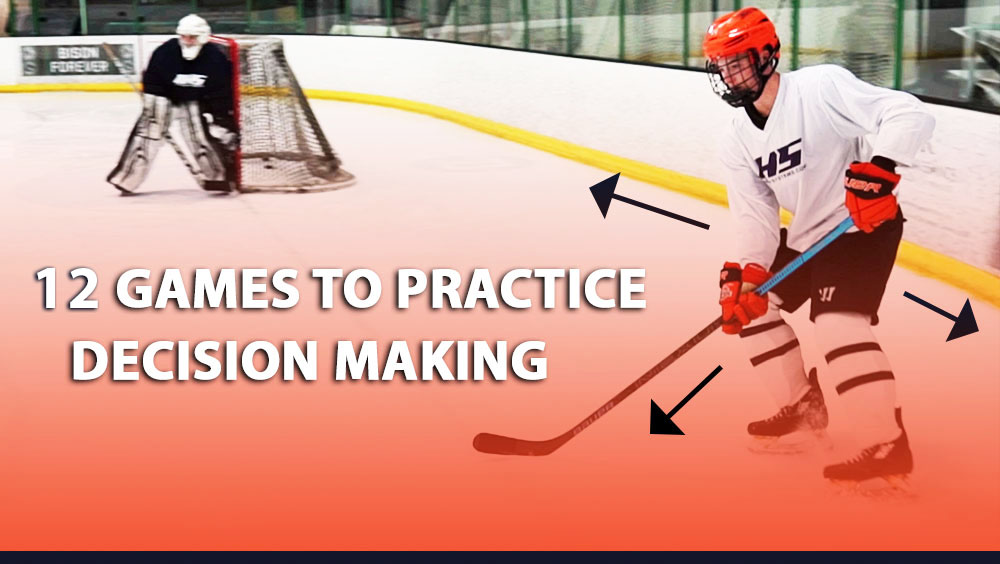 The talent of hockey players continues to rise. Players are quicker, faster and more skilled than ever before. However, one major training component that coaches often overlook is adding in activities that force players to practice their decision making. There is a big difference between hockey drills that require a pre-determined course of action and ones where the players are allowed to make all of the decisions. In the process of searching for drills to use in practice be sure to include ones that allow players to make decisions.

Below we give you 12 small area games where the "game" is the main teacher. The games are excellent for all age and skill levels since the players will be playing with and against their teammates. Players will rapidly learn that if they do not pick their head up and make a quick decision, they will fail. Also, the games will reinforce important concepts like communicating with teammates, reading the play, creating time and space, jumping to open ice, protecting the puck, passing in tight areas and more.

These dynamic games will help your players build confidence in their ability to pick up their head and make a play. Plus, your team will love them!

The Corner 3 vs. 3 is a quick thinking game that helps players develop a scoring mentality. Watch Topher Scott explain this game with a video example below:

Corner 3 vs. 3 Game Description: The Corner 3 vs. 3 helps players develop a scoring mentality with quick thinking and movement. This 3 vs. 3 game has one major constraint: each team is allowed one player that can play inside of the circle. The other teammates must play on the outside of the circle. Communication, quick passing and quick shots will help teams be successful in this game.

2v2 or 3v3 Picket Fences Description: Picket Fences is a great game that gives both the forwards and defenders goals to strive for. Forwards get 2 points for scoring a goal and the defense gets 1 point for skating the puck out of the zone. No points are awarded if the coach blows the whistle.

Corner to Half Wall 2 vs 1 Description: This game forces players to practice 2 on 1's and using the boards in a tight area. The goal for the forwards is to connect on 4 passes in a row. If the forwards get 4 passes in a row, they are awarded a shot on net. If the defense breaks up the play 2 times they are awarded a shot on net. Make sure players use the boards for puck protection and bank passes!

Gates of Buffalo Description: The goal of this game is to pass the puck through as many "gates" as possible. Players are not allowed to pass through the same gate 2 times in a row, so it requires players to communicate with each other and work to move to open space and open gates. You can have the group compete against other groups for most successful passes in 45 or 60 seconds.

Run Ragged Description: The emphasis of this hockey game is to get forwards moving without the puck. As soon as the game starts, the coach passes to a forward. The forward must pass to their teammate and immediately jump to an open cone. They are only allowed to leave a cone after they make a pass. After 5 consecutive passes, the forwards are awarded a shot on net. If the defense intercepts the pass, the game starts over with a new puck. The defense should focus on stops and starts with an active stick.

Watch the video explanation from Topher Scott below to learn about the coaching points of The Union Scoring Game, along with a video example below.

The Union Scoring Game: The Union Scoring Small Area Game from Topher Scott is a fun small area game where teams can score on either net. The unique setup of the nets promotes creativity, thinking outside of the box to create time & space and score goals.

Continuous In Zone 2 vs. 2 Game Description: This game puts the defense at a disadvantage since they will be double shifting. The defense must work on good positioning and have their stick on the ice to be successful.

Swedish 2 vs 1 Description: This is a simple yet highly effective small area game that requires 2 players to work together to connect on 4 passes in a row. If they get 4 passes in a row they are both awarded a shot on net. If the defending team breaks up the play 2 times, they are awarded a shot on net. It is similar to the Corner to Half Wall 2 vs 1 but there is no boards to utilize. Players should work on deception to open up and expose the defender along with short passes and jumping to space.

Swiss 4 vs. 2 Scoring Game Description: A fun small area hockey game that helps the offense work on their decision making by creating passing & scoring opportunities by keeping head up, being patient, using deception and communicating with their teammates.

Keep Away 3 vs. 1 Description: This game is as simple as it sounds. A group of players tries to keep the puck away from a defender. Players must keep their head up, communicate and move to space to be successful. Defenders must work on keeping their stick on the ice and not to chase too much.

Hit The Tire / Corner Tires Description: A fun game that can be used with no goalies. Players work to score goals by hitting the tire.

Levels 3 vs 3: A small area game that challenges players to think on their toes with a different net setup and a requirement to pass to a coach (or player) on the outside of the playing area before they attack.

Finnish 5 Puck Description: The Finnish 5 Puck is a progression of activities that starts with an individual warm-up, then advances to a group exercise where players work together to pass 1, 2, 3, 4, and eventually 5 pucks at once. It is a great way to start practice with some decision making!

This game will look extremely messy at first but as time goes on, players learn how to communicate with each other verbally and non-verbally to complete passes. The dynamic nature of this game forces players to keep their head up and make decisions by reading and communicating with each other. If a coach commits to an activity like this throughout the season, you will marvel at the teams' improvement throughout the year.

Click on the image below to draw and share your own small area game for free! Make sure to include two teams and a way for each team to score points. Get creative!

Adding small area games and activities like the 12 games listed above will help your players work decision making, which will improve them as a hockey player. Additionally, as a coach, you can brainstorm and modify some of your current drills to make sure a player does not always have a set path and that they need to make a decision on their way to completing the drill.

The best part about these games? Players enjoy them and will work harder because the games will naturally bring out the competitive spirit in each of them. Adding games like this will make your practices more enjoyable.

Extra credit: It should also be noted that players can improve their decision-making abilities by developing their puck protection skills, which can allow them to protect the puck longer if they need to, so they can make a better decision. Also, spending time stickhandling at home with their head up is extremely beneficial!