The ADM model set forth by USA hockey and their endorsement for small area games has made this term much more popular among youth hockey coaches, especially here in the United States.  There are a wealth of games that are great fun and great for development and I think it is important to choose games that are relevant to your purpose.  The small area games listed below focus on tight spaces.  The players can expect to have a lot of touches, but the touches are quick and demand quick decisions and reactions.

The players and goalies will love this small area game.  This game will naturally result in quick puck movement and many shots on net.  Make sure to look at the diagram for the  correct way to set up it up.  Basically the game is played within one of the circles with a net on both ends. It is a three vs. three game where the offensive team has a three on one advantage.  Tow players from each team are place at the side of the net that they are attacking.  The other player is inside the circle on the defensive side of the circle.  The coach will put a puck into play by passing it to one of the players.  The offensive team will then have the three on one advantage with two players to the side of the net and their third player in the circle, however the third player has to stay on the defensive halkf of the circle. When the other team has the puck, this player has to play defense.  To get a better explanation, you may want to view the animation. 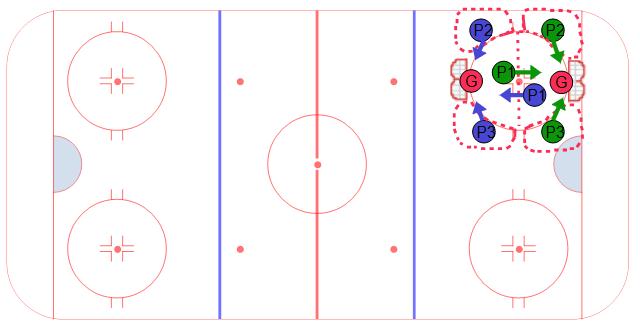 2 versus 2 in the corner

This drill is all about puck protection and using the body to protect the puck or tak it away.  The diagram shows the nets placed about 15 feet out from the corner and facing the corner.  The coach should be off to the side and behind the net ready to put more pucks in play in case they leave the playing area (don't stand right behind the net).  The coach will out a puck into play and the players go two vs two and try to score.  The rules are simple, the player that scores earns a point for their team. There are no requirements for minimum passes, players can score at any time.  Once a goal is scored or the puck leaves the playing area, the coach puts another puck into play right away.  Run the drill for about 30 seconds and then switch out the players.  The players should be learning how to use their body to gain advantages in loose puck situations and protecting it when they have possession. 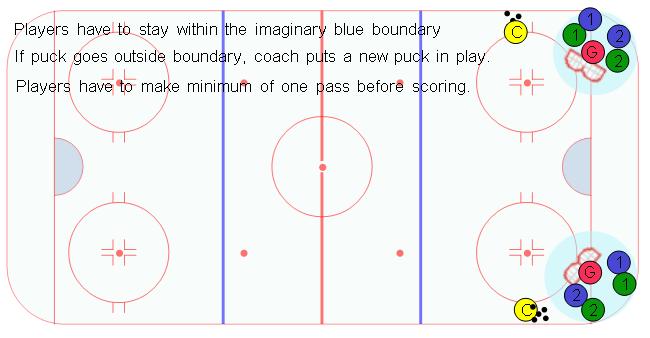