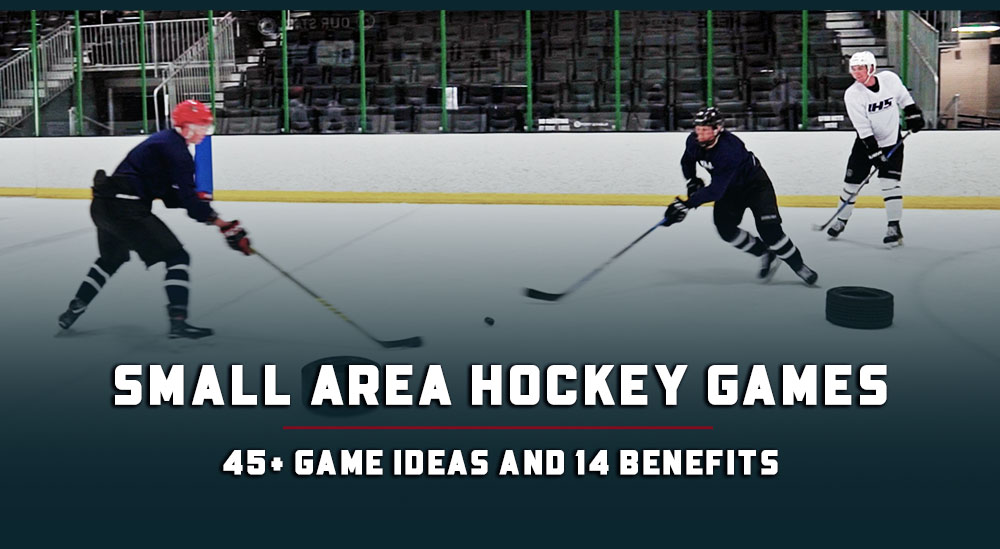 Coaches, are you using small area games in your practices?

It is no secret that small area games are massively beneficial and coaches all over the globe are implementing them into their practices for a variety of reasons. They can help U8 players learn the game of hockey and even help NHL pros keep their competitive edge during the Stanley Cup Finals.

Below, we dive into 14 reasons why small area games are beneficial, along with supporting comments NHL players and other professionals below. We also show 45+ small area games that you can implement into your practices immediately. Let's get started!

First, what is a small area game?

A small area game is exactly what it sounds like. It’s a game or activity that is played within a smaller surface than a “normal” full ice hockey game. The small area games can be set up to be cross-ice, or in a zone, or in a section of a zone. The best small area games are designed to mimic particular situations that occur multiple times throughout the course of a full game.

As Tony explains, small area games are great for competition, battling for loose pucks, puck protection and creating scoring chances in tight spaces. There are even more reasons to love small area games and below we highlight 14 main reasons below.

Small area games are fun for beginner hockey players and the most skilled players on the planet. How is this possible? Humans love games and competition, no matter your age or skill level.  During small area games, players are constantly moving and always involved in the play since there is less space. Additionally, the freedom & creativity that comes with a game has been shown to be much more enjoyable for players vs standing in line wasting time waiting to do a static drill.

2) All Ages and Skill Levels Benefit

No matter the age or skill level, players benefit from small area games because they are working harder, always moving, touching the puck more and experiencing game-like situations over and over again.

Small area games will naturally bring out the competitive spirit in practice as each team battles to score goals and win the game. In static drills, players can get bored skating around cones in a pre-set path.

Small area games will force players to work on their decision making skills because there is no pre determined route that they must take to score a goal. Players must read and react to the ever changing game. They will be left behind and lose the game if they stand still.

5) Players Learn to Play as a Team

Players learn they need to communicate verbally and non verbally with their teammates if they want to be successful in the games. In the Swedish 2 vs 1 Small Area Game below, forwards need to work together to connect on 3 (or 4) passes in a row. This simple small area game gets forces forwards to communicate, keep their head up and jump to open space if they want to be successful.

Additionally, players are rewarded if they "win" this drill which encourages extra competition. Both forwards get to shoot on net if they get the required number of passes in a row. Defenceman are rewarded with a shot on net if they break up the play twice. The reward and extra incentive encourage the players to work harder and to have fun with the drill. As a coach, how can you reward and encourage certain behaviors?

7) Learn How to Apply New Skills

Instead of just playing a normal 3 on 3 game coaches can reinforce new skills or concepts by modifying set up or rules of a game.

For example, if the players were taught about One Timers earlier in practice, a coach can enforce a rule that gives 2 points for a goal that is scored by a One Timer vs 1 point for a normal goal.

This slight game modification will encourage players to go for the 2 points. This helps players apply a new skill they just learned and will show them the benefit of what happens when they surprise a goalie with a One Timer.

Playing a small area game gives players the opportunity to handle the puck and pass more often than if they were playing in a full ice game or scrimmage. The increase in puck touches allows the players to get comfortable with puck handling and passing in traffic which will develop their skills much faster than if they were only playing in full ice situations with limited touches.

Boston Bruins forward Jake DeBrusk, former Vancouver Canucks Coach Perry Pearn, and other NHL players talk about why they like to train with small area games in the video below:

Did you know that statistically speaking a youth hockey player will only be on the ice 8-12 minutes per game and handle the puck for less than 36 seconds during those 8-12 minutes?

Strength coach Micheal Boyle speaks about eye-opening statistic on instagram here. He points out that more full ice games and tournament teams are not advantageous for youth hockey (or any sport) development because most players will handle the puck for less than a minute during a full ice game.

Have you ever seen a youth hockey goaltender sit in net at practice and take a string of 30+ shots in a row as every player comes down and shoot for the corners? More often than not, the goalies are taking pucks off of the head or endlessly going down in a butterfly which can be detrimental to their hips and knees. Small area games allow goalies more game like situations where they are forced to read, anticipate and react to a play. This allows them more realistic and quality shots.

Justin Goldman, Founder of The Goalie Guild, stated “Small area games have so much value for goalies because they are forced to adapt to different rules and patterns of play.

This might be uncomfortable for some, while others love the fact it's different from the normal drudgery of a team practice. So it's not just the quality of the shots and all the awesome battling and desperation that ensues, it's also learning how to be creative, how to read and react to different situations, and how to thrive in an unfamiliar environment that forces them to adapt their game plan and their save selections.

They're a great way to help goalies feel comfortable in uncomfortable or unfamiliar situations. Plus they're straight up fun.”

Instead of only having one player at a time skate through a static drill and the rest of the team standing in line, multiple players can be involved in a game once.

Coaches should encourage players that are not in the game to be vocal and cheer for their teammates that are playing in the game. A vocal practice will ramp up the intensity and keep everyone involved. Additionally, coaches can use “resting” players as outlet passes or bumpers to keep the puck in play.

11) Can Be Set Up In Limited Ice Space

With the cost of ice rising, most teams are sharing ice or splitting up ice into stations to work on various skills or concepts. Small area games can be set up in 1/2 ice, 1/4 ice, 1/8 ice or within circles or corners. Below is an example of how much space the The Corner 3 vs. 3 Game takes up. As you can see, the majority of the ice is left open for a variety of other uses, such as skill development, drills and additional small area games. 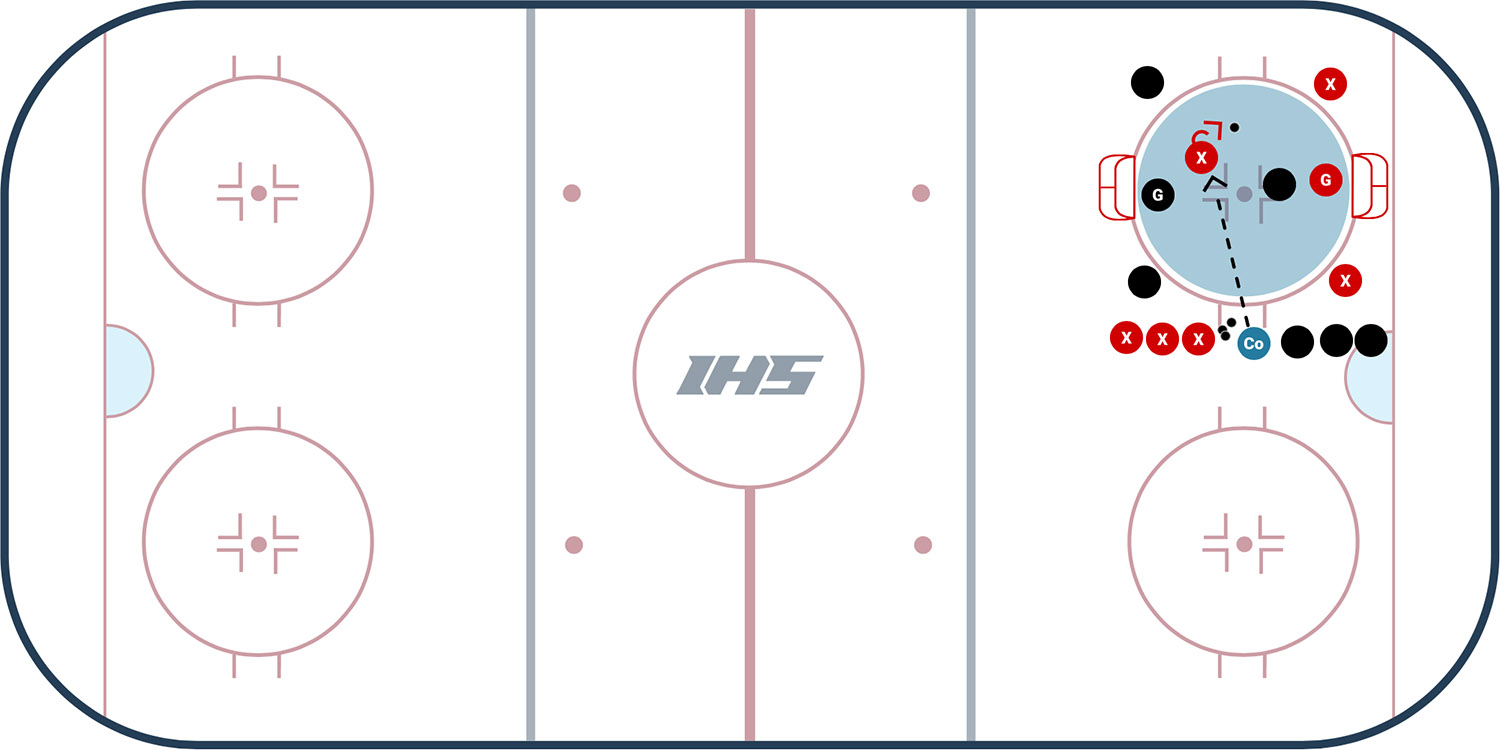 The Corner 3 vs. 3 is a quick thinking game that helps players develop a scoring mentality. Watch Topher Scott explain this game below:

Corner 3 vs. 3 Game Description: The Corner 3 vs. 3 helps players develop a scoring mentality with quick thinking and movement. This 3 vs. 3 game has one major constraint: each team is allowed one player that can play inside of the circle. The other teammates must play on the outside of the circle. Communication, quick passing and quick shots will help teams be successful in this game.

Utilizing the ice efficiently will allow coaches to teach more and keep the players constantly engaged and active as they progress through each station or section of the ice.

12) Don’t Have to Waste Time on “Conditioning Drills”

In small area games, players are mimicking real game movements with tight turns, crossovers, pivots and constant starts and stops. These reactionary stops and stars are much more challenging than normal down and back sprints.

Players are also working harder to win the game. Therefore, it has been found that players are not only working harder in small area games, but they also use their reaction time, work on important skills and become better conditioned then only doing standard sprints.

Coaches can brainstorm creative ways on how to reinforce what they are trying to teach. Instead of only playing a normal 3 vs 3, how can you reinforce a skill you are attempting to teach? We gave the example of Shooting in Stride earlier in this post, but what other beneficial behaviors can you reward? Passing off of the boards? 3 passes before a shot? Need to pass to the point before you attack? Can only score on a one timer? Etc, etc. The options to teach are endless.

Well-designed small area games can mimic certain game situations that occur multiple times throughout the course of a full game. You can easily create your own small area games by doing the following:

Different rules within a game will require all players to be more alert and creative with how they play. We give two examples of this below

Example # 1: Levels: watch the Buffalo Sabres play a 3 vs 3 Small Area Game during their development camp commonly that forced all players, coaches and goaltenders to be on their toes. As time went on and the players got more comfortable with the game, you could tell they absolutely loved it.

In Levels (the video above), the rules are:

Example # 2 (below): Gates of Buffalo Small Area Game: a great drill to practice moving to open spaces. Instead of just skating and playing a game with their heads down, players need to keep their head up, communicate with each other, and move to open space to score a goal on one of the "gates." Look at the players playing with their heads up and turn the volume up and listen to the communication! A drill like this really helps players to play like a team and practice decision making. To view the full game details, click here.

As a coach, should I only use small area games during practice?

No. Small area games are HUGELY beneficial but they are even more beneficial if you utilize them to drive home a skill or specific concept. A practice with a warm-up activity, drills to develop a particular skill (or concept) and small area games to reinforce the skill (or concept) will provide a variety of structures for players to learn and have fun applying new skills to the game.

Use the example of Shooting in Stride discussed in Benefit # 6 to see how you can reinforce new skills by teaching, practicing in a drill, then reinforcing them in a small area game. 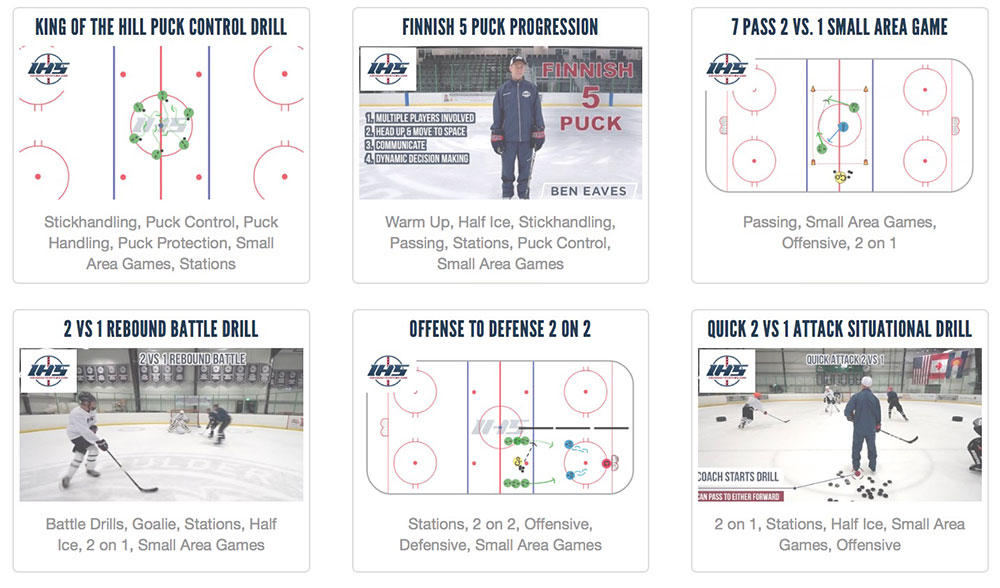 Draw Your Own Small Area Games

Click on the image below to draw and share your own small area game for free! Make sure to include two teams and a way for each team to score points. Get creative!

Have you created or found unique small area games that you want to save for future reference? If you are a member of Ice Hockey Systems you can upload, share and add notes to games that you create or find around the web by simply clicking on “Upload Drill” in your member dashboard. You can add images, links and videos from YouTube & Vimeo. Become a member today.