How to Structure your Hockey Tryout 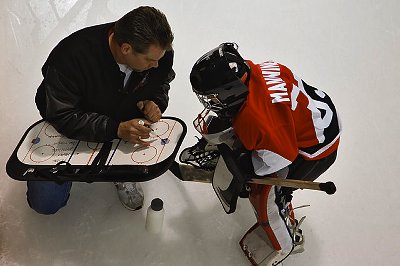 Having a well structured tryout will give you the best chance to put together a team that you are confident in. You never want to leave tryouts with a sense of doubt and you never want good players to leave tryouts thinking they didn’t get a fair shot. This segment will provide advice on the best ways to structure an efficient hockey tryout so you are able to get a good evaluation and feel comfortable with your selections.  A key element for a good tryout is a good set of drills that allow you to evaluate the players properly.  You can refer to our hockey tryout drills page or a blog post on 5 drills your hockey tryout should include to get ideas.

It’s not easy to determine how long your tryouts should last. A lot of it depends on the organization and the number of players that are trying out, but I will try to set some recommendations for certain situations. I truly believe to get the best evaluation you should never have more than 30 skaters (not including goalies) on the ice at once. If you do have 30 skaters or more, I highly recommend to start with two separate sessions with half of the players skating in each session so you can narrow in and dedicate more attention to each player individually. I have been at tryouts with over 50 skaters on the ice and I felt like my head was going to explode trying to evaluate them. If you don’t have the luxury of available ice time to run separate session for the initial look then I would cut your available ice time in half. You’re better off having a closer look in less time than getting players lost in the shuffle. The argument can be made that you need to have everyone on the ice at the same time so you can compare them better, but for the initial round of cuts, that shouldn’t be the case. Eventually when you narrow things down, you will have all of the players competing for the team on the same sheet of ice, which will give you some good comparables.

I think it’s important to give everyone their fair chance at making your team, but you also don’t want to waste time. If a player just doesn’t have the skill set to play at the level you are coaching, don’t be afraid to let them go early. It’s going to happen at some point, so if you have a lot of players trying out I recommend getting rid of the bottom of the barrel sooner than later. It will allow you to take a closer look at the players that have potential to make a large impact on your team and it will also help evaluations, because the players will be competing against players that are at similar levels. It’s easy for someone to look good playing against weak players so the sooner you can narrow it down to just the players that really have a chance of making the team the better it is for everyone. Of course hockey is so much more than just skill, but if a player is lacking the basic skills to even skate on the same ice as the other players, it’s time to part ways. Our segment on cutting players is coming shortly, so be sure to check back to get ideas on how to handle cutting players respectfully and keep them encouraged to stay with the game.

There is a lot of debate as to how to structure the actual tryouts. How much time should be spent on drills vs. spent scrimmaging, when to let players go, etc? Once again, a lot of this depends on how much ice time you have, but no matter what you need to end up putting players in pressure situations and see how they react to competition. Below is my recommendation on how to structure a typical 3 session tryout. Every team will have different amounts of ice time and players trying out, but this should at least give some guidance on developing a structure that fits your circumstance.

The skating, shooting and passing drills are important for evaluating each individual’s skill set. I firmly believe that nobody should make your team based on how they look in a drill. A lot of times, these skills don’t transfer over to game situations. Therefore, I don’t recommend using these drills to determine who makes your team, rather use them to help determine who you think would struggle. A lot of times, these drills can really expose players who lack the skill set to even compete for a position on your team. Once again skill isn’t everything so be careful, but if a player is lacking the ability to keep up with the others, there’s a good chance these type of drills will expose that.

Setting up drills with battle situations (1 on 1’s, 2 on 2’s) will show you a player’s will, determination, grit and compete level. Sometimes the players that don’t impress in the skating and skill drills will really shine in the battle drills, and a lot of times the players that shine in the skating and shooting drills are dull in the battles. It all depends on the style of team that you are putting together, but I usually weigh the performance in the battle drills a little more than the skill drills.

Having a scrimmage in a tryout is an absolute must. Some coaches won’t have the players scrimmage during the first session of a tryout, but I think it’s critical to include scrimmage time in every tryout session that you hold. You need to put the players in game scenarios to see how they react. So many times players show their strengths and weaknesses when they are in complete game mode. Having a scrimmage on the first day should at least expose your top 4 or 5 players and give some confirmation as to who you thought were your bottom 4 or 5 (possibly more).  This should play an important role into who sees the ice in the next session. I don’t think the first scrimmage can be weighed too much for the middle of the pack – they may be having an off day, they may not have chemistry with their line mates or d-partners, etc, but I think it’s good for identifying the top and bottom players.

Your goal after the first session should be to identify your top and bottom players so you can get a really good look at the middle of the pack in the second session. If you have some players that are extremely weak and don’t have a shot at making the team, then I think it’s best for everyone if you cut them before the second session begins (depending on how many players you have trying out you may not want to). It’s important that you really start to narrow things down for the second session and having less players to look at will help you do so. If you have a lot of players, I would even consider sitting your some of your top players for the second session and let them know you are impressed and will have them back for the third session for competition purposes. You never want to guarantee someone a spot on the team after one tryout, but if they are really standout players and you know them well, I think it’s a good move to sit them if you are overloaded with players to evaluate.

Goal: Try to plan out your roster and determine the bubble players

Session 2 should consist of some skating and skill drills, but the concentration should be on how they handle competition. A heavy focus on battle drills and a lengthy scrimmage should help you give you some clarifications on how your roster is shaping up. If you are coaching at an advanced level it may be good to go over a defensive zone coverage a forechecking system in the locker room before the second session so you can see how well they listen and understand the game. This can expose some details that you may not otherwise notice.

The goal of the second session should be to plan your roster out and determine which players are on the bubble. This is crucial to have this figured out going into the third session. Once again if there is anyone who can’t keep up with the pace, it’s good to let them go before the third session. You need to have your full attention on the bubble players for the third session, so make sure that you have these players identifies by the end of Session 2.

Goal: Be comfortable with your final roster

For session 3 I recommend having all of your top ranked players on the ice with all of the bubble players. You should focus mostly on the bubble players, but keep an eye on everyone just in case you may see something you don’t like in a player you might have thought was a shoe-in. For the bubble players I think it’s important to have put them on a line or d-pairing with some of the better players to see how they fit in. We will get into the best way to evaluate players in a later segment of our tryout blog, but this is the session where you should be looking and listening for the little things that the players are doing.

This is the time to have your complete focus on how they perform in game situations and how they handle adversity. Unless you still have some questions about goaltending, this session should only consist of a scrimmage and battle drills (if necessary). Before the scrimmage I think it’s important to talk to the team and let them know what you are looking for. They should be playing their hearts out and you should give them the motivation so they give it everything they have.

As the scrimmage goes on you need to start making some decisions. Try to narrow things down as much as possible. If you have your final roster figured out, I would have them scrimmage the entire time, but if you still have trouble inking the final roster, I recommend leaving a good 10 or 15 minutes for some battle drills. It’s never easy making a decision between the last few players, so I like to put it in their hands. Taking style and personality out of the picture, I don’t think there’s a better way to determine who to pick for the final few spots than to have them line up against one another in battle drills. Having them battle at the end of practice will show you their stamina and mental toughness, and I think it’s a great way to end a tryout. This should help you in making the final decisions that are always so tough. At the end of your last session you should feel comfortable with your final roster.

Of course, every scenario is different. If you only have one session for tryouts, then I recommend using the structure laid out in Session 2. If you only have 2 sessions, then I recommend using the structure in Session 2 and Session 3. If you have 4 or more sessions, then you can repeat sessions or mix them a little bit differently than above, but I recommend ending with almost all scrimmage and battle drills.

Hopefully this gives you some good ideas on how to structure a tryout that fits your situation.

Our next tryout segment will include 5 skill and battle drills that we recommend you run in your tryout to get the best evaluations, so be sure to check back soon!

Can you help me find or provide an evaluation sheet that can be used for multiple players at once to make the process easier and more efficient?