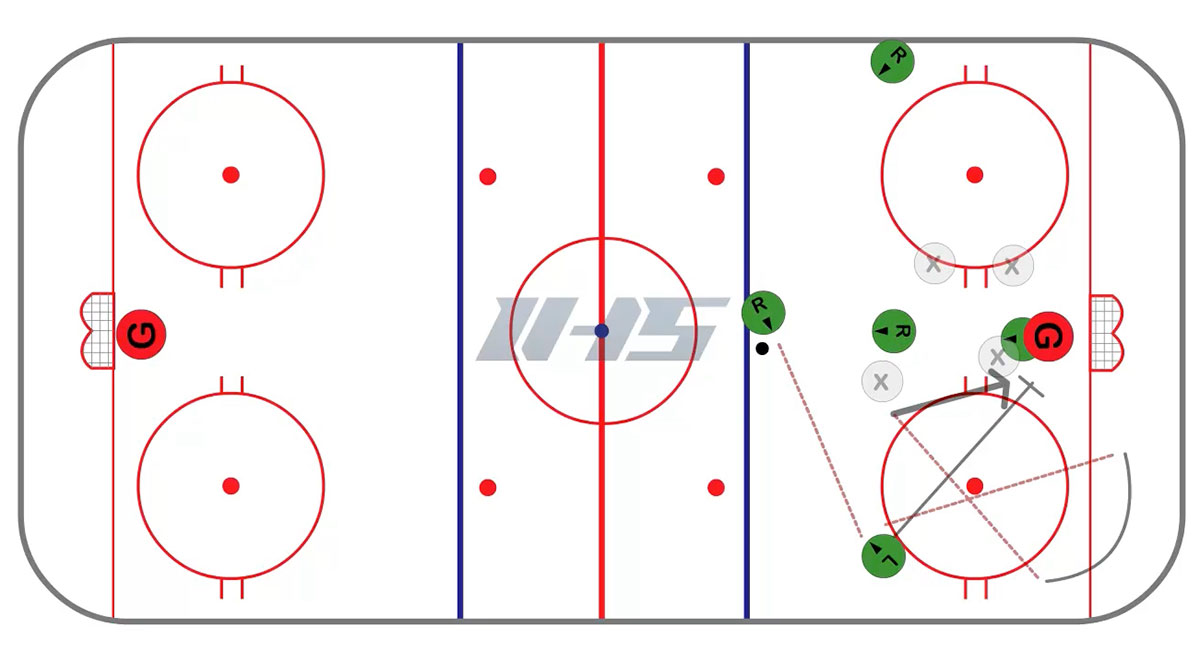 A hockey practice that focues on the power play is not to be confused with a practice where you play power play versus penalty kill for the entire practice.  There are lots of drills that focus on skill sets that can be used while leading up to a power play scrimmage.  Some of the key points of emphasis on the power play are puck possession, timing, shot selection, moving away from the puck, quick puck movement, and hitting the net.  Many of these are very simple and can be thrown into that category of "the little things" that coaches love to preach. Below are 4 drills that you can use to lead up to a scrimmage, each one has specific focus and works on a skill that can be beneficial to a power play.  The diagram for each drill is located at the bottom of the page.

The best way to create scoring chances is by taking advantage of the 2 vs. 1 opportunities.  This passing drill is very simple yet the 2 vs. 1 concept is embedded.  Players need to focus on tape to tape passes, calling for the puck, and quick puck movement.  The first two players that are passing the puck make four passes.  Then the first player passes to the third player and skates around the circle to get the puck right back from the third player.  Each player then rotates around the circle one position while they keep moving the puck.  Once they are back in the starting position, the players in the first two positions make another four passes back and forth and then the hockey drill repeats itself.  View the animated ice hockey drill to get a better understanding. 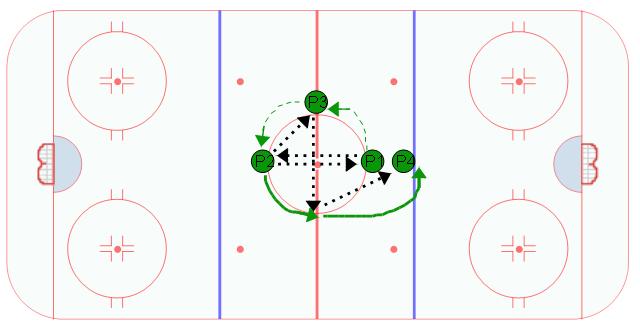 This is more of a small area game but it is great for teaching principles of the power play and penalty kill.  This can be run out of both ends at the same time.  The players are split into teams of 2 and they will keep score, which adds a competition factor to the game.  Set up the drill as shown in the diagram with four players in their respective areas, the players on the same team are on opposite sides of the box.  The two defenders are inside the box and their goal is to not allow any passes through the box and try to break up a pass.  The only way they can get out of the box is by creating a turnover.  The players on the outside have to move the puck around, they are only allowed 1 stickhandle and then they have to pass the puck.  These players have to stay between the cones as shown on the diagram.  If a team passes thought the box to their teammate then they receive a point.  If a pass is broken up by the defenders then the last offensive player to touch the puck has to go into the middle with their teammate. The players on the outside passing the puck have to be moving without the puck at all times.  The better they move the puck around and move without the puck to provide support, the more the middle will become available to make a pass through the box.  View the animation of this hockey drill. 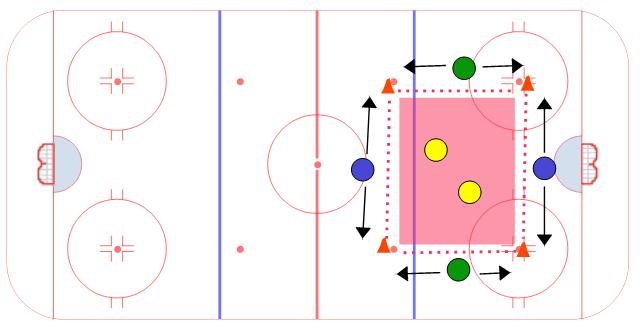 This power play drill works on a skill that is handy no matter what type of power play you are using.  As a coach you love to see a player have the ability to exploit the seam and get into a dangerous scoring position.  For defense, this drill provdes an opportunity to receive a pass and walk the puck to the middle of the ice, another common skill for the power play.  A slight modification to this drill allows the defense to shoot it from the point with the other player going to the net for a screen, tip, and rebound. 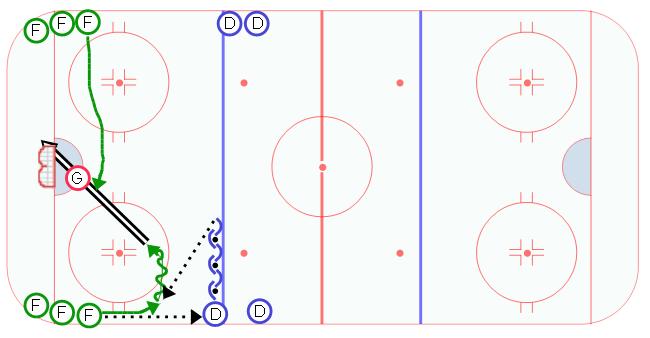 The first two hockey drills focuses on in-zone skills and now we explain a breakout drill that focuses on timing and coming up the ice together.  In order for this drill to work the players have to make sure they are supporting the puck, making good passes, and not getting too far ahead of the play.  They should be making horizontal passes all the way up the ice.  It is a simple drill, the defense make a pass as they come around the net to the player along the boards.  The defense need to stay inside the dots and behind the puck carrier in a good support position.  The defense then receives the puck back and passes to the third player.  After this pass the group skates down the ice in a three man weave. 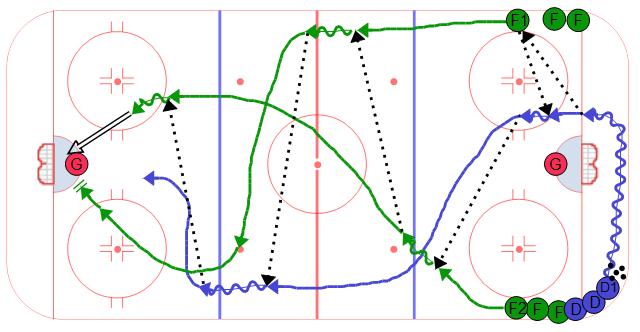