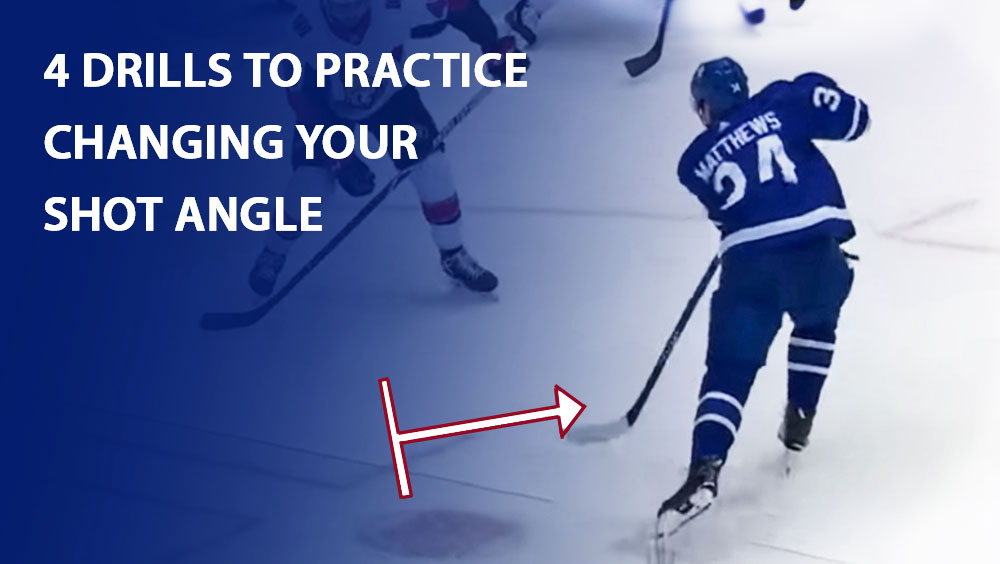 As each season passes by, the science of goaltending continues to improve and evolve. This evolution has made it harder for players to simply fire a puck and hit the back of the net.

Goaltender angles and movements are scientifically measured to reduce open areas of the net. The butterfly is commonplace and goalies of all age levels are able to track pucks with t-pushes and shuffles. As a result of this, it is critical for players to work on new techniques aimed at surprising and confusing goaltenders.

However, right now, we are going to dive into 4 shooting drills you can do with your team (or yourself) to practice pulling the puck to change your shooting angle.

To fully understand this skill, we put together 4 examples of Auston Matthews performing this skill to perfection. Watch below!

What did you see in the video above?

As you can see, when Matthews pulls the puck, it confuses the defense and goaltender. Even if the goaltender was able to save the puck, this type of shot is harder to track, which means there is a greater likelihood there will be a juicy rebound for your team to pounce on.

Below are 4 exercises and one small area game to help you learn the fundamentals of pulling the puck to change your shooting angle.

Please note, even though this is an extremely valuable skill, it is a hard skill to master. Start slow when working on each of the drills demonstrated below. Mistakes will happen as you practice the movement. That is ok and part of the progress! Once you are comfortable with a drill, increase the speed, work on picking your head up and increase the distance (or angle) of the pull.

Also, in these examples, we used cones and a broomball hockey stick. Do not get fixated on our props, you can use ANYTHING! Use tires, hockey sticks, broken sticks, pucks, your imagination, markers, and any other objects to practice changing your shot angle.

Drill # 1: (above) is a stationary progression that allows you to work on the fundamentals of pulling the puck into your body while you are shooting. You can practice this on or off the ice. You will notice that the stick on the ground is placed in three different directions. First placement is the easiest to pull around, while the third option is the most challenging. Focus on bringing your top hand elbow up as you pull the puck into your body while you shoot.

Drill # 3: (above) can be a drill that is used independently to practice the skill, and it can be set up to be a really fun challenge for players.

For The Drill: Set the puck up so a player needs to skate up to the puck, pull the puck and fire a shot on net. You can place the puck further away for an added challenge. Or you can set up the angle of the stick on the ground in a particular way to make it easier or more challenging to pull the puck (see drill # 1 for angle options). For variations to this setup you can have the player shoot around a net (instead of the stick on the ice), or skate up to the obstacle with the puck.

Before we show you the drill, watch an example of Sebastian Aho pulling the puck back to evade a poke check before he pulls the shot into his body to change his shooting angle. This drill is labeled as extra credit because it is extremely challenging.

What did you see Aho do differently in this video than the other examples above?

Drill # 4: (above) was called the "Aho" for Sebastian Aho. This Toe Drag Pull is an extremely hard skill to dial in, so start slow and have fun with it! You can work on using a toe drag to pull the puck back like Aho did in the video, or (if the toe drag is too hard) you can start with or a normal pullback (like Matthews did in the last clip of the video above). Whether you use a toe drag or a normal pullback, aim to bring the puck back by your heels before you pull it in for a shot. The main goal of this move is to evade a pokecheck and change your shooting angle.

To really drive home the teaching and application of this skill, set up a normal in zone 3 on 3, or a quarter ice 2 on 2 game.  Award 2 points for a "Pull Shot Goal" and 1 point for a normal goal. This will encourage players to work to apply their "Pull Shot" in a game like situation.

Obviously changing your shot angle is not an easy skill to tackle. Like all good things, it takes time. Even though it is a harder skill to master, if the pull shot is executed, it will confuse the defense and goaltender which can increase your scoring chances or help you get a shot though to generate a rebound for your team.

Progressions to Keep in Mind with Each Drill

3 Body Mechanics to Keep in Mind

If you want to spice up ANY shooting exercise, just add a cone to any shooting drill and encourage players to pull the puck to shoot around it. View how easy it is below: