Do you ever question why hockey is played with 3 forwards and 2 defenseman? Is that the optimal line-up for every team? Other sports seem to have more variations in their formations so maybe the typical 3 forwards and 2 defense is not the optimal formation for all teams. For example, soccer uses all sorts of formations depending on the strength of your team, the strength of the other team, or a certain coaching philosophy. In hockey, regardless these variables we always seem to play with the traditional 3 forwards and 2 defense. The system described, diagramed, and animated below breaks this traditional mold and uses 1 forward, 3 middles, and 1 defenseman.

This system will allow your team to outnumber opponents low in the defensive zone and be extremely aggressive in the offensive zone. This system uses slightly different terminology for the positions which are the following:

The forward and center middle have a lot of freedom to just play without thinking about position too much. Ideally, the left and right middle players have to be smart and disciplined while the defense has to be aggressive and a good passer.

In the defensive zone the designated defensive player will always be on the strong side of the ice (the side the puck is on). Their job is to pressure, win battles, and create turnovers. They have the freedom to chase the puck from side to side. 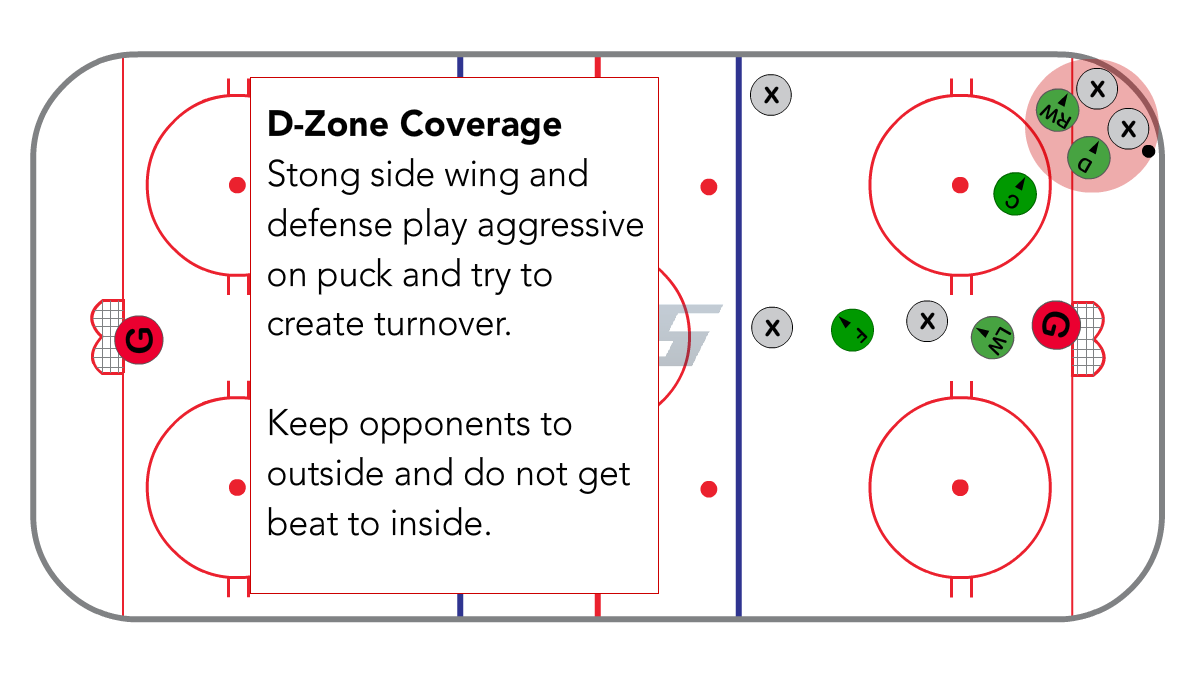 The Center is typically responsible for the 2nd layer. They should use the dots as a guide and look to protect against any breakdown if the defense and strong side wing get beat out of the corner or along the wall. They should look to capitalize on any loose puck and often can initialize the breakout. 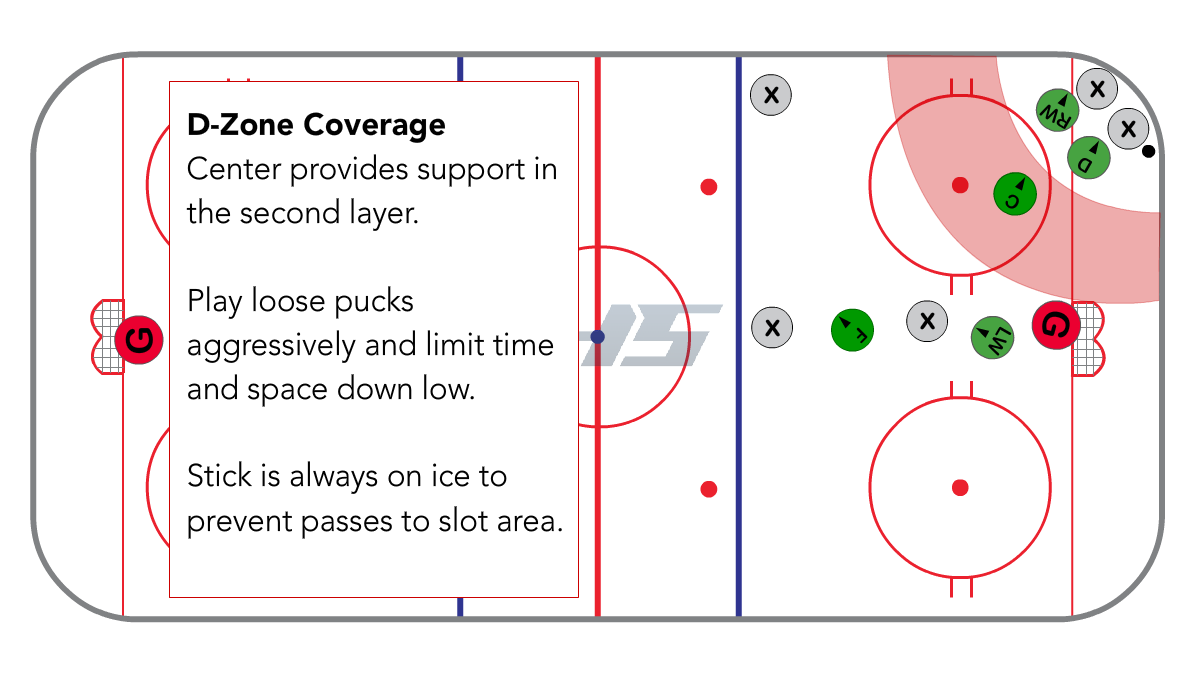 The forward has the easiest job in the defensive zone. Their job is to stay in the high slot and make sure the opponents' defense does not get a good shot from the high slot. If the opponents' defense along the wall gets the puck they simply make sure they do not make a pass to the other defense. When the forward’s team gets possession of the puck then they immediately sprint out of the zone into the neutral zone on the same side of the puck. This does two things: 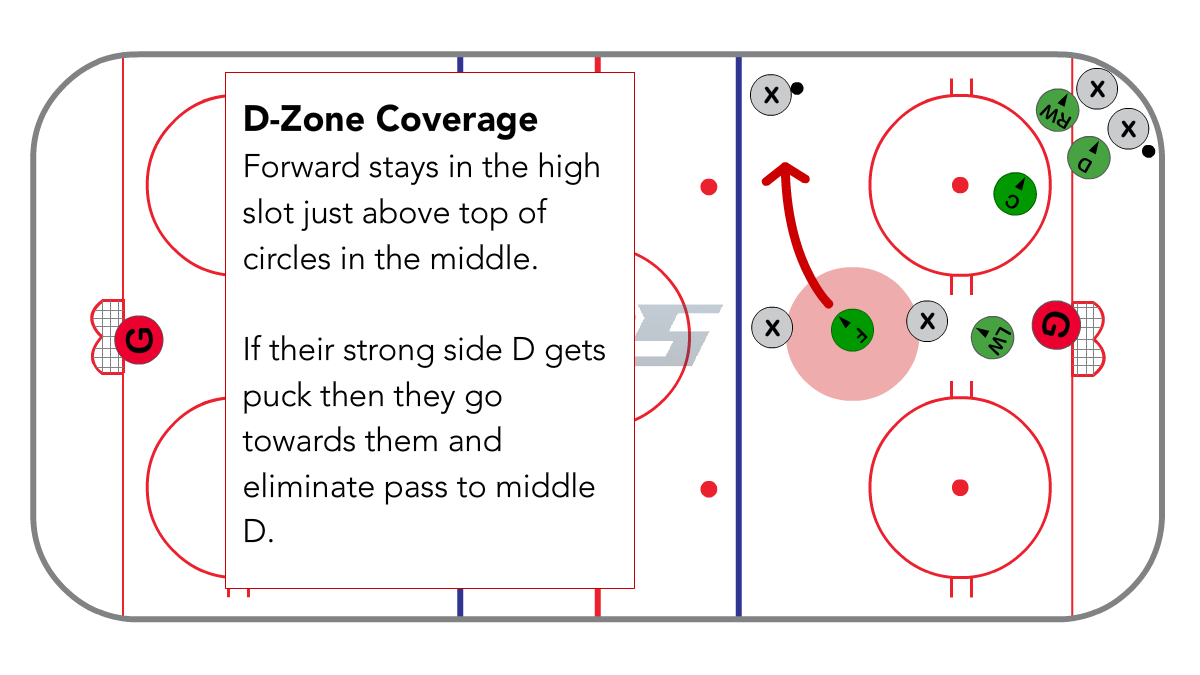 The responsibility of the defense in the offensive zone is to always be on the strong side (same side as the puck). They should play aggressive and hold pucks in along the wall when possible. They need to be careful if the weak side wing is not supporting on the blue line in the middle of the ice. If there is no support from the weak side wing then they should not play as aggressive when trying to hold the blue line.

The center mid has to be hunting the puck all over the ice in the offensive zone. They should always be supporting and working with the forward to create a turnover to get possession of the puck. They also have to be responsible to backcheck through the middle of the ice the moment the opponent gains possession. 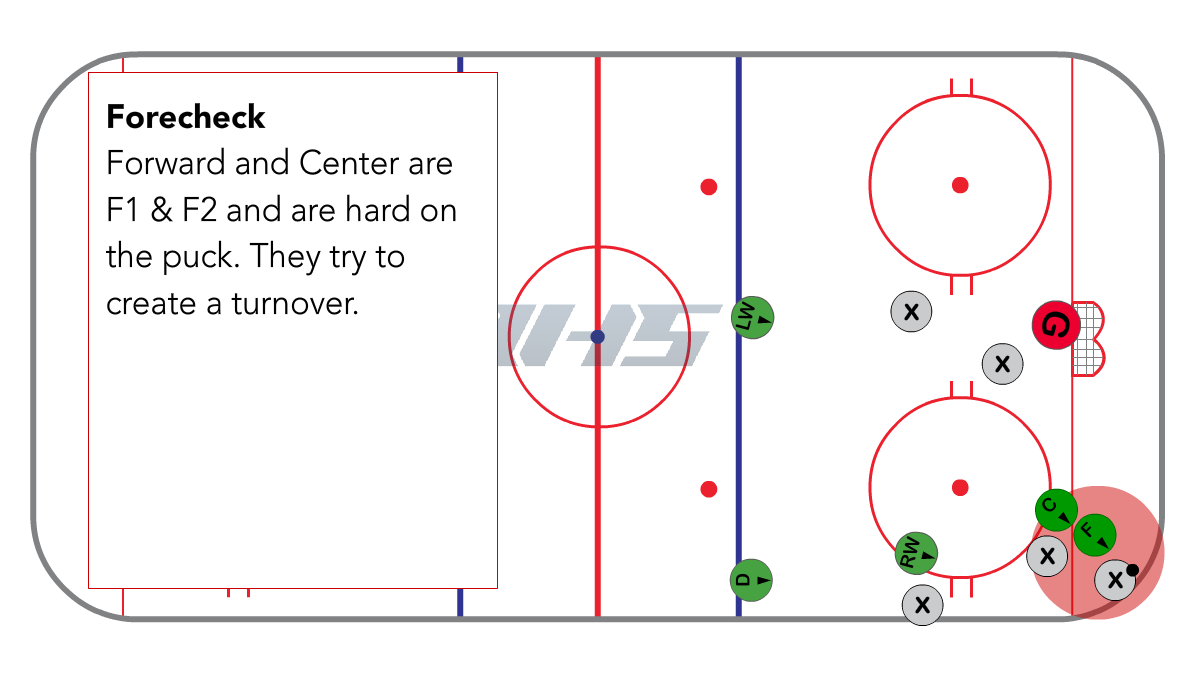 This is the most important position and requires smart and disciplined players. The rule of thumb is that you play low in the zone when the puck is on your side of the ice and when it is not you have to play the weak side defensive position. They need to be able to anticipate when the puck will change sides of the ice. 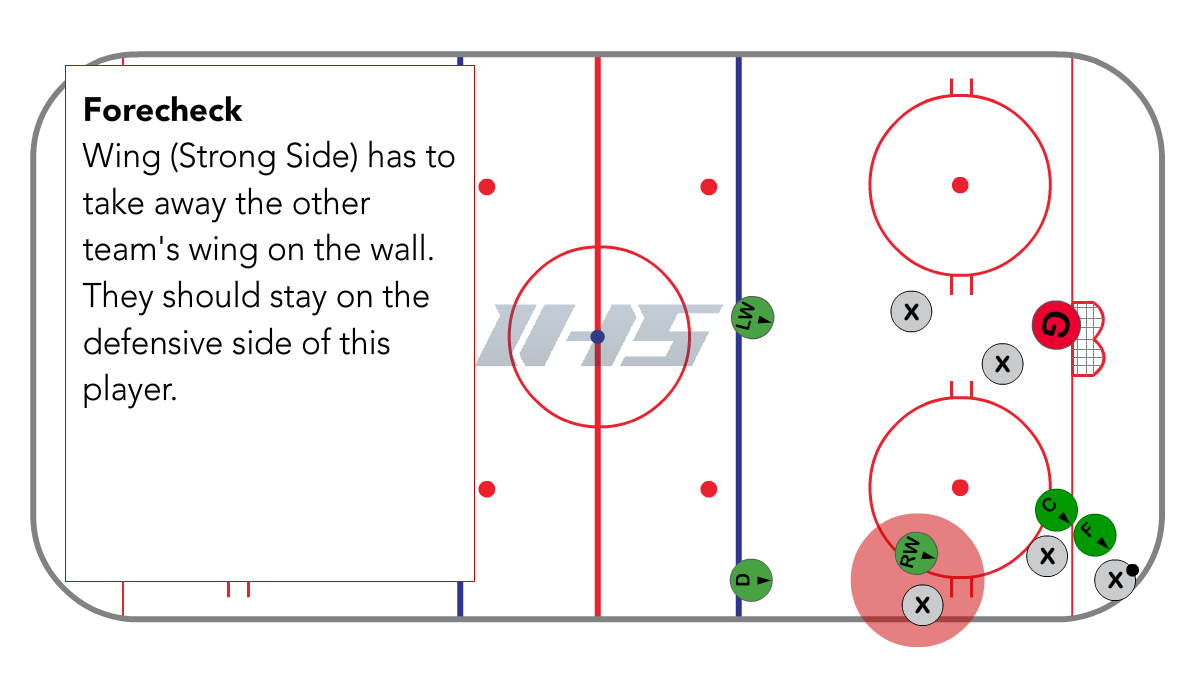 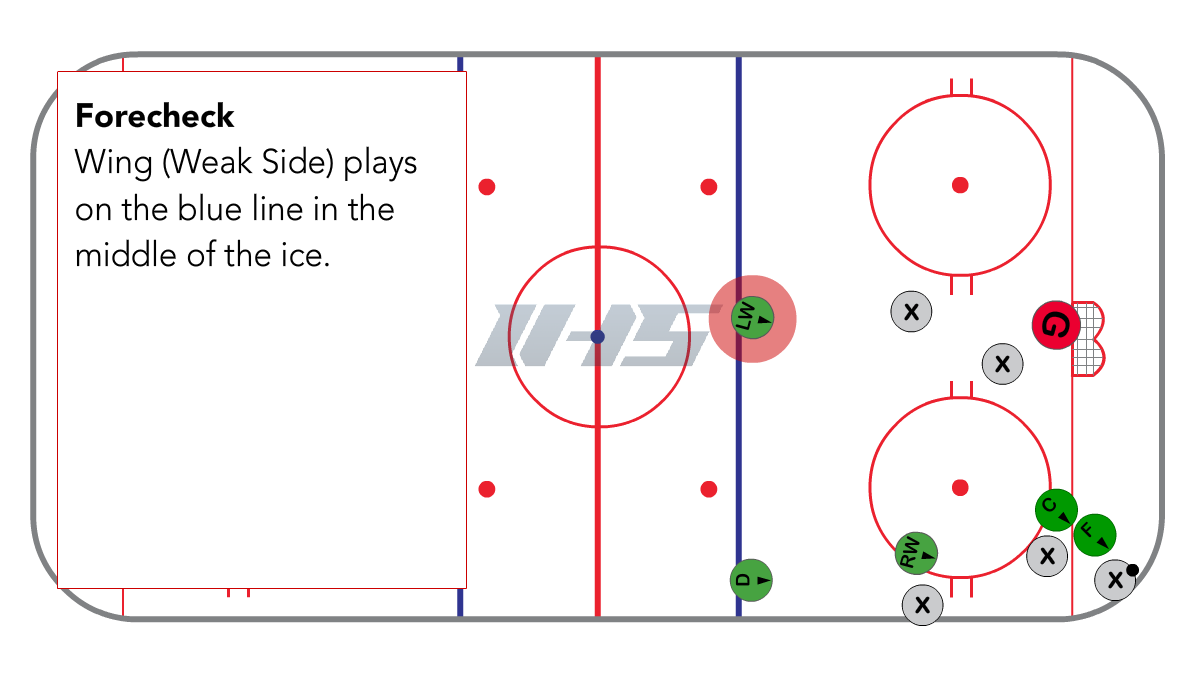 In the offensive zone the forward has to be relentless on loose pucks. They have the freedom to chase down all loose pucks and pressure the opponents all over the ice. Once possession is gained then they should provide the net front presence. If the puck is below the goal line they should pop out and be an option for a pass to the front of the net. If the puck is above the goal line they should be taking away the goalies eyes and being tough to play against in front of the opponent’s goalie. View the diagram above for the Center Mid.

Positions for the faceoffs needs to be decided upon before each game and consistent for every line otherwise you risk mass confusion when lining up. Depending on your personnel you will need to designate either the left wing or right wing to line up as a defender for the face-off. The forward will then line up in their position. For example, if you designate the right wing to line up as a defender then you will have the left wing line up as a typical left wing, the center mid will take the face off and the forward will line up where the right wing typically lines up. 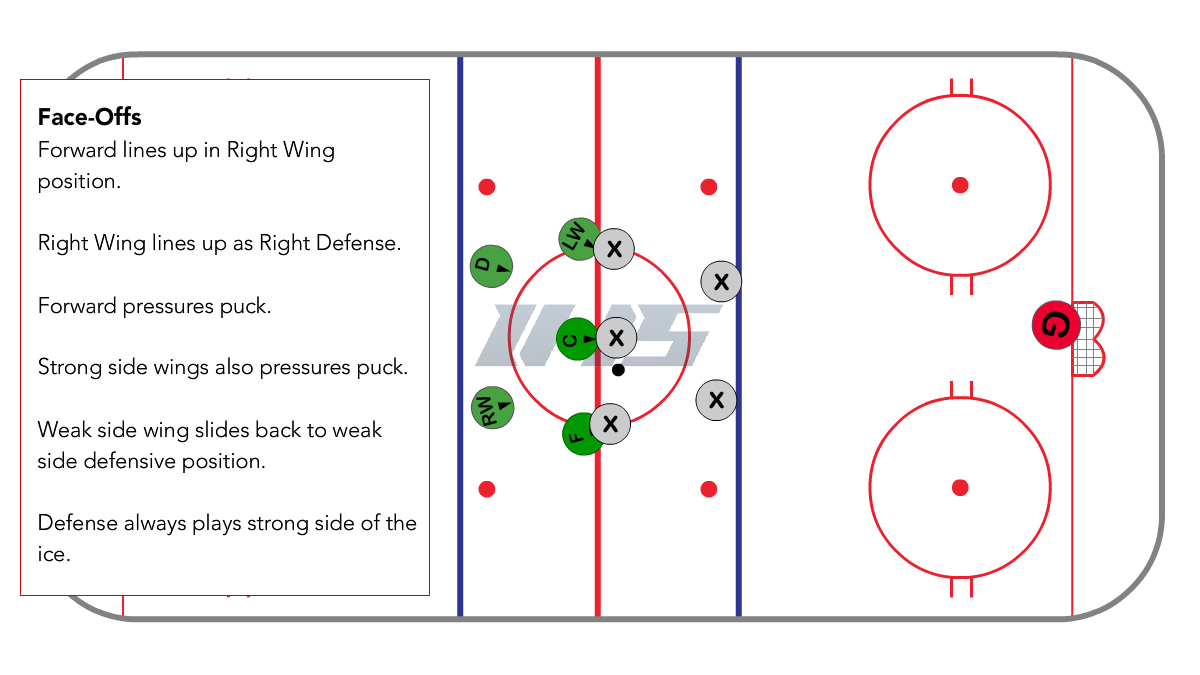 The neutral zone play without the puck follows the method below. In general the Forward is always pressuring the puck along with the strong side mid wing. The center is always either helping pressure the puck or supporting through the middle. The weak side mid wing will become the the weak side defense and slightly behind the defense while the defense is always on the defensive side on the same side of the ice as the puck.

The defenders need to be on the same side of the puck (strong side) and make sure everything is in front of them. They should use the dots as a guide and try to play along the dots unless they can get to a loose puck and help get possession.

The center needs to provide support and help the wings, forward, and defense outnumber the opponents around the puck. They have a lot of freedom to use their hockey sense and anticipate in the neutral zone.

The forward should always be on the offensive side of the puck and keeping the opponents honest. They can also work with the center mid, strong side wing, and defense to make sure they are outnumbering the other team around the puck. Make sure they are aware of off-sides!

There are two situations in which the defense needs to be able to execute when their team is retrieving the puck from their own zone. It is ideal for the defense to be assertive and be first to the puck. This way the two center wings can go to their respective corners for support. The defense can then use the net to their advantage and have two options for passing the puck. Encourage the defense to stop behind the net if they have time to bait the first forechecker before passing to one of the wingers.

The other situation occurs when a wing is closer to the puck and can retrieve it quicker. Now the defense will go to the corner to replace that wing’s position and provide support.  The winger should now use the net, stop behind it if possible, bait the first forechecker, and make a pass to the other winger or the defense.

The center wing’s responsibility is the same as the defense. If they are the closest player they should retrieve the puck and use the net to initiate the breakout. If they are not retrieving the puck they need to go almost all the way down to the goal line and provide support for the defense or other wing that has the puck.

The forward should stretch the full length of the ice using the same side of the ice that the first pass was made. They can be used as a last resort outlet where if a player feels like they have no play then they can throw the puck down the ice towards the forward. Most of the time the are really just a decoy and it will force the opponents to stay back and open up more ice for the other four players to operate. 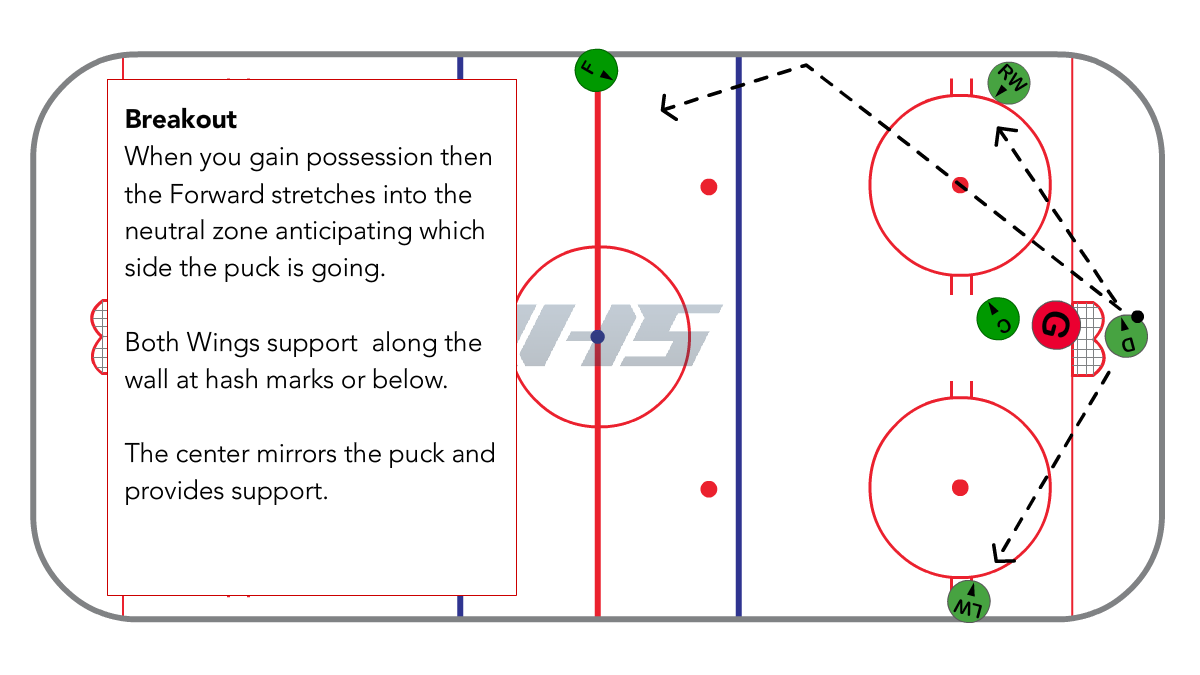 Please let us know by posting a comment below if you have tried this system. It would be great to know where your team succeeded and where it struggled.