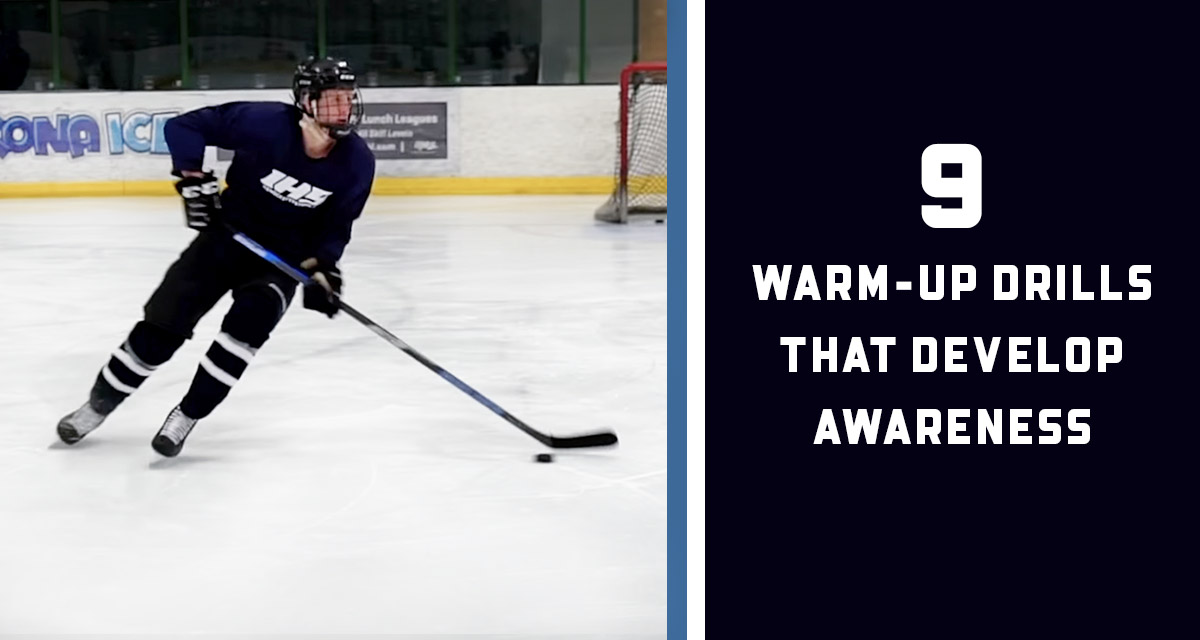 Start practice with drills that warm-up the body and mind!

In the article below, we give coaches 9 examples of warm-up drills that encourage players to keep their head up, and make decisions, which will help them develop their on-ice awareness.

General Warm-Up: It should be noted, it is always recommended that players engage in a general warm up before jumping right into any drill. The aim of a general warm-up is to get the blood flowing to all parts of the body, especially large muscle groups & joints after a day of school, or sitting in a bus or a car. A general off-ice warm up could include a jog, light skipping, riding an exercise bike, etc. A general on-ice warm up could include low intensity skating and stickhandling, etc. At the bottom of this article we give a warm-up example that coaches can use at their next practice that consists of a general on-ice warm-up that progresses into some of the warm-up drills that are shown below.

Coaching Tip: Helping players develop their on-ice awareness will look messy at first. It takes lots of patience and practice to develop awareness. However, if players learn how play hockey with their head up, it will make the game safer, and more fun, as they can easily spot open ice, their teammates, and the defenders. Incorporating drills like the ones listed below, along with small area games throughout the season will naturally help players learn how to play with their head up.

In the 9 drills below, play attention to the players in the videos. No matter their age or skill level, you will notice them looking up to spot open ice, their teammates, and the defenders. In some of the clips below we show examples of both NHL players and youth hockey players doing the same drill. This shows that working on awareness is important at all levels of the game. Ok, now let's get to the fun stuff.

1) Individual and Team Keep Away (with Multiple Pucks)

Individual & Team Keep Away (with Multiple Pucks) helps coaches jump-start practice with a puck protection warm-up that can engage the whole team at once. In the first part of the drill, players battle to protect a puck for as long as they can. After a rep or two of individual keep away, the coach can progress to team keep away, where players work together to keep the pucks from the other team. Both parts of the drill encourage players to be aware of the puck, open ice and other players. In the video above we show the Buffalo Sabres warming-up with this drill and we also show youth hockey players playing a variation called "Finders Keepers" that makes these warm-up drills a competitive game.

Rondo Circle Passing from Alyssa Gagliardi is a great activity that can be used as a passing warm-up, and as an activity to improve overall awareness. Rondos are popular activities in soccer, and are similar to keep away, where a group of players work to keep possession of the puck / ball. Players should cheer if their teammate makes a great pass!

3) Head Up Scan The Ice Warm-Up

Head Up Scan The Ice Warm-Up from Dwayne Blais is a simple yet effective warm-up drill that is great for all age levels. The goal of this warm-up activity is to get players in the habit of keeping their head up while they stickhandle so they can look for open ice and evade obstacles.

Triangle Tag is a simple and fun drill that helps players practice skating, edgework, puck control & on-ice awareness. Players need to look up to evade the taggers and also find players who are frozen and need to be untagged. Players can untag someone by stickhanding through their triangle (the space between the blade of their stick and their skates).

The Finnish 5 Puck Progression from Ben Eaves is a progressive warm-up drill that can be done with 3, 4 or 5 players at a time. The video above shows two groups going through the full progression. Group # 1 consists of 4 different U18 players and Group # 2 is made up of 5 different U10 & U12 players. The first 3 exercises in the Finnish 5 Puck help players warm-up their hands and edges. The remaining exercises in the progression require players to keep their heads up and communicate with each other to complete successful passes.

Gates of Buffalo Passing Drill helps players practice moving to open space, while they communicate verbally and non-verbally with teammates, so they can score points by passing through Gates (can not pass through the same gate twice in a row).

7) King or Queen of The Hill / Knockout

King or Queen of The Hill is also commonly called Knockout. Every player starts with a puck and the goal of the game is to keep control of your puck while you knock other players pucks out of the designated boundary. Last player with a puck wins! In the video above, we show NHL players all the way to Mites playing this game.

Chase The Rabbit is a puck handling & skating warm-up that helps to develop on-ice awareness. The Red Player # 1 (in the diagram above) is The Rabbit. The player with the puck (Blue Player # 2 in the diagram) is The Chaser. On the whistle, The Chaser tries to follow The Rabbit as close as possible. The Rabbit should make it challenging to follow! Allow the players to go for 30 seconds, blow the whistle, then have players switch roles. It is critical that all players on the ice keep their heads up so they do not run into other players.

Keep Away from The Battery Hockey Academy is a simple but highly effective game to help players develop their on-ice awareness. The ever changing game requires players to keep their head up to see where their teammates are, the defender is and where there is open ice.

Below we will give an example of how a hockey coach can start practice. The idea behind this warm-up progression is to use activities that require players to make their own decisions. We start simple and gradually add complexity and intensity. You can choose from the activities listed above this blog post to build your own warm up progression that will get the heart, mind, and body ready for practice. Learn below:

You can use one of the zones from the blue line down. All the players are involved so there is no waiting in lines. Between each rep give the players about a 30 second rest.

This is a competitive activity where the goal is to have a puck on your stick at the end of 30 the 30 second shift. Players start on outside the zone and you shoot half as many pucks into the zone as there are players. The players compete for pucks for 30 seconds. If they have a puck they skate to open ice and try to protect it. If they don’t have a puck they need to hunt pucks to try and steal one. At the end of the 30 seconds players without a puck do 10 push ups. Watch a view a video of Finders Keepers.

After that progression, the players heart, mind, and body are ready for practice, all while they worked on developing on-ice awareness!

Developing awareness takes time and lots of practice. Dynamic drills like the 9 listed above, along with small area games, help players start to develop awareness since the drill is ever changing and players need to keep their head up to be successful.

As a coach, it is important to encourage players to scan the ice and keep their head up in practice. If practiced and reinforced enough, it will become second nature to the players which will make the game safer and more fun as they can easily spot open space on the ice, their teammates, and the defenders.