This is a breakdown about passing and moving to open space, which is commonly known as the Give and Go or Pass and Drive. 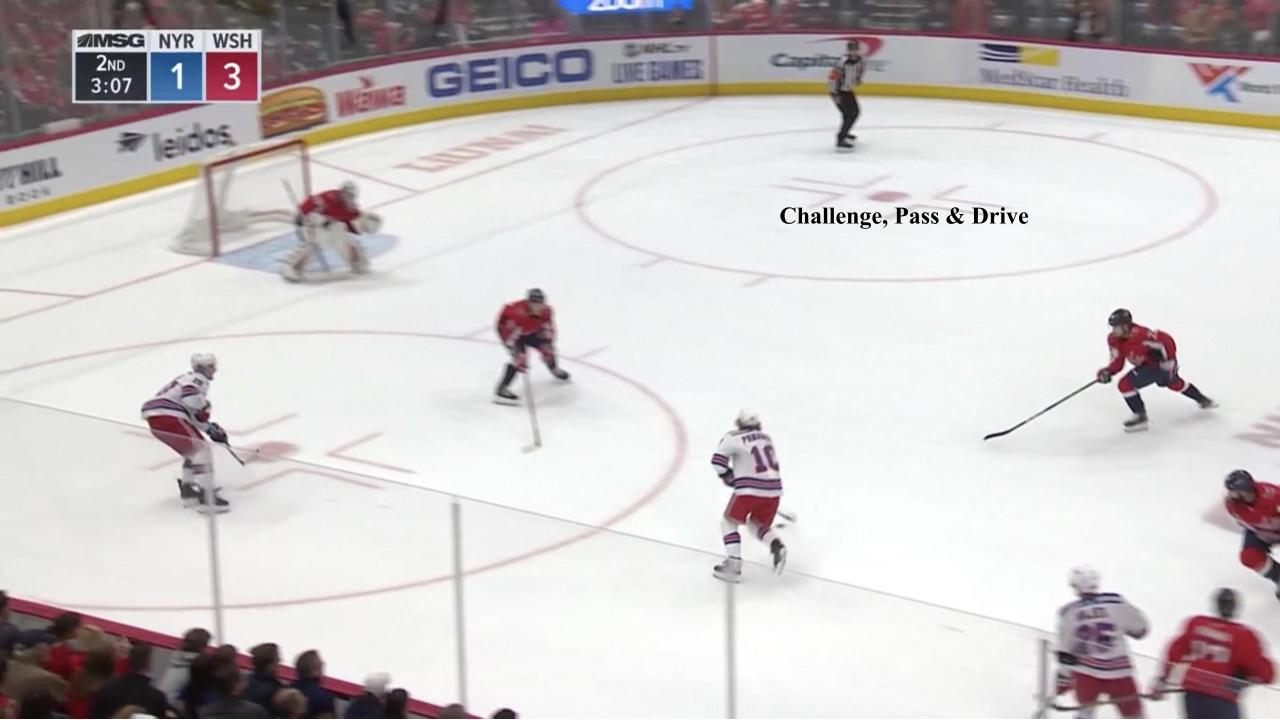 In this image, Panarin starts to challenge the defender. Soon after he will pass & drive to the net. His head is up so he can see his teammate and where the open space is. 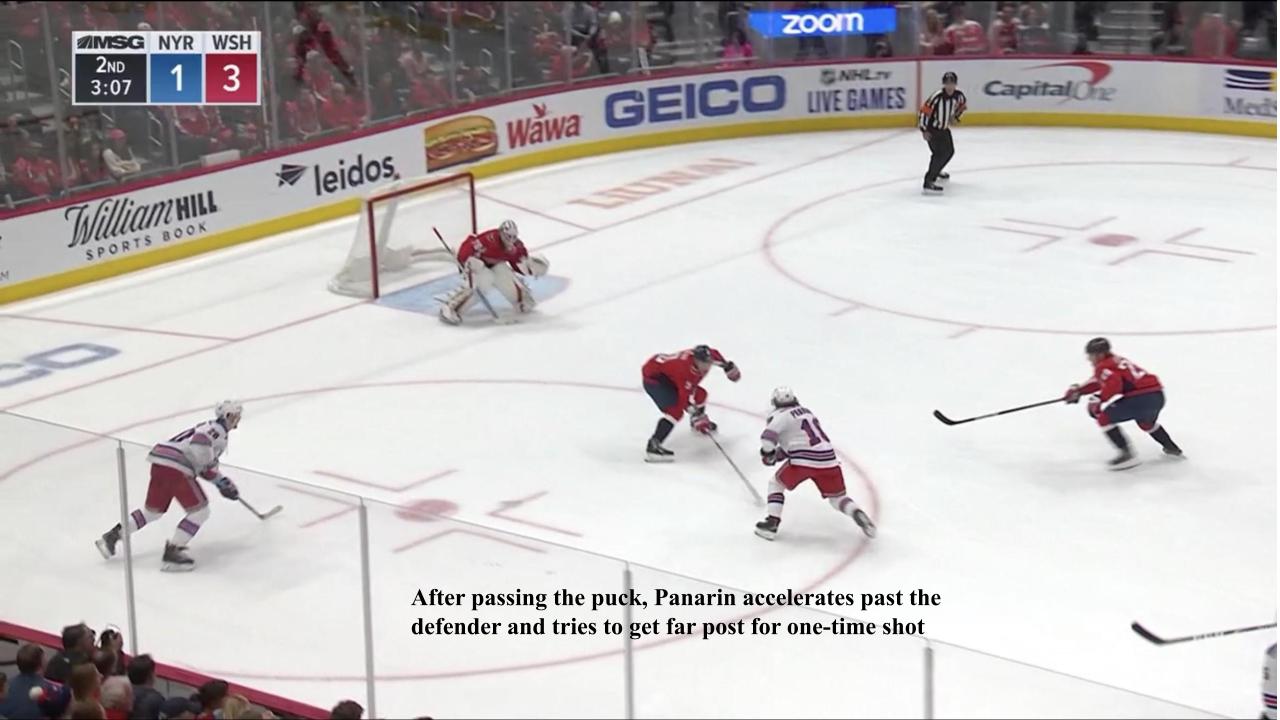 After passing the puck, Panarin accelerates past the defender and tries to get far post for one-time shot. 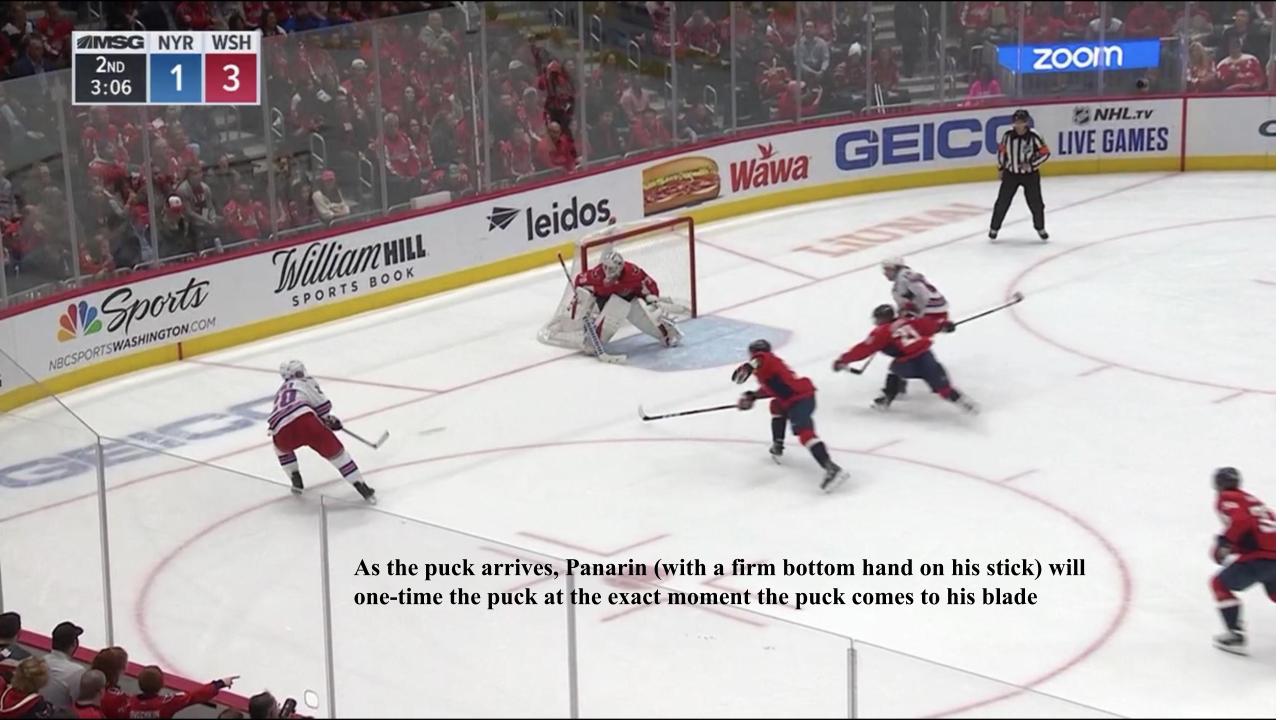 As the puck arrives, Panarin (with a firm bottom hand on his stick) will one-time the puck at the exact moment the puck comes to his blade.

Panarin drives the net and is able to one time a pass into the net! 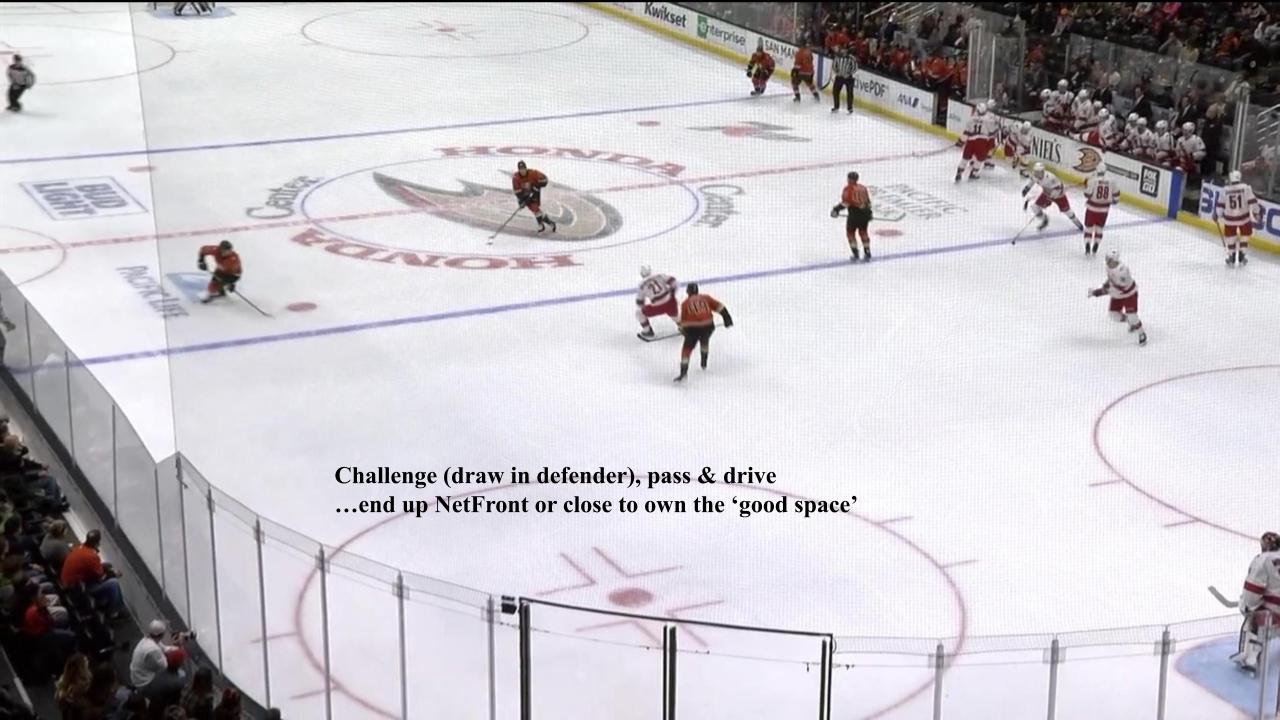 In these clips, Troy Terry challenge's to draw in the defender, then passes and drives to the net. He ends up in front of the net to to own the ‘good space.’ 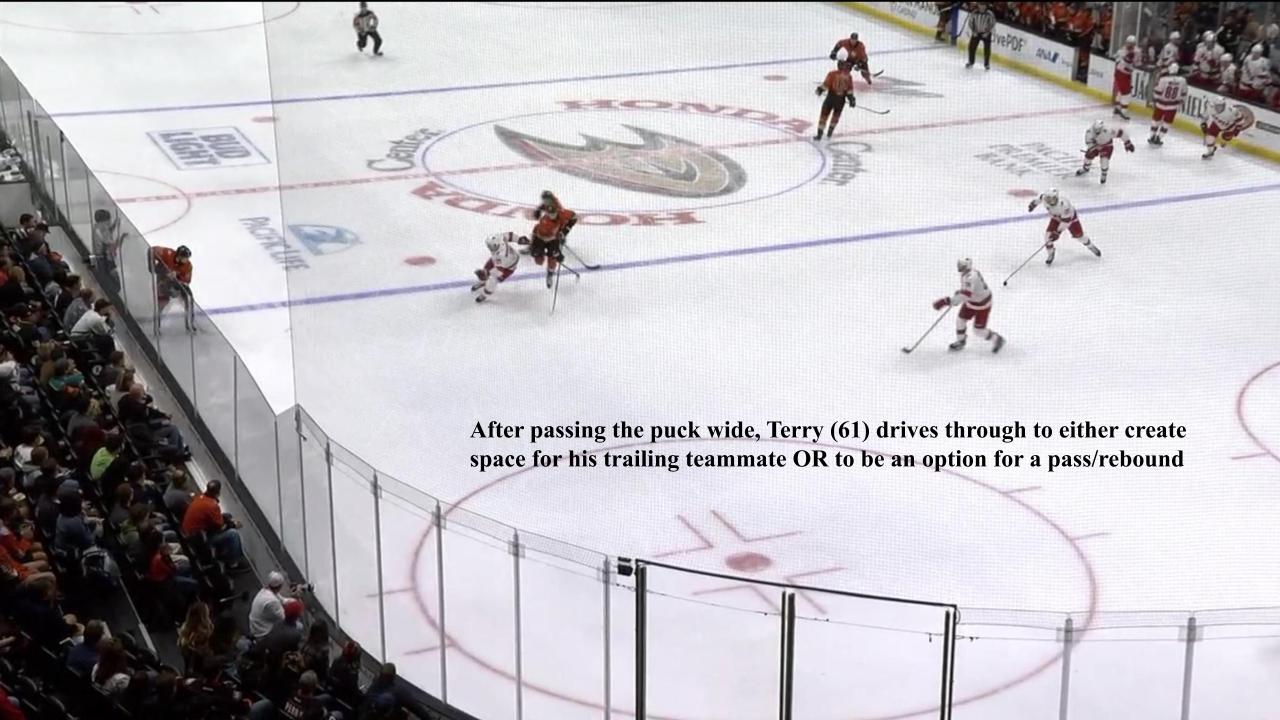 After passing the puck wide, Terry (61) drives through to either create space for his trailing teammate OR to be an option for a pass/rebound. 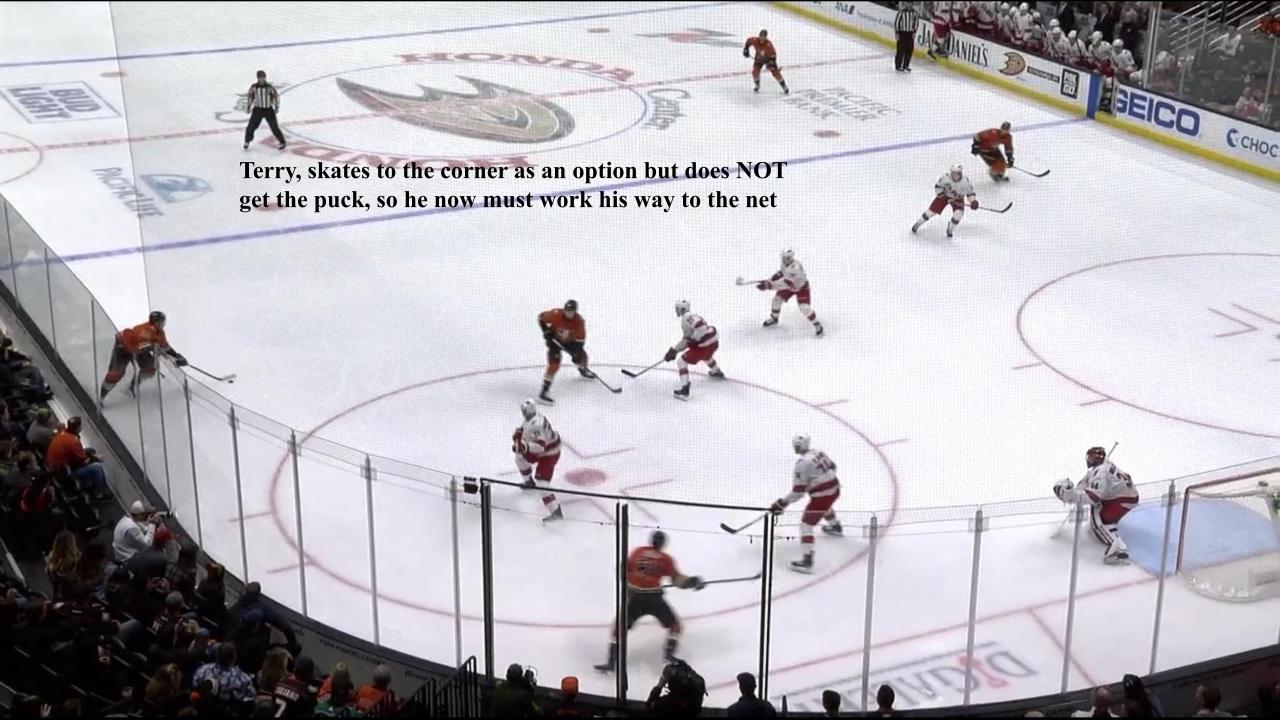 Terry, skates to the corner as an option but does NOT get the puck, so he now must work his way to the net. 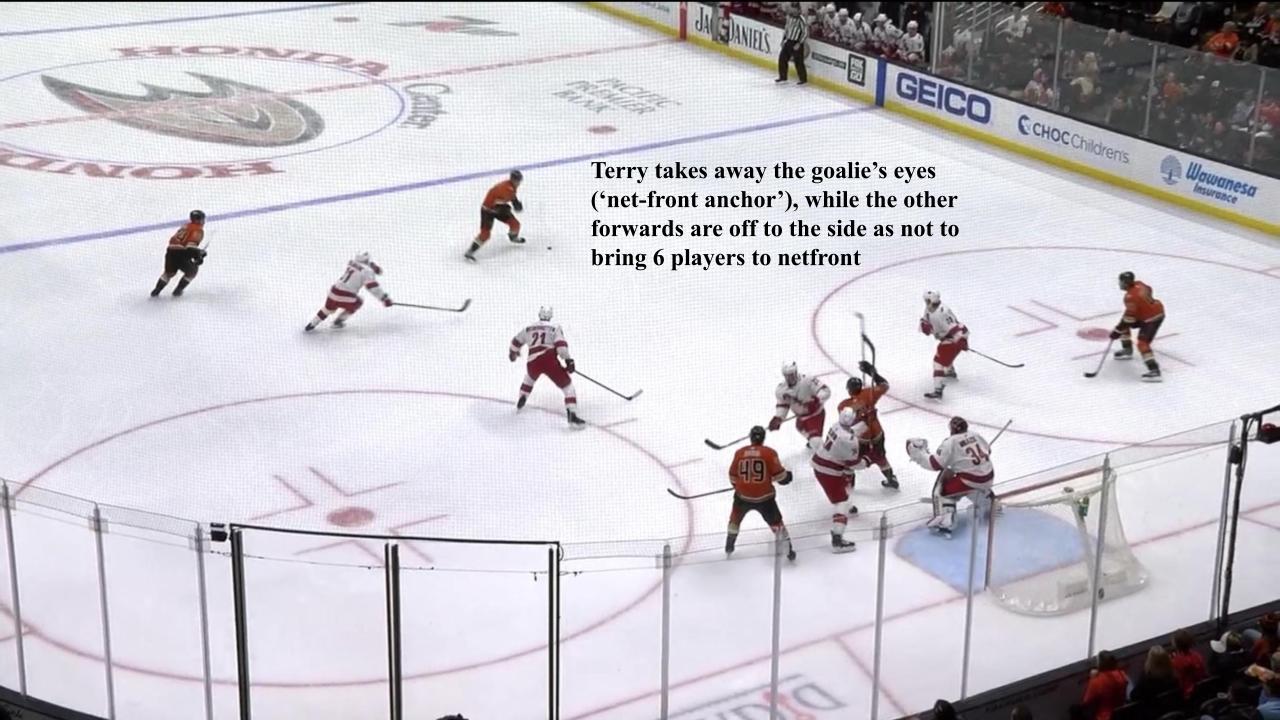 Terry takes away the goalie’s eyes (‘net-front anchor’), while the other forwards are off to the side as not to bring 6 players to netfront. 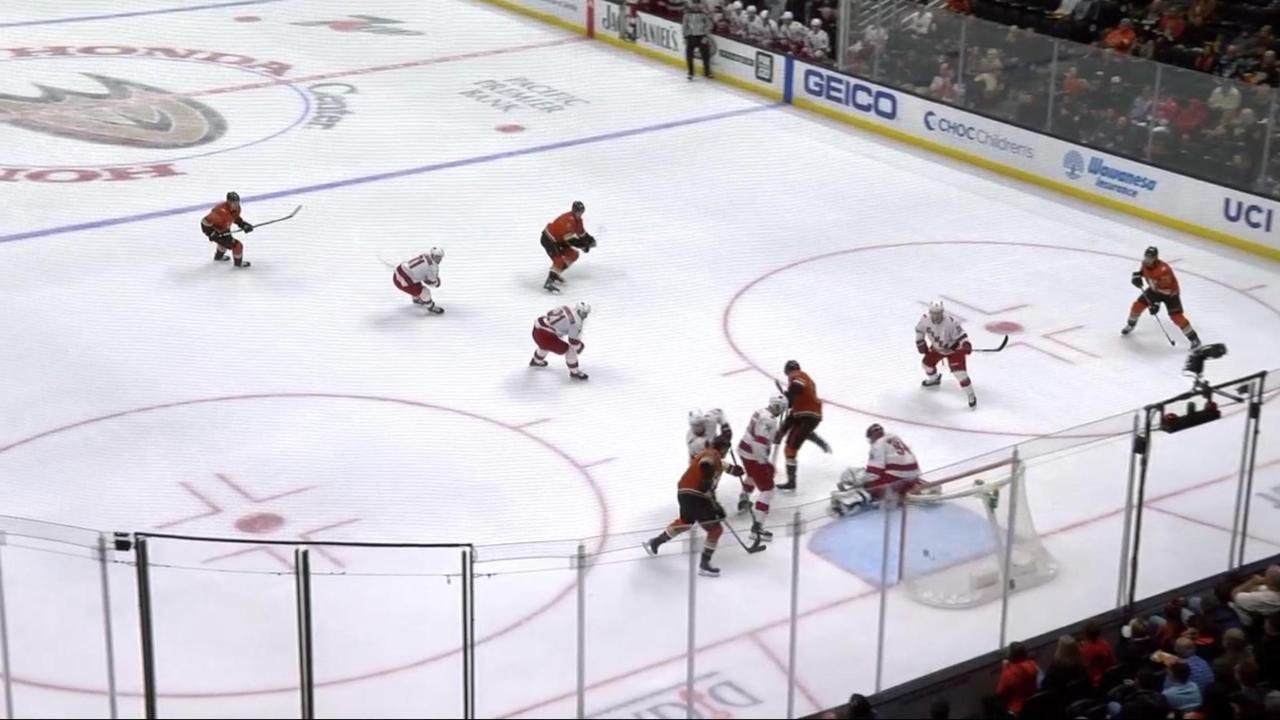 Troy Terry is able to tip the puck in for a goal! 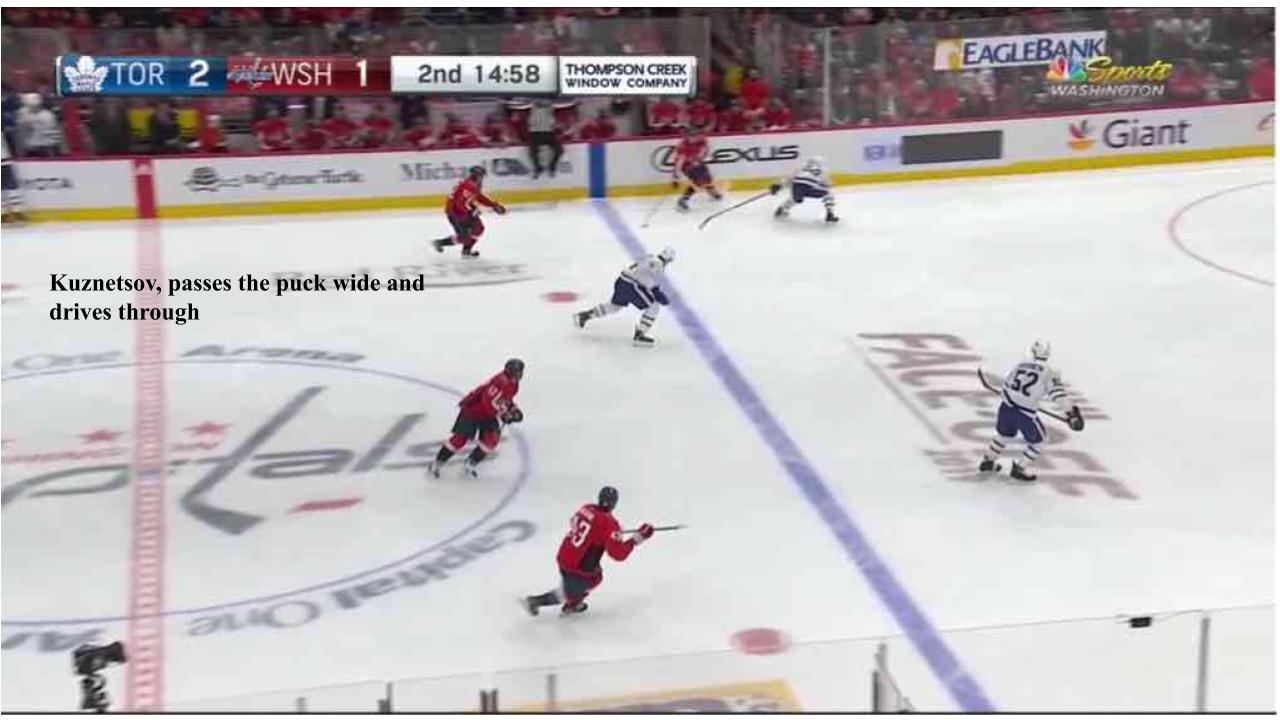 Kuznetsov, passes the puck wide and drives through the neutral zone at full speed. 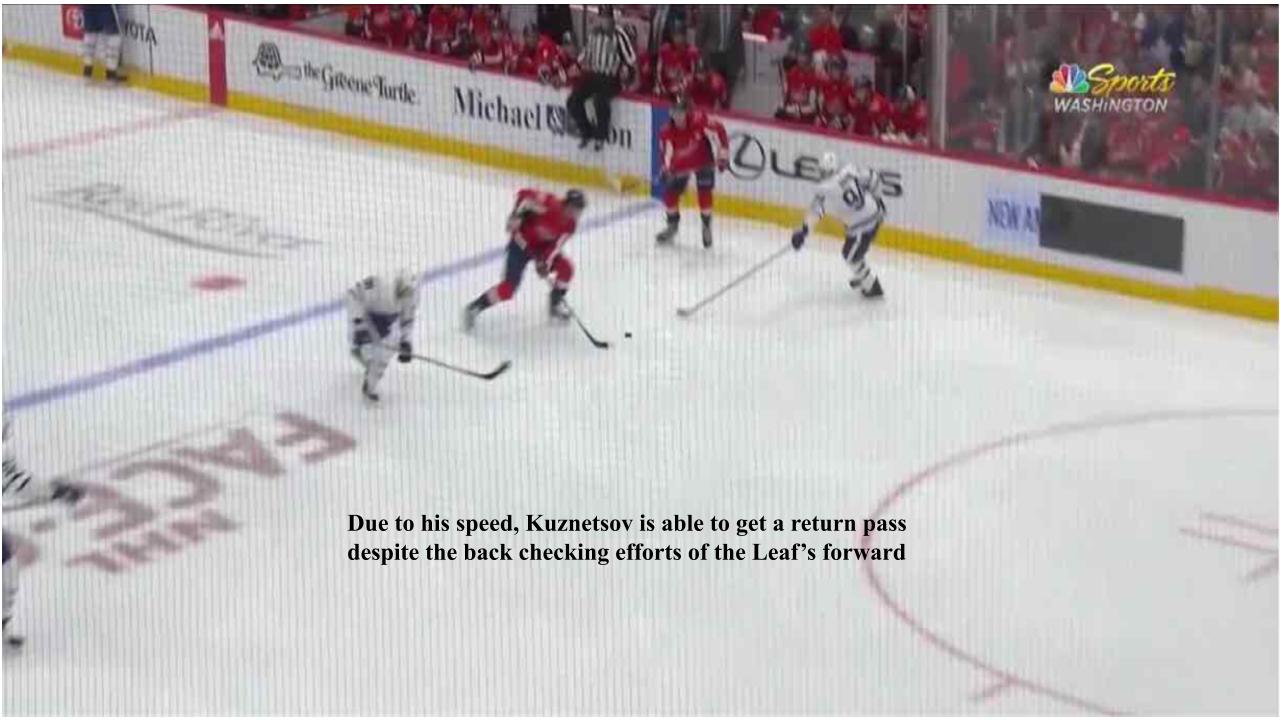 Due to his speed, Kuznetsov is able to get a return pass despite the back checking efforts of the Leaf’s forward. 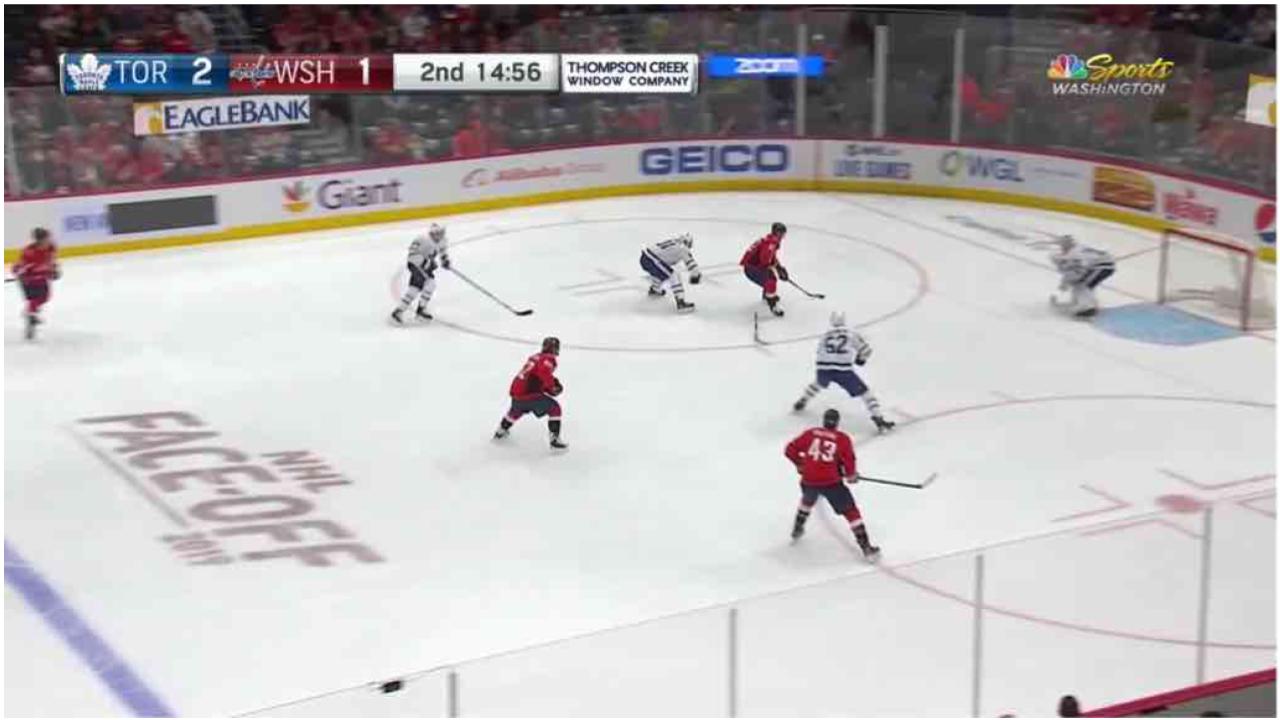 With his speed, he is able to blast by the Leafs defenders. 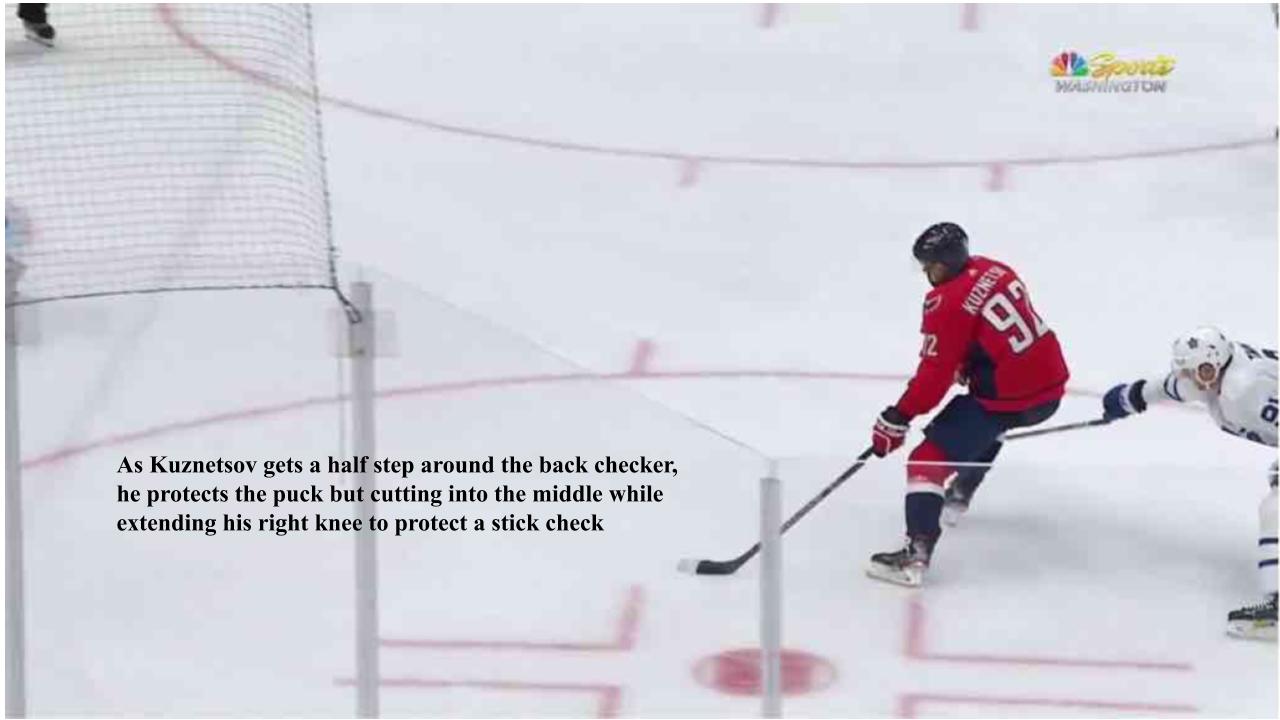 As Kuznetsov gets a half step around the back checker, he protects the puck but cutting into the middle while extending his right knee to protect a stick check. 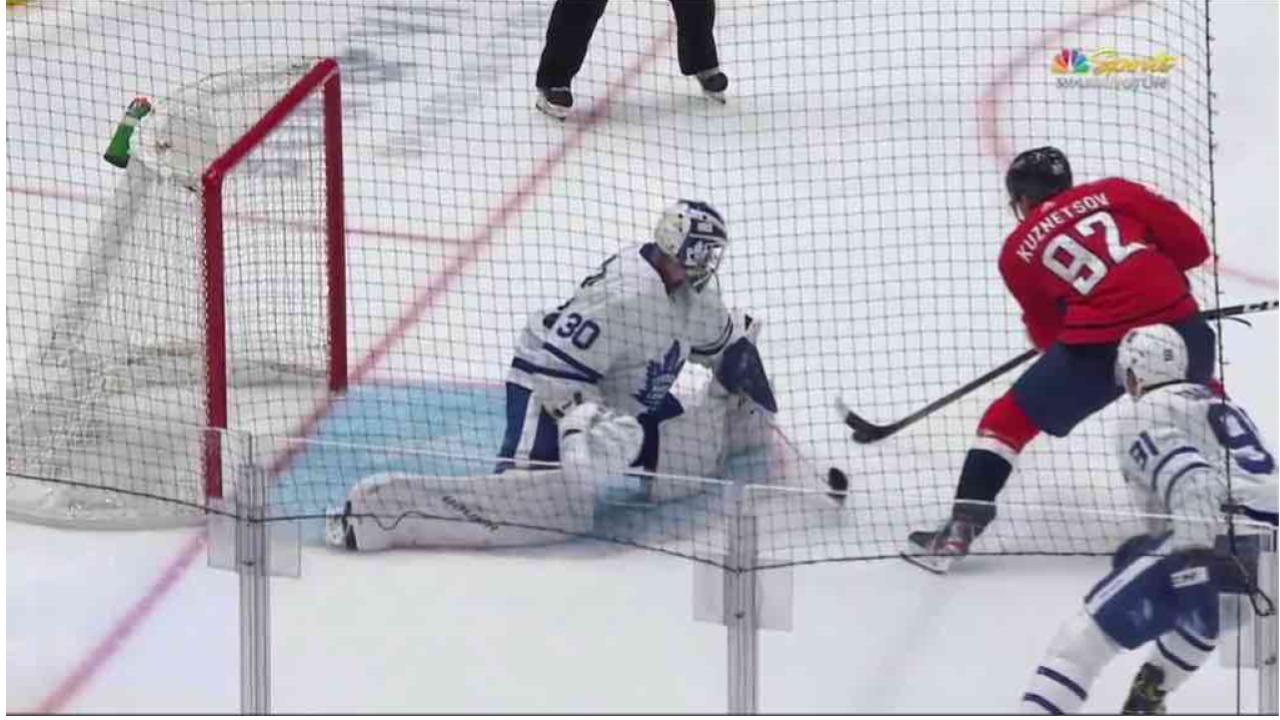 Kuznetsov scores after the give and go pass and driving to the net with speed.

shooting off the pass - Corners

Here is a simple drill to practice give and go's from the corner. Players jump to space, receive a pass and take a quick shot on net.

Shooting off the pass - point

Here is a simple drill to practice give and go's from the point. Players jump to space, receive a pass and take a quick shot on net.

The Swedish 2 vs 1 is an excellent small area game that encourages 2 players to work together to complete 4 passes in a row against one defender. The 2 offensive players must work on keeping their head up, protecting the puck and jumping to space to make it harder for the defence to steal the puck. This 2 vs 1 setup can be created in all spaces and areas in the ice.

The emphasis of this hockey drill for forwards is moving without the puck.

On the whistle the player with the puck has to pass to another forward and then move to the cone that is not occupied. After five consecutive passes the forwards can take a shot on net.  The defender must try to intercept a pass.  If the defender disrupts the play, the coach gives one of the forwards a new puck and the play continues.