In this skill breakdown, we dive into concepts that players should keep in mind when they are 1 v 1 and going for a 50/50 puck along the boards. 50/50 simply means that it is an even race to get to the puck. This skill is becoming more and more important as teams are utilizing "soft dumps" in the offensive zone to keep possession of the puck.

Note: If you are well in front of a player and it is not a 50/50 battle to get the puck along the boards, you should check out our "Puck Retrieval Tips" video. 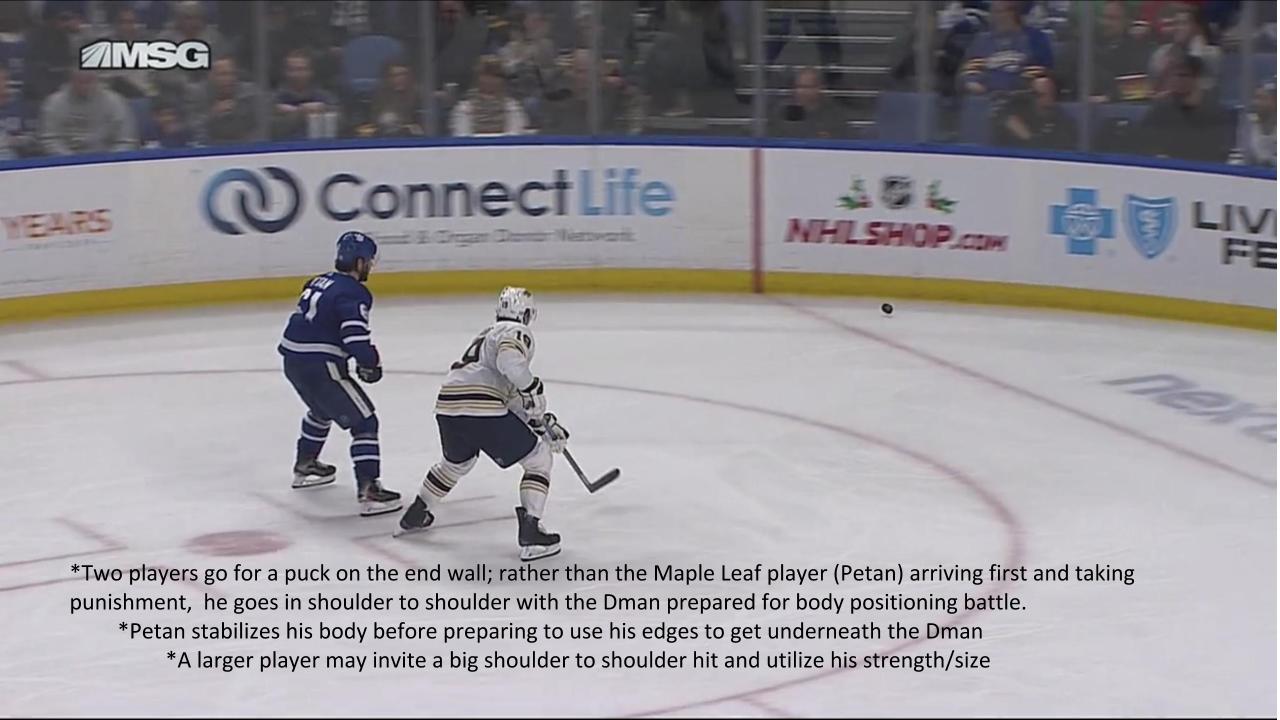 Two players go for a puck on the end wall; rather than the Maple Leaf player (Petan) arriving first and taking punishment, he goes in shoulder to shoulder with the Dman prepared for body positioning battle. 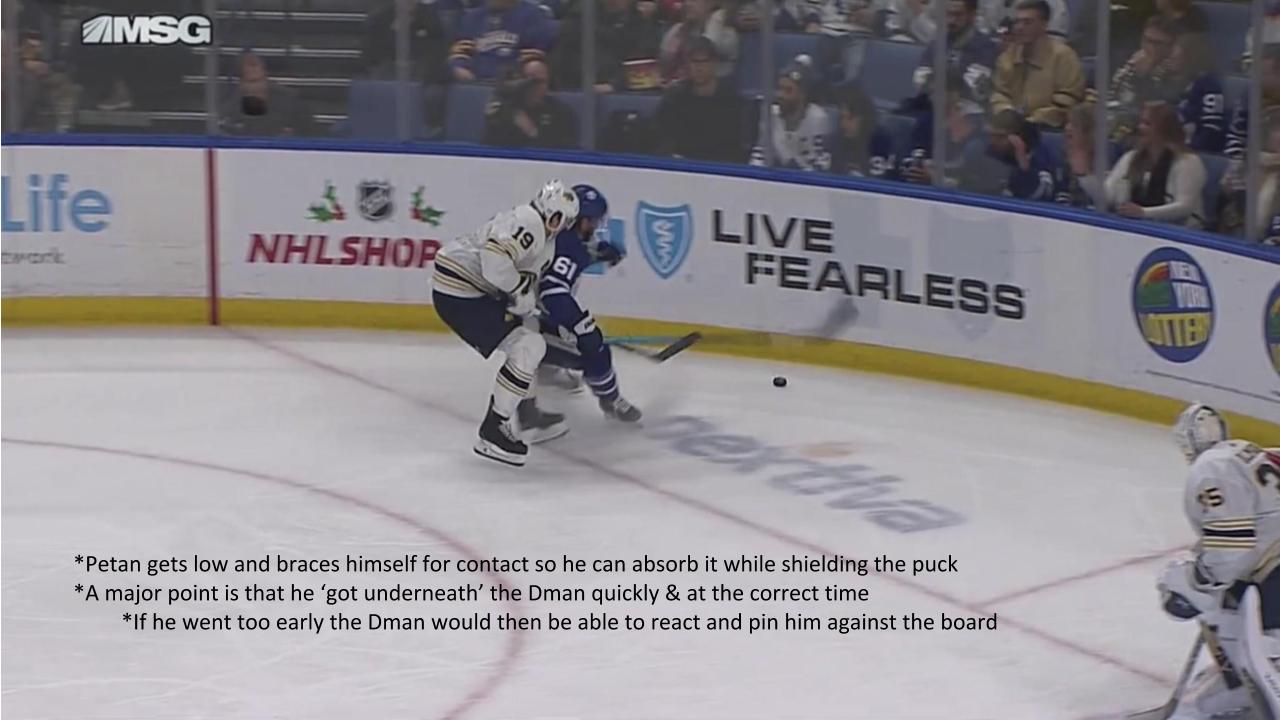 Petan gets low and braces himself for contact so he can absorb it while shielding the puck. 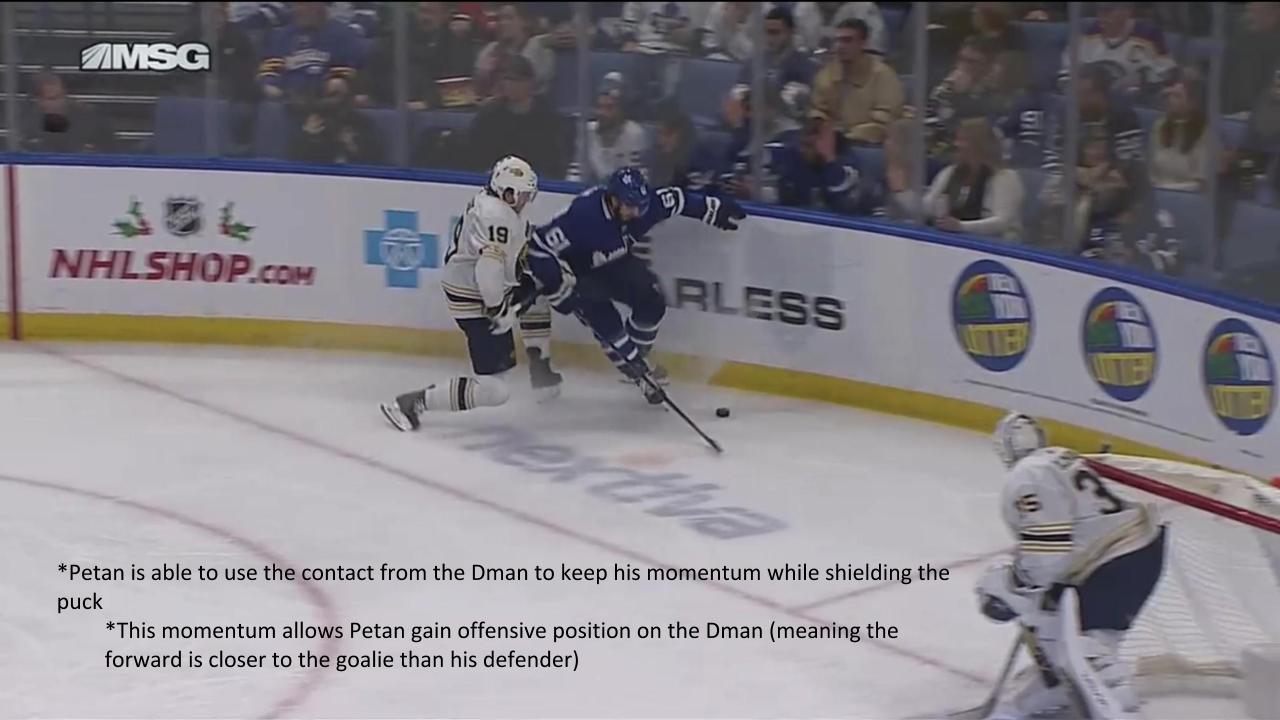 Petan is able to use the contact from the Dman to keep his momentum while shielding the puck. 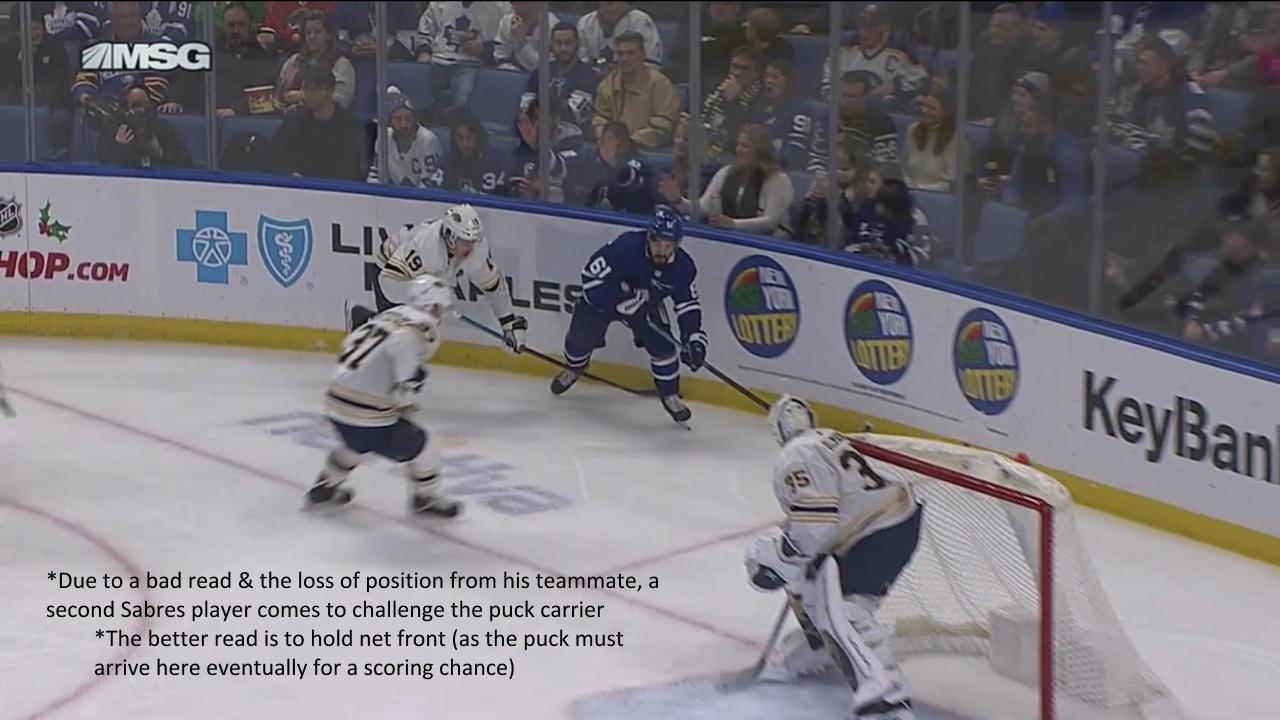 Due to a bad read & the loss of position from his teammate, a second Sabres player comes to challenge the puck carrier. The better read is to hold net front (as the puck must arrive here eventually for a scoring chance). 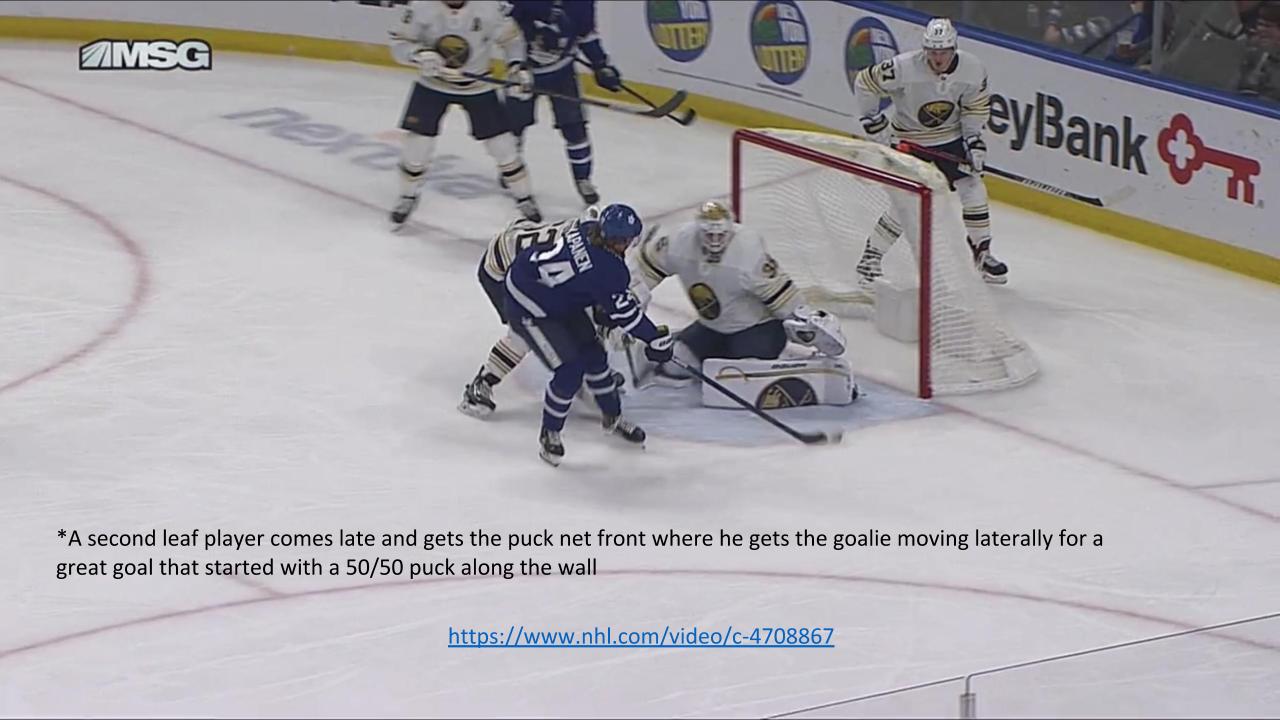 A second leaf player comes late and gets the puck net front where he gets the goalie moving laterally for a great goal that started with a 50/50 puck along the wall. 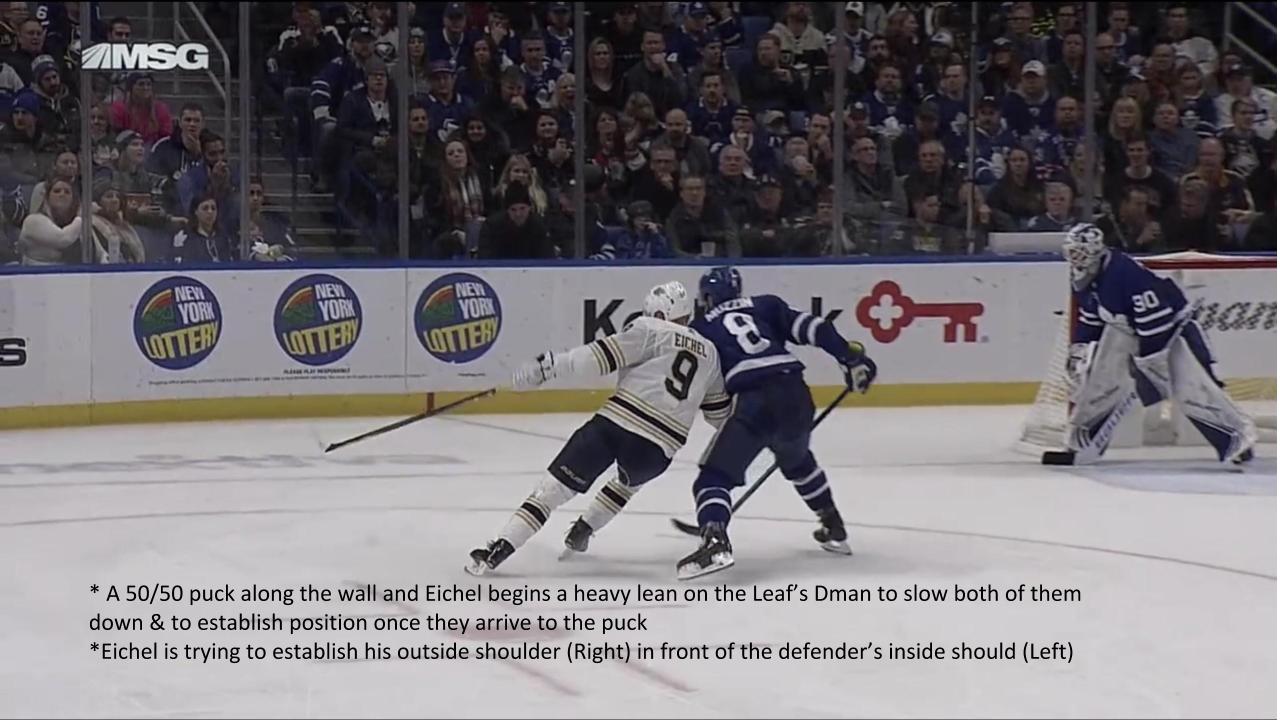 A 50/50 puck along the wall and Eichel begins a heavy lean on the Leaf’s Dman to slow both of them down & to establish position once they arrive to the puck. 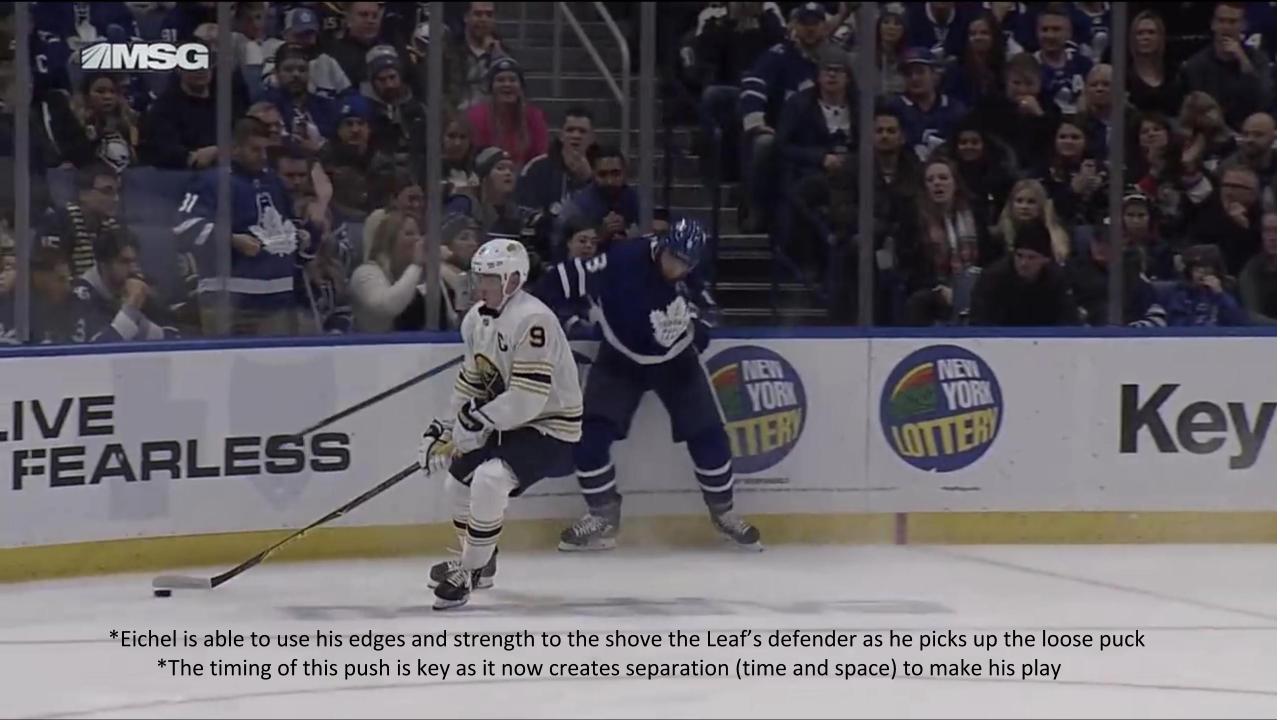 Eichel is able to use his edges and strength to the shove the Leaf’s defender as he picks up the loose puck.

The timing of this push is key as it now creates separation (time and space) to make his play. 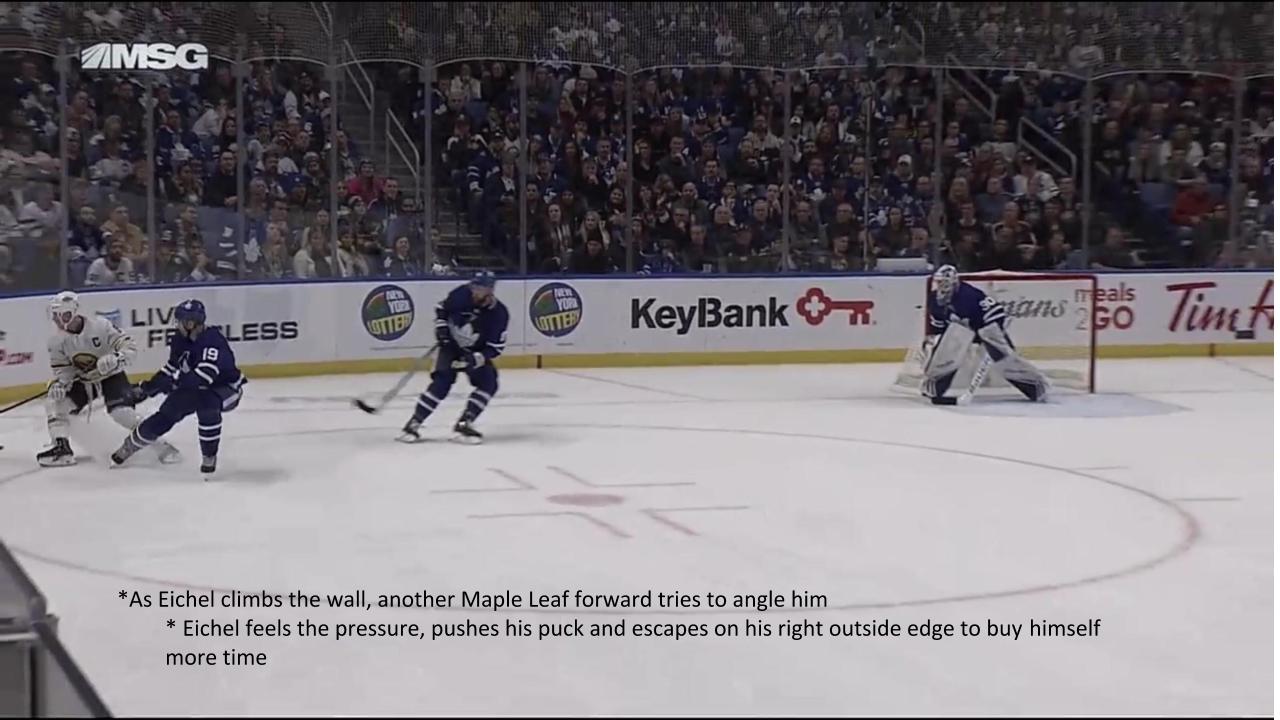 As Eichel climbs the wall, another Maple Leaf forward tries to angle him.

Eichel feels the pressure, pushes his puck and escapes on his right outside edge to buy himself more time. 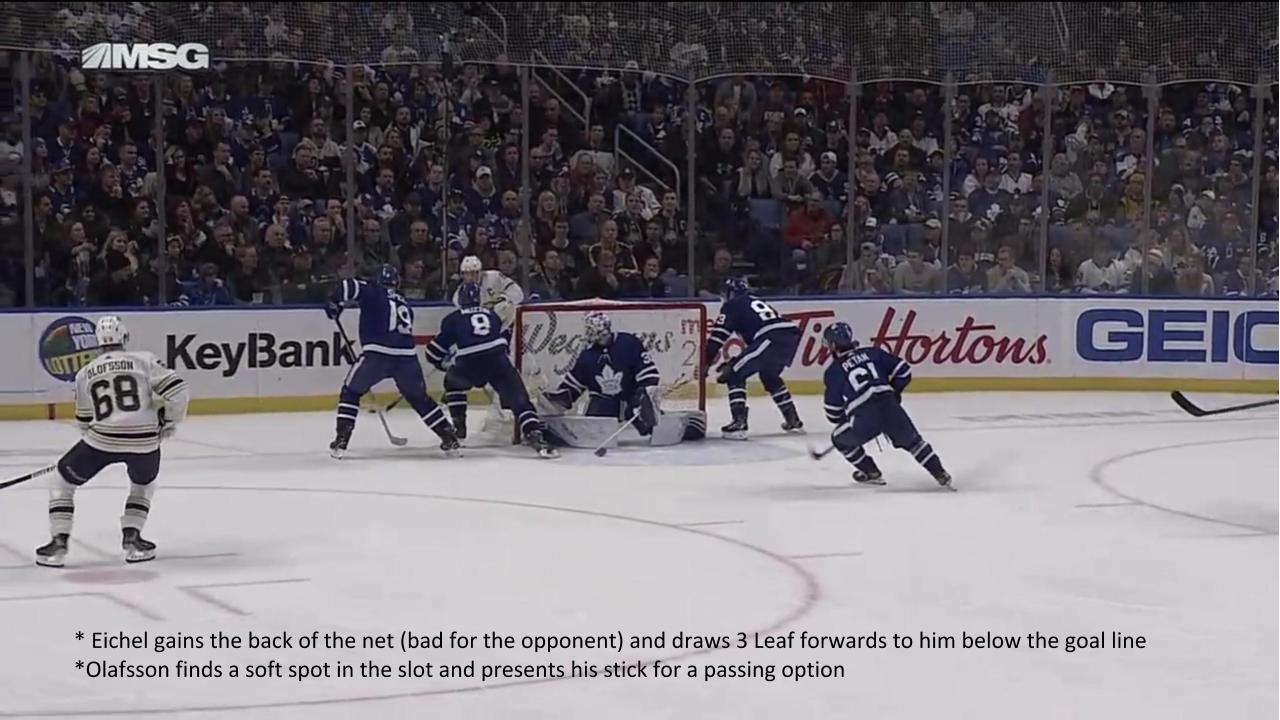 Eichel gains the back of the net (bad for the opponent) and draws 3 Leaf forwards to him below the goal line.

Olafsson finds a soft spot in the slot and presents his stick for a passing option. 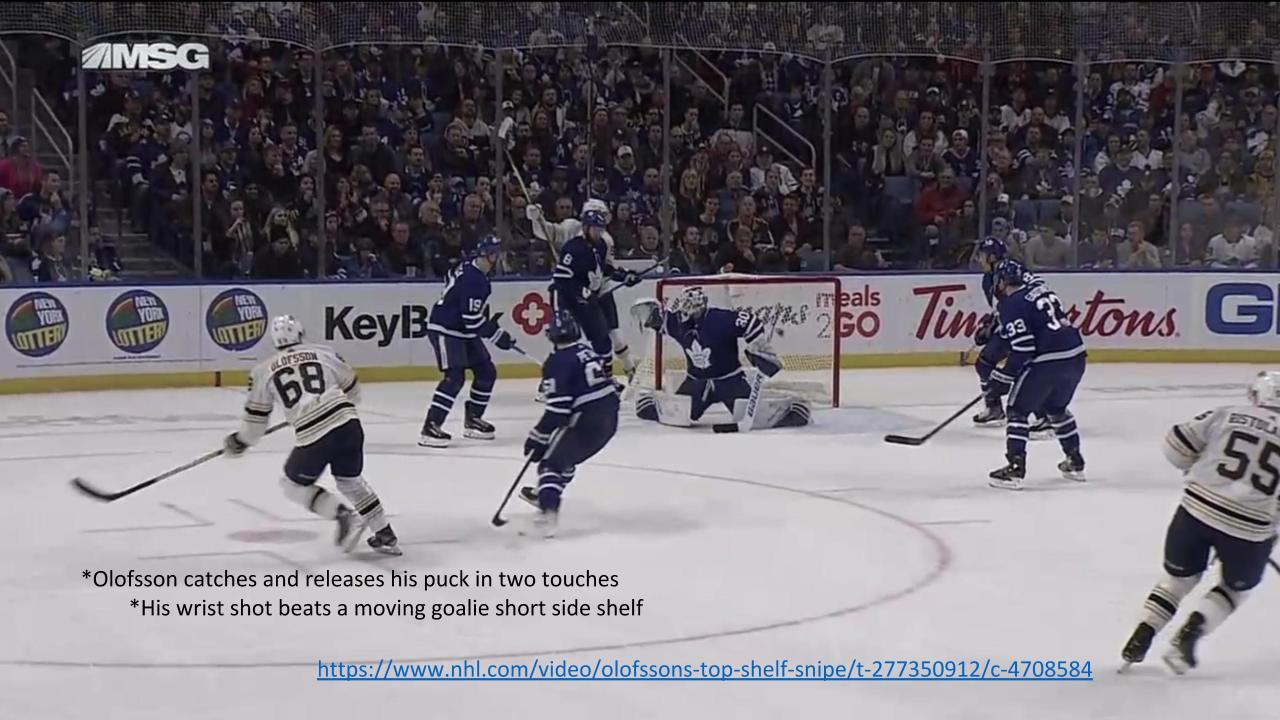 Olofsson catches and releases his puck in two touches. His wrist shot beats a moving goalie short side shelf.

Here is a similar battle drill to the one shown above, except each player has their own point to pass to. The two players battle for a loose rebound and work to get the puck to their teammate. Once they get the puck to the point, it begins a 2 on 1.

You can also modify this drill by dumping the puck into the corner so the players arrive in the corner at the same time and can practice the skill described above.