Inside / Outside With Change of Pace

This breakdown is about the inside to outside move with changing pace. We breakdown two goals, one from Connor McDavid and another from David Pastrnak. 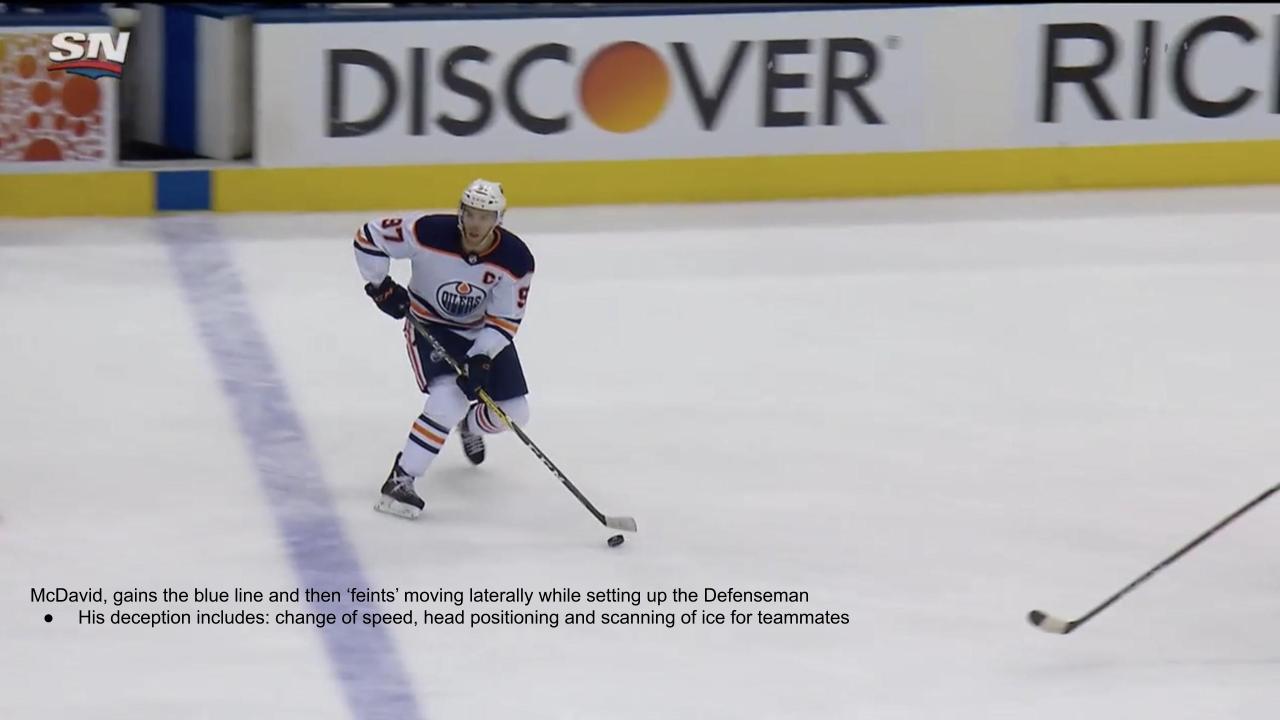 McDavid, gains the blue line and then ‘feints’ moving laterally while setting up the Defenseman.

His deception includes: change of speed, head positioning and scanning of ice for teammates 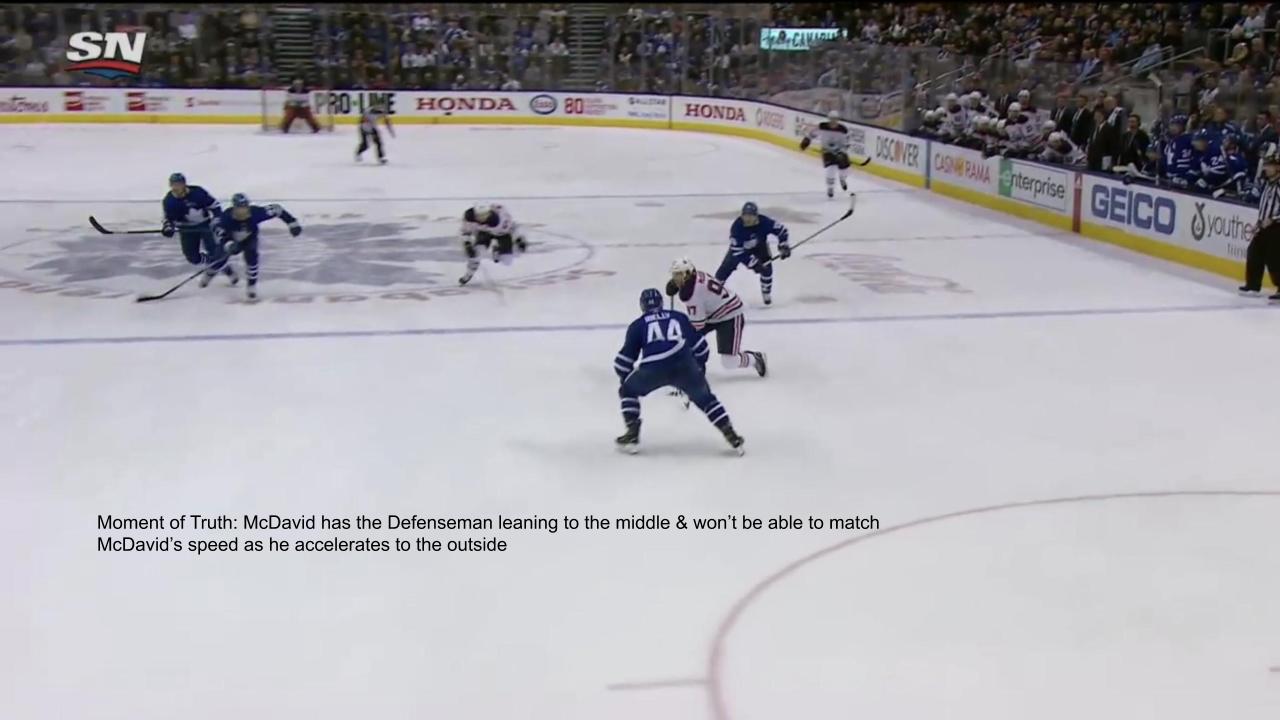 Moment of Truth: McDavid has the Defenseman leaning to the middle & won’t be able to match McDavid’s speed as he accelerates to the outside. 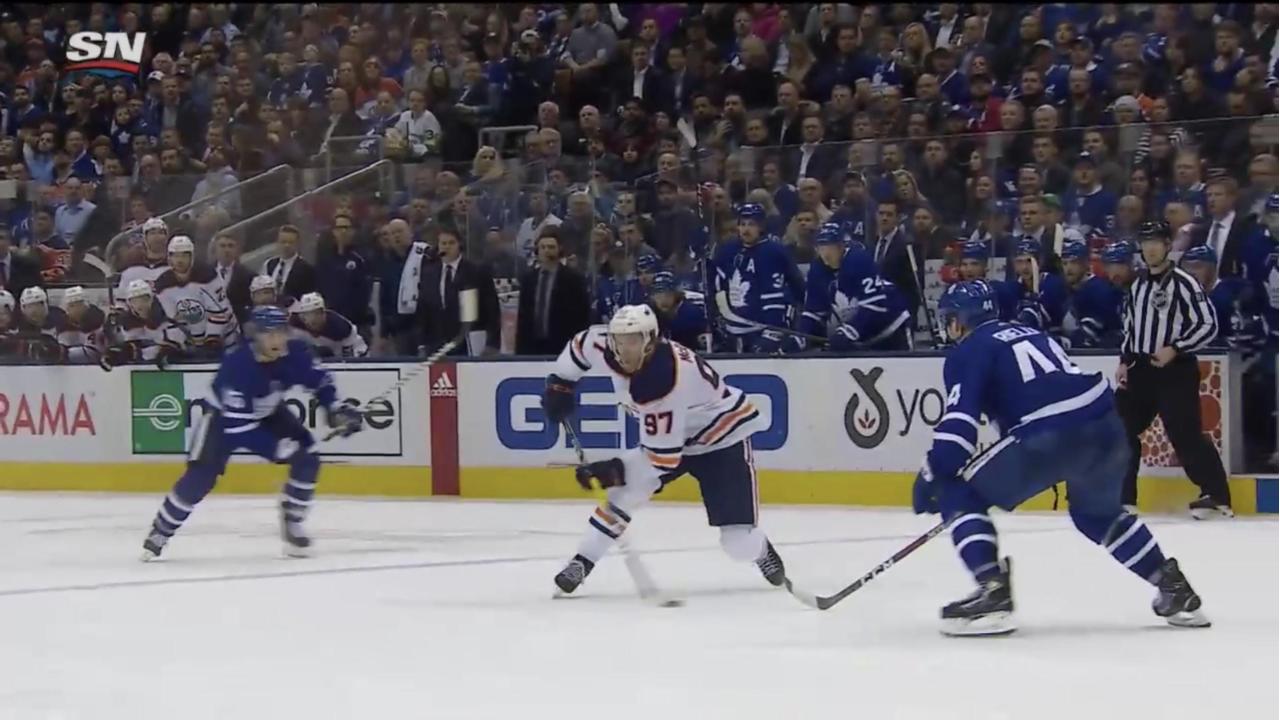 Here is a second angle of the "Moment of Truth." This is right where McDavid explodes to the outside. 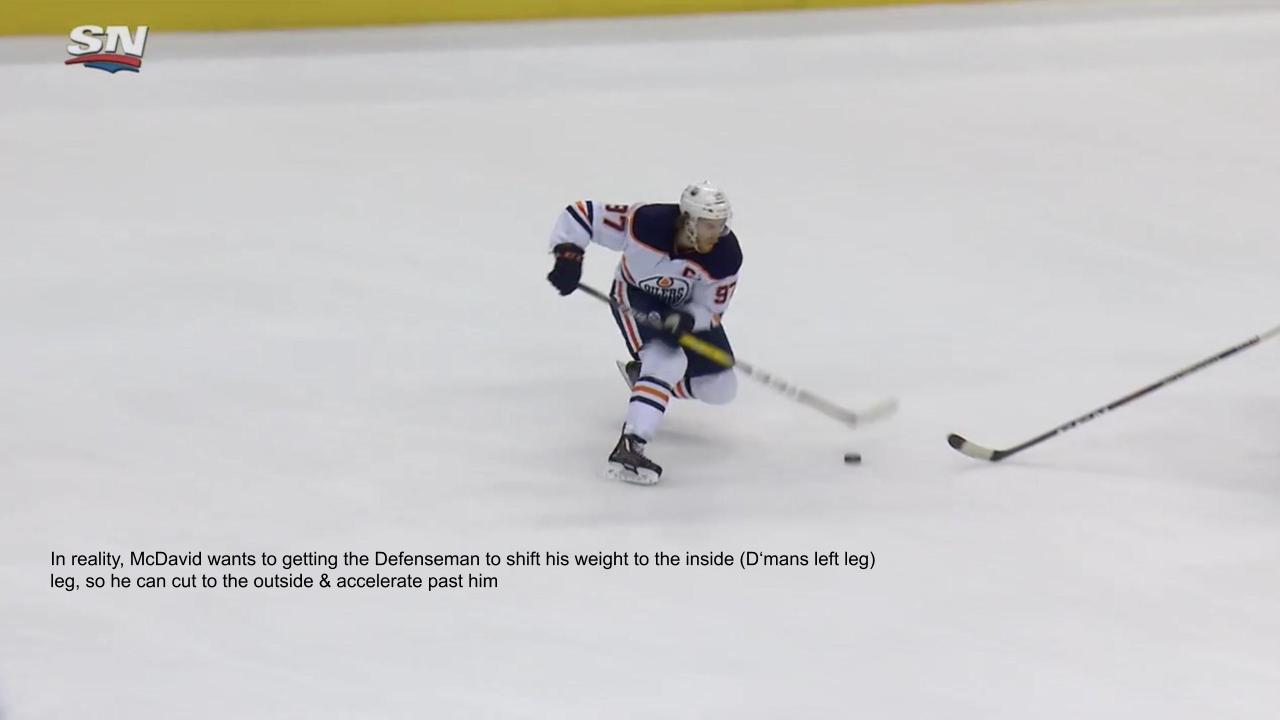 McDavid waits for the Defenseman to shift his weight to the inside (D‘mans left leg) leg, so he can cut to the outside & accelerate past him. 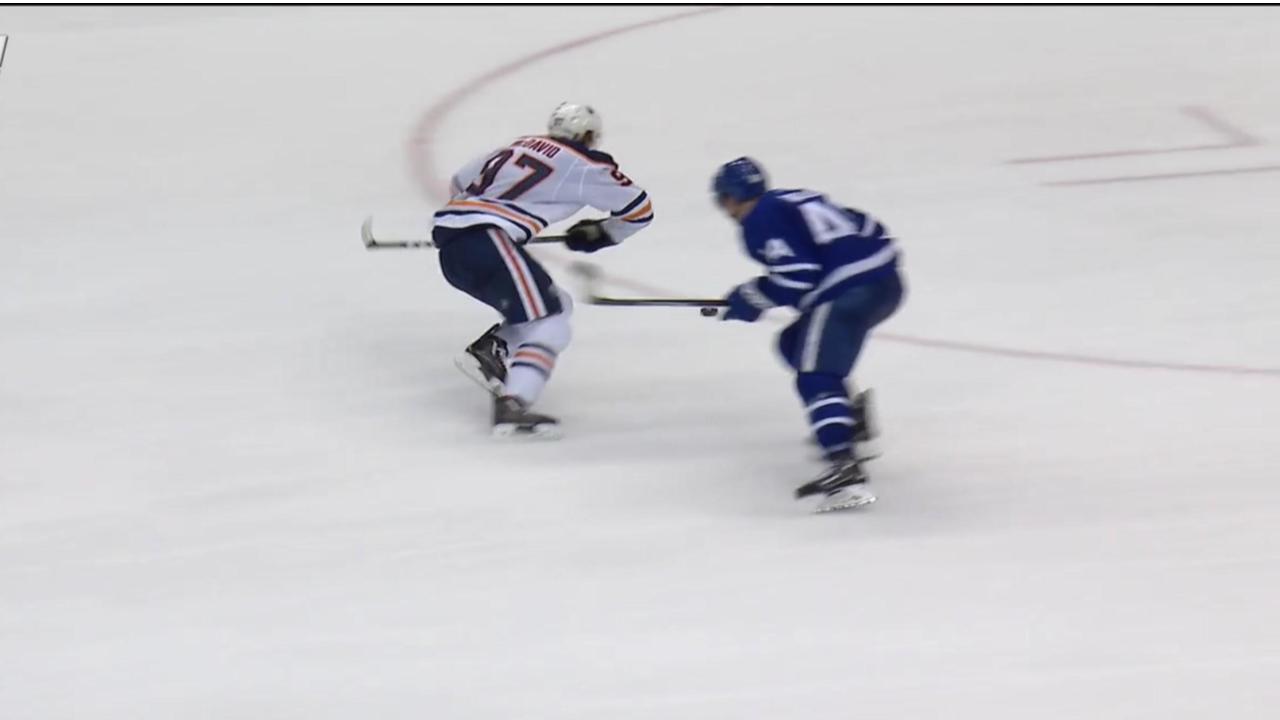 McDavid makes his move and explodes to the outside around the defender. 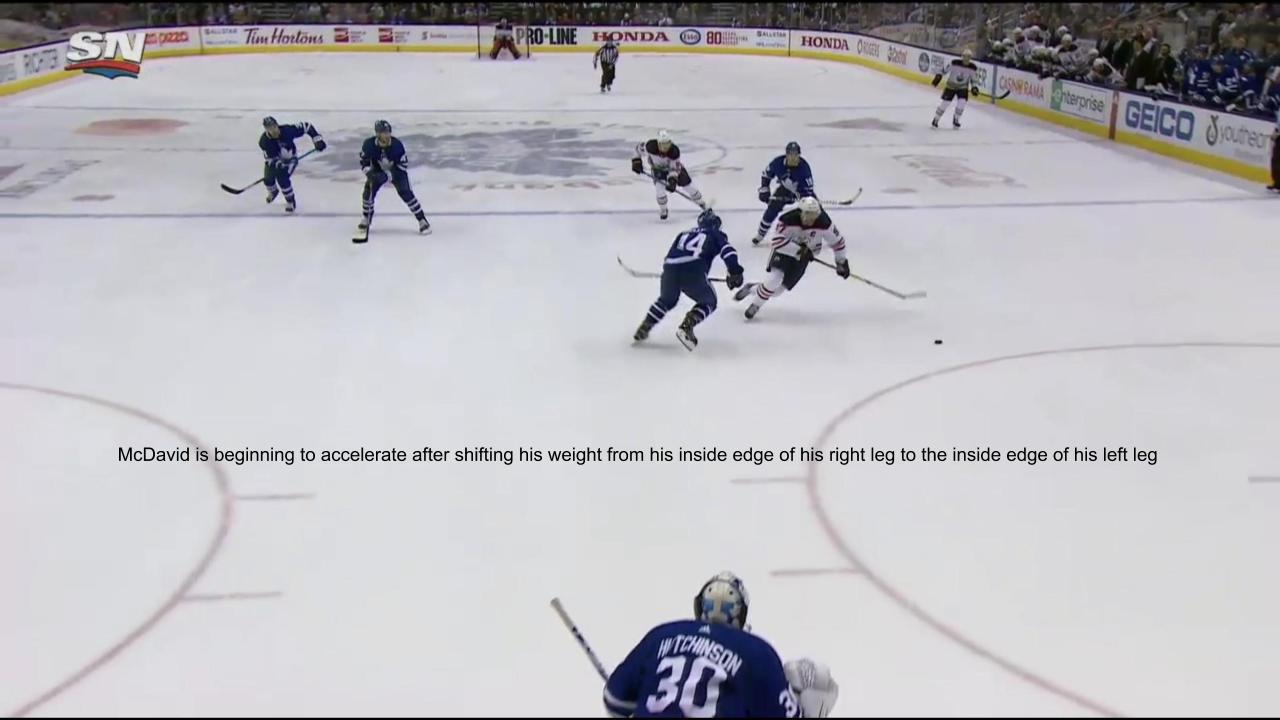 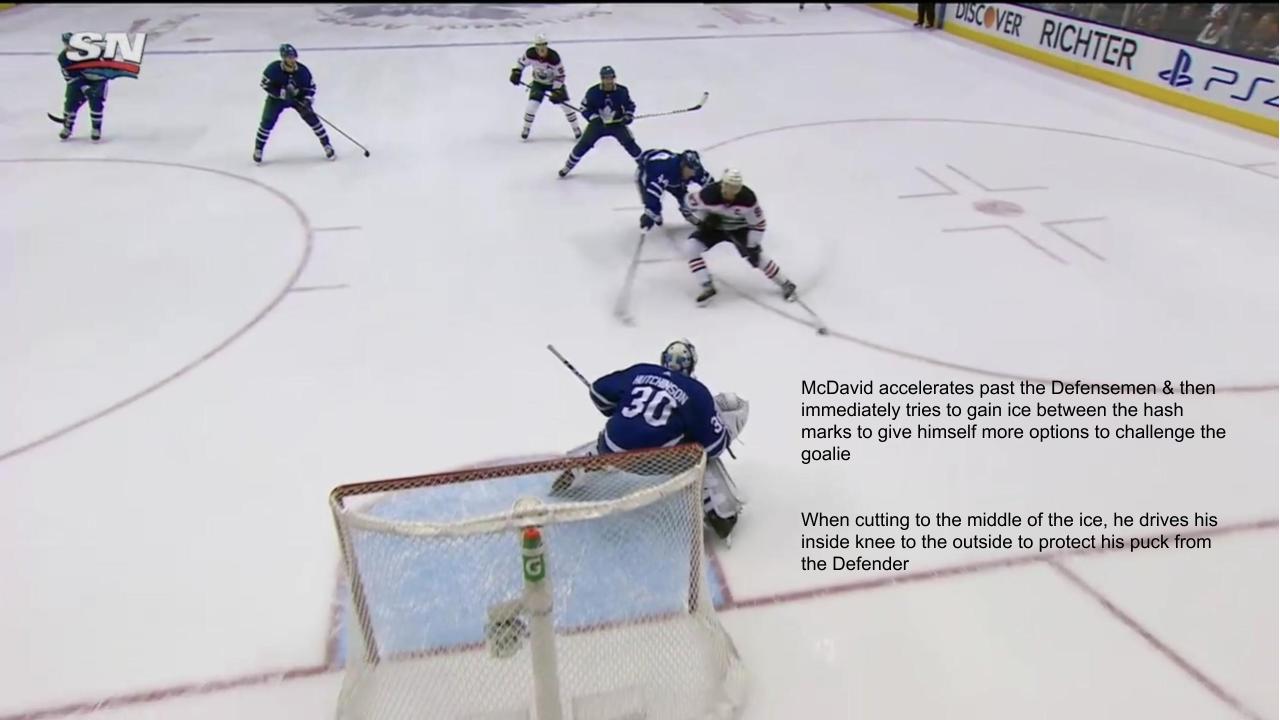 McDavid accelerates past the Defensemen & then immediately tries to gain ice between the hash marks to give himself more options to challenge the goalie.

When cutting to the middle of the ice, he drives his inside knee to the outside to protect his puck from the Defender. 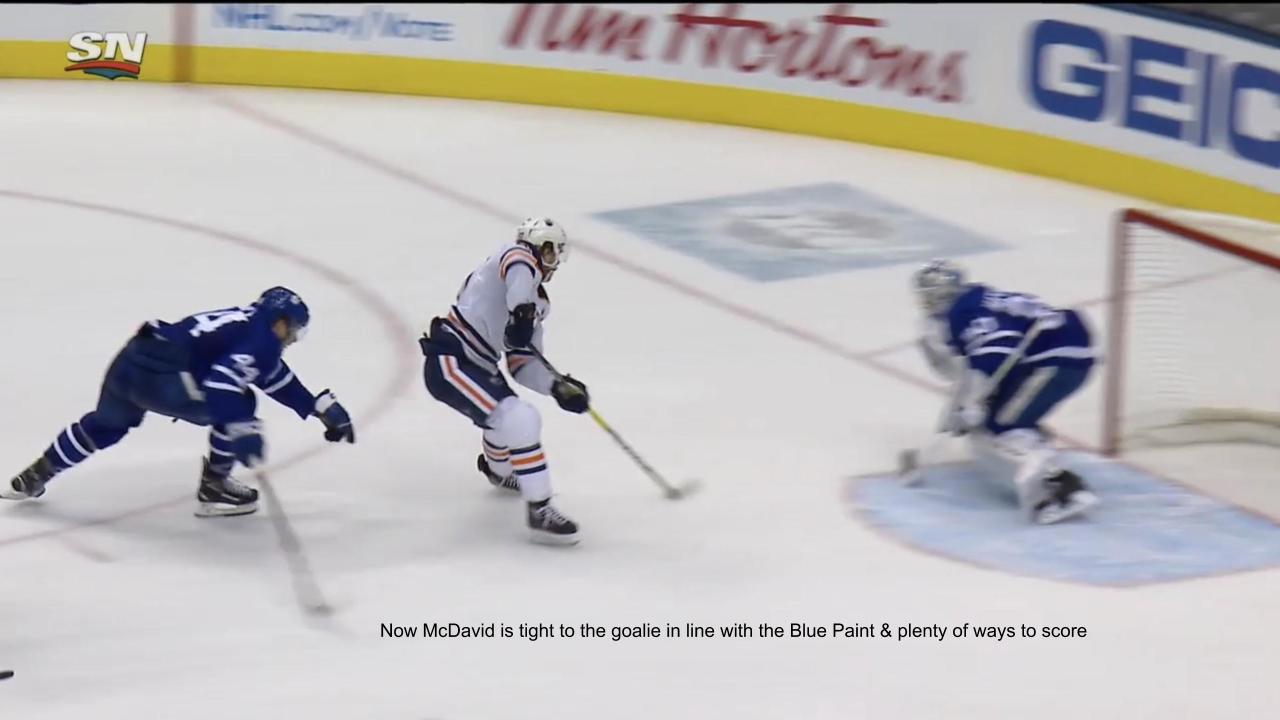 Now McDavid is tight to the goalie in line with the Blue Paint & plenty of ways to score. He buries it top shelf over the goalie's glove. 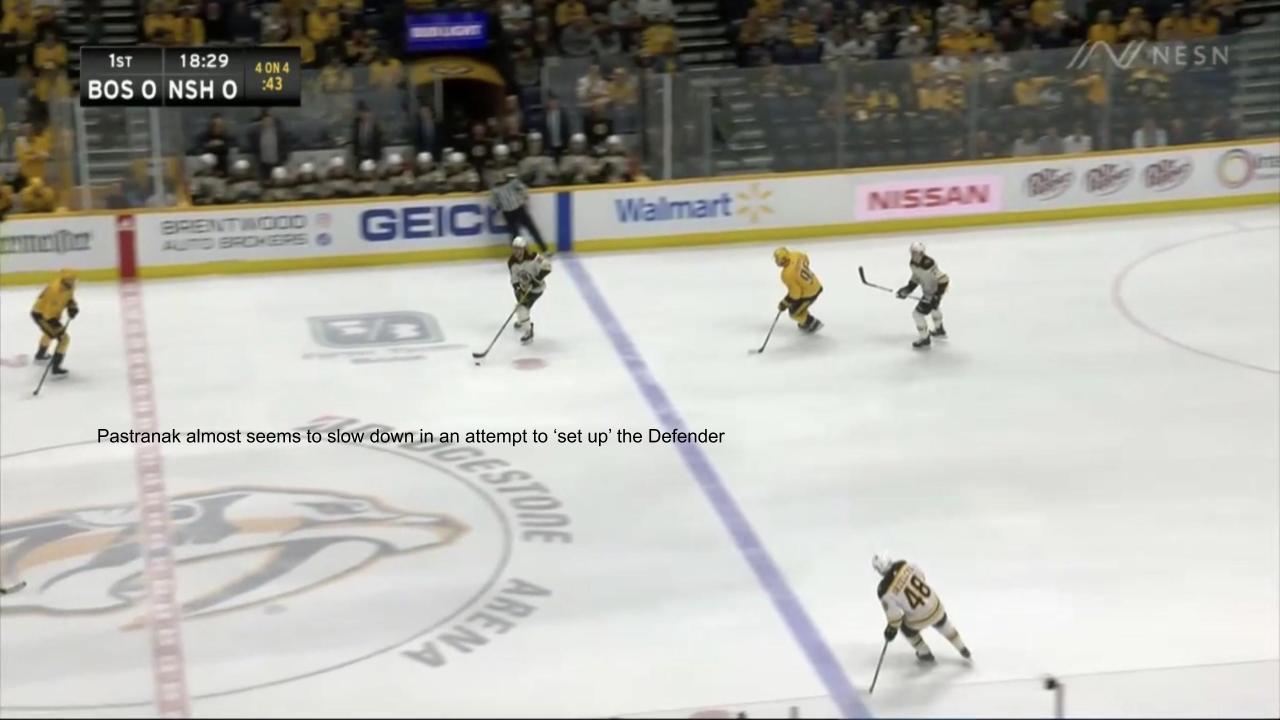 Example # 2: Pastranak almost seems to slow down in an attempt to ‘set up’ the Defender. 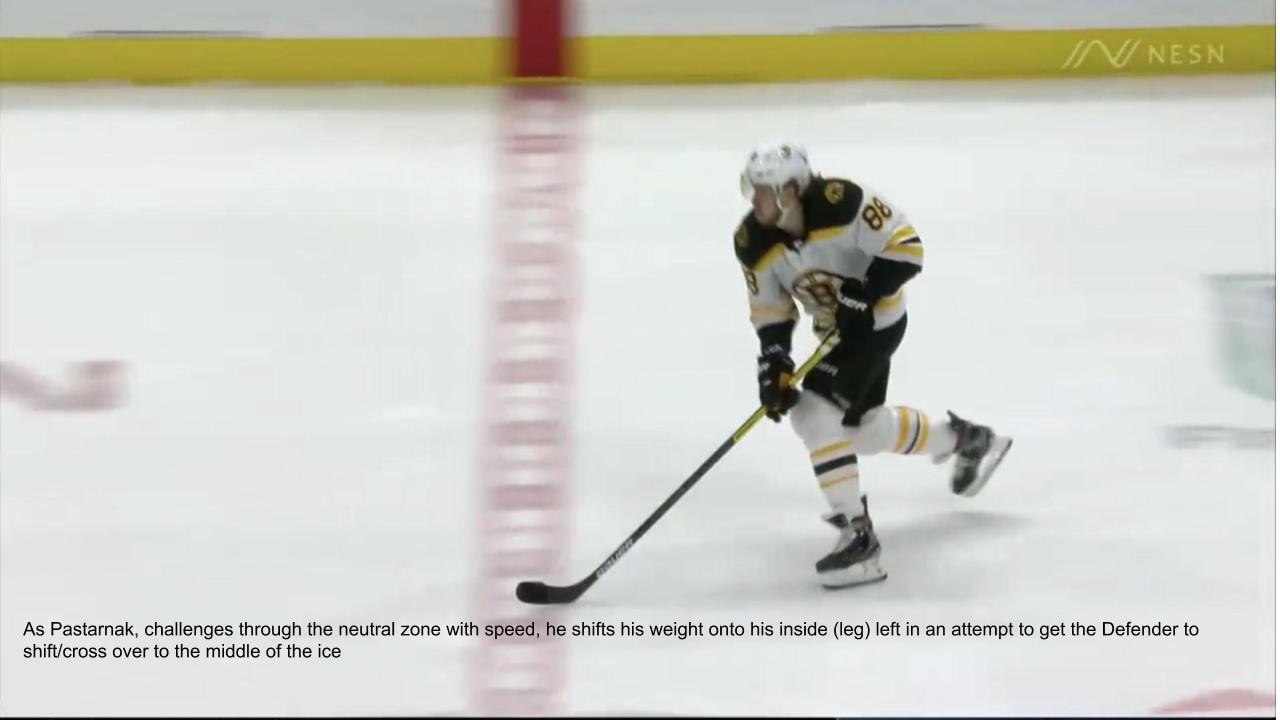 As Pastrnak, challenges through the neutral zone with speed, he shifts his weight onto his inside (leg) left in an attempt to get the Defender to shift/cross over to the middle of the ice. 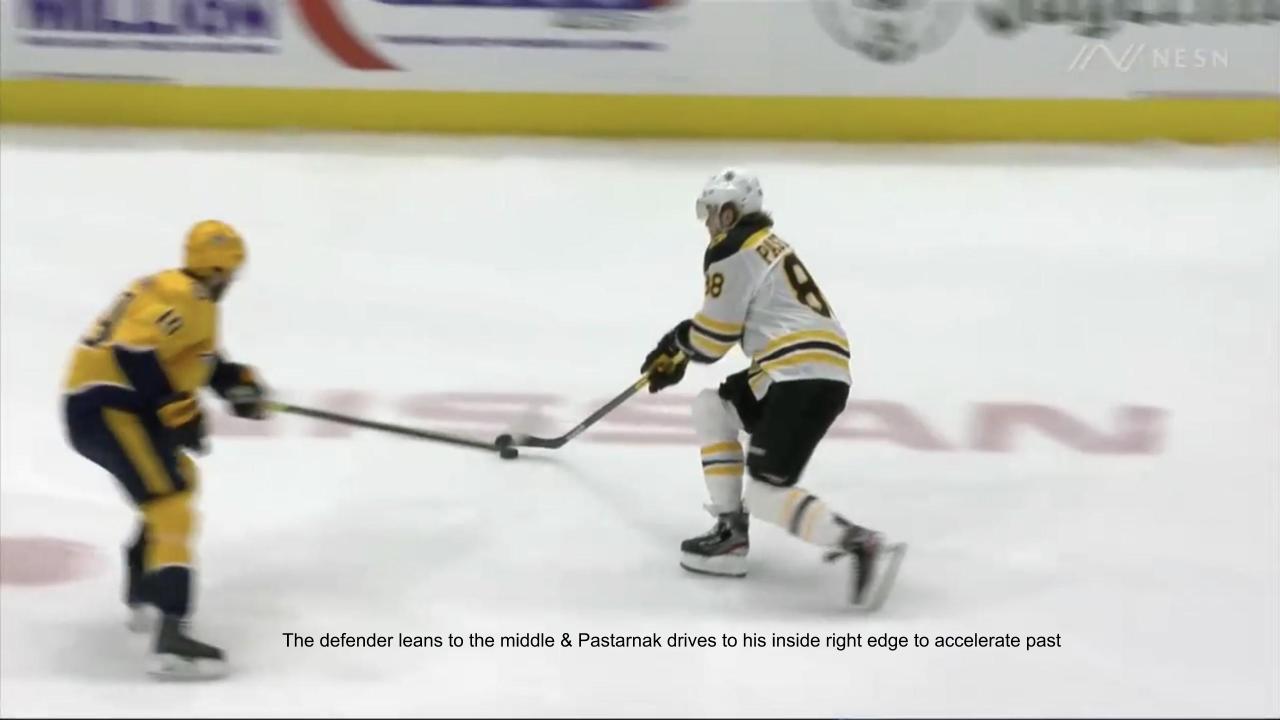 The defender leans to the middle & Pastrnak drives to his inside right edge to accelerate past. 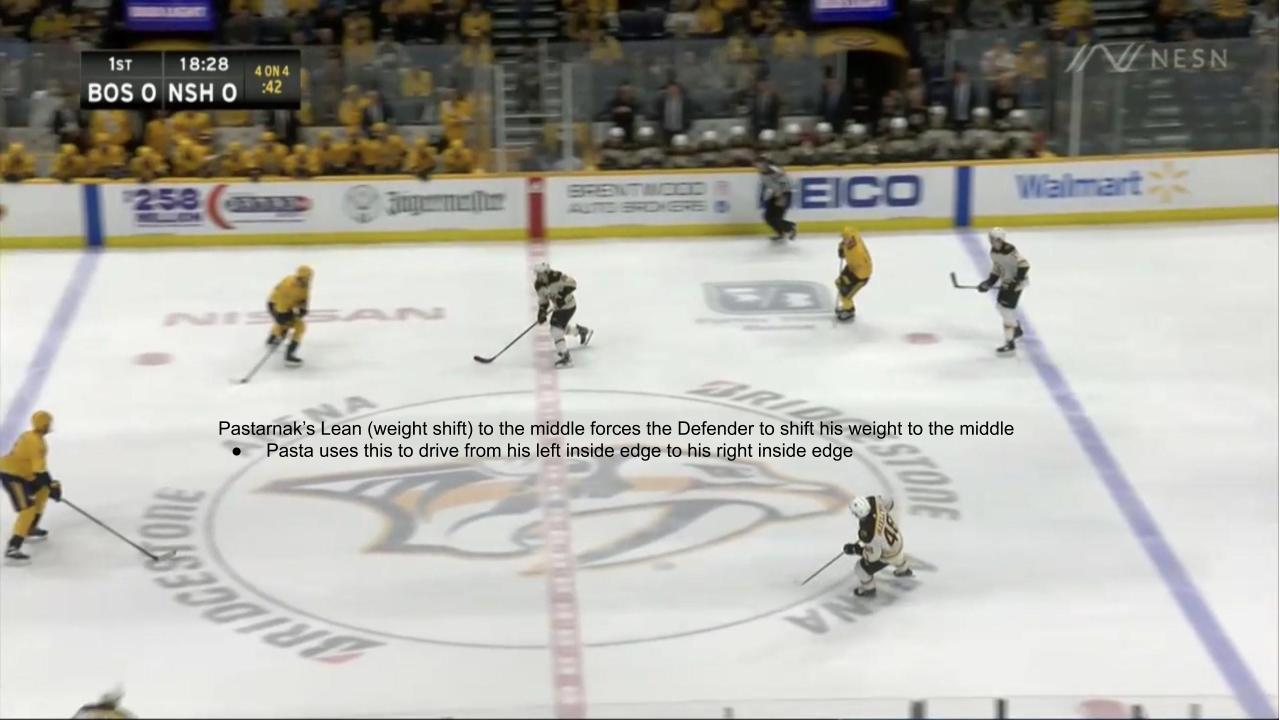 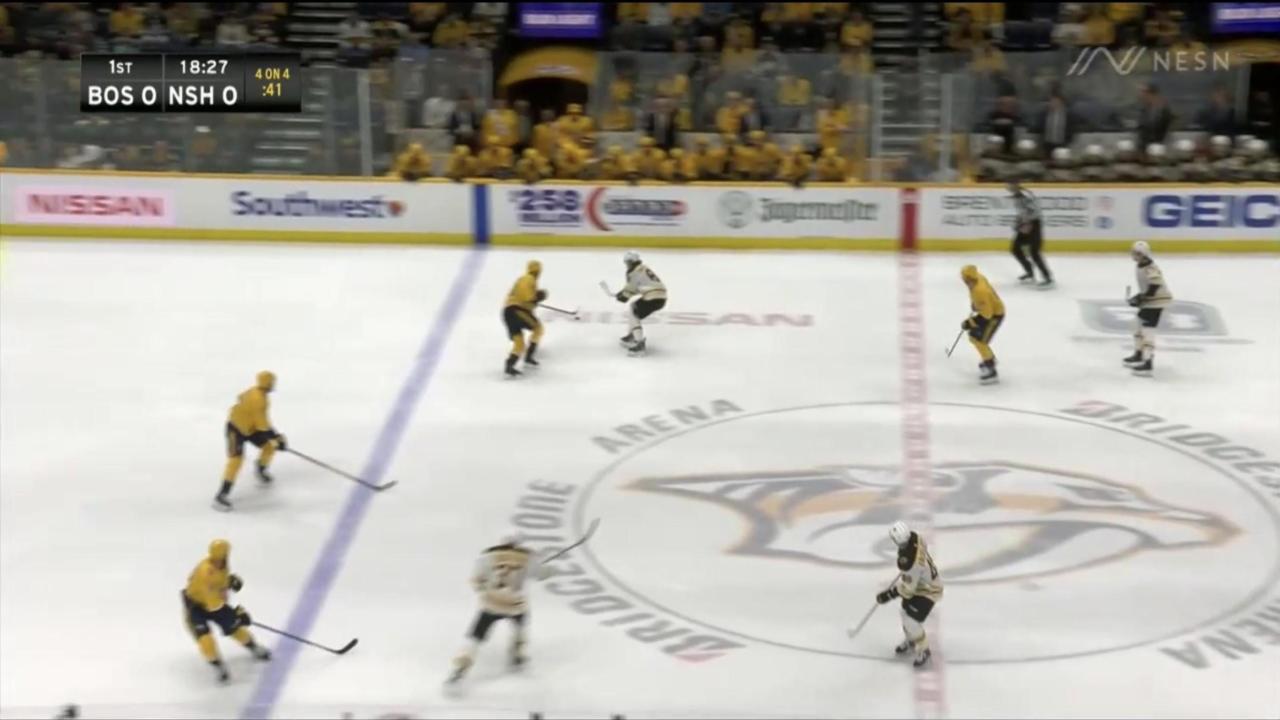 Pastrnak accelerates to the outside around the denfender. 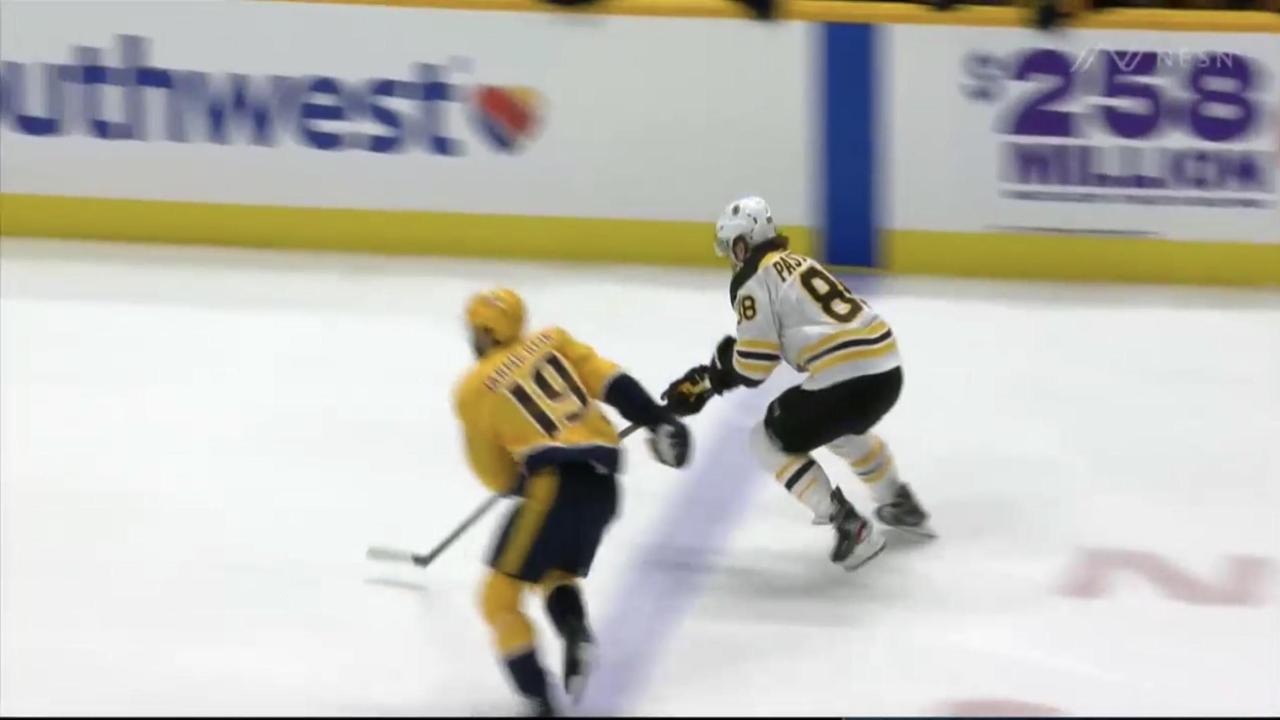 Pastrnak keeps the puck on the outside and begins to skate past the defender. 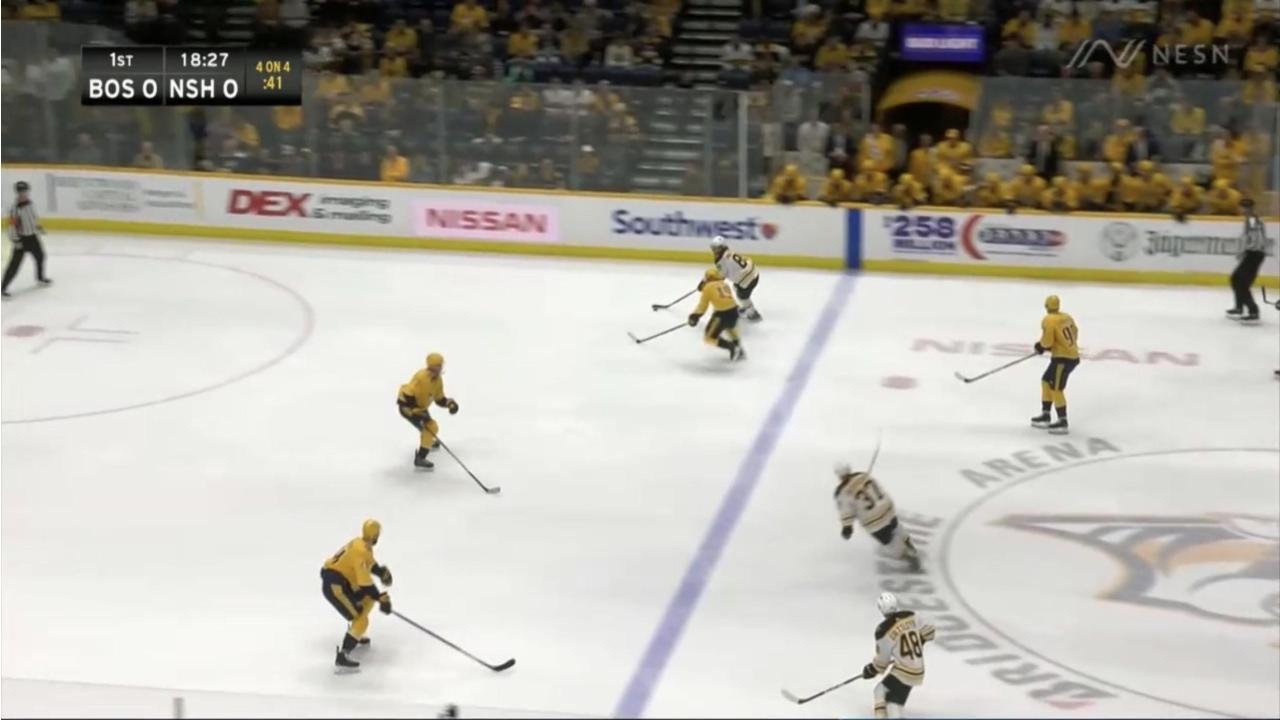 As he gets around the defender he picks his head up to look at his options. 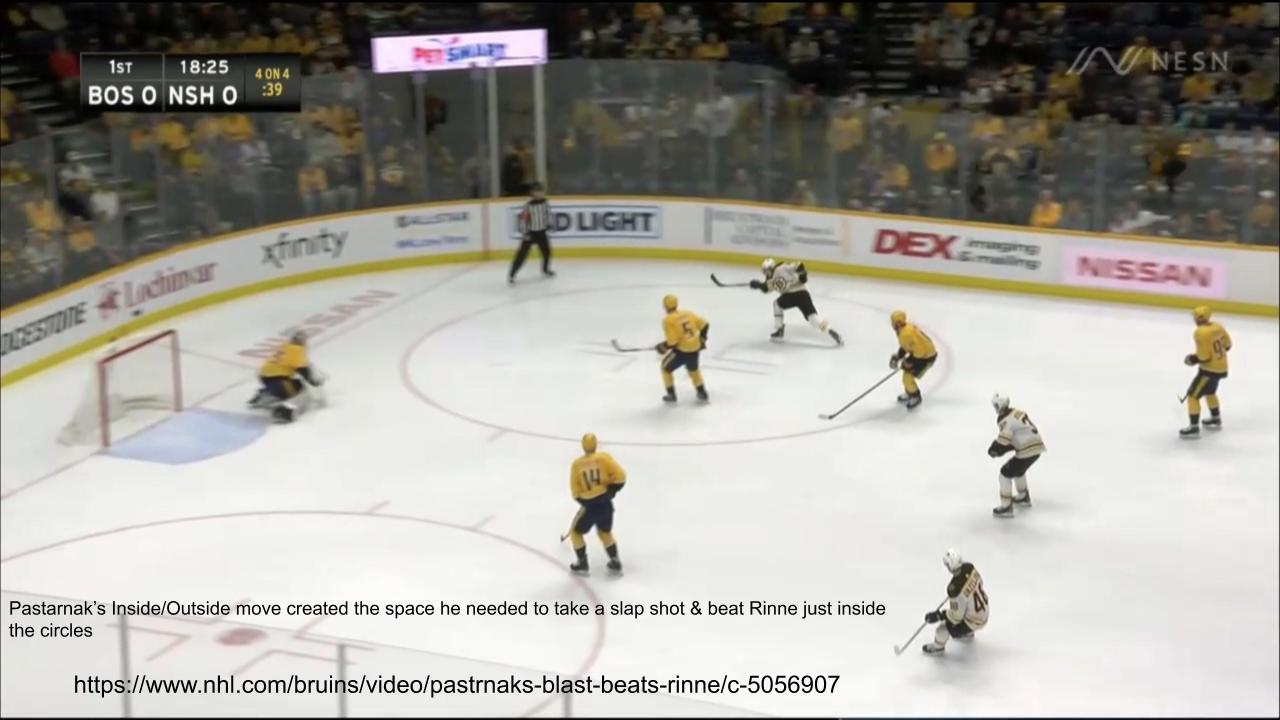 Pastrnak's Inside/Outside move created the space he needed to take a slap shot & beat Rinne just inside the circles.

In this drill, Coach Eaves explans the single shift. Once you are able to dial in this move from a stationary position, it is helpful to practice it while moving.

As time goes on, you can practice changing your pace (slowing down), adding deception, making the single shift deke and then exploding to out the outside (like the examples from McDavid and Pastrnak above).