Creating Opportunities Without The Puck

In this skill breakdown below, we review 4 examples where goals were generated by the players who DID NOT originally have the puck. We show that if you are able to get open away from the puck, it can create offensive opportunities.

Note: Moving to open space when your team has possession is a great concept for every player and team to learn. It will not always create a scoring opportunity, but it will be harder for the defense to defend and will give your teammate an outlet if they need it.

Always remember that your play WITHOUT the puck will create opportunities WITH the puck! 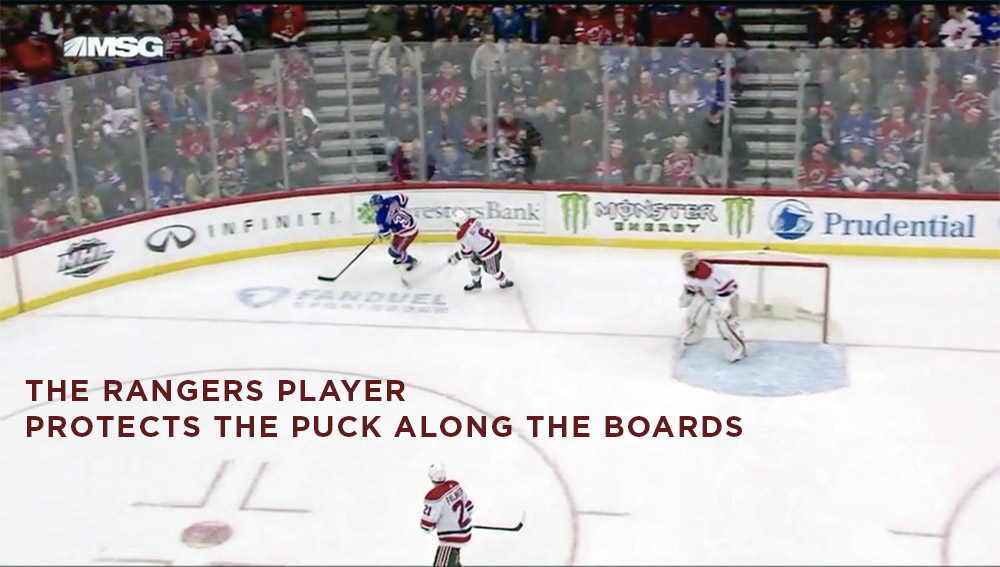 Example # 1: The Rangers player protects the puck along the boards as he looks for a player to pass to or a move to make on the defense. 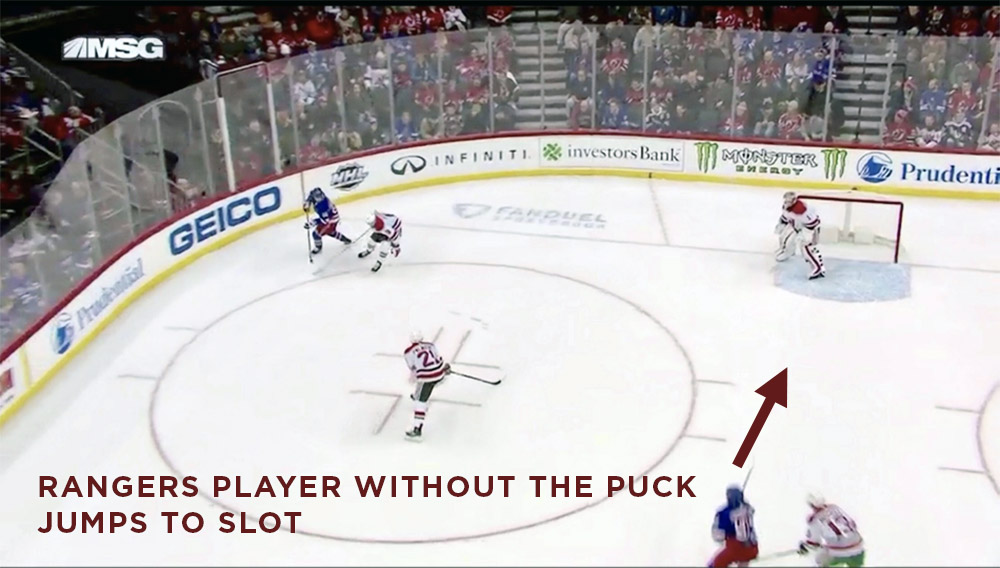 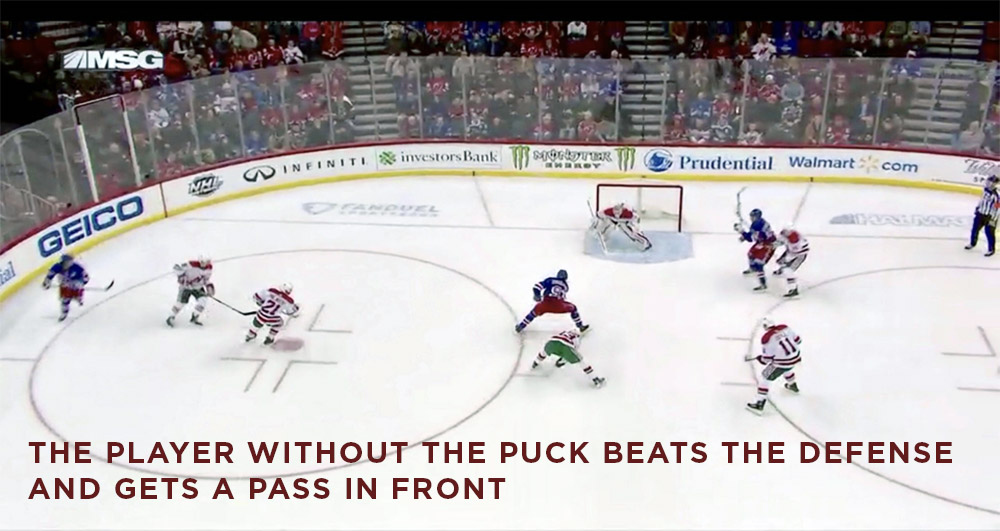 The pass is made from the corner to the open Rangers player in front and a goal is scored! 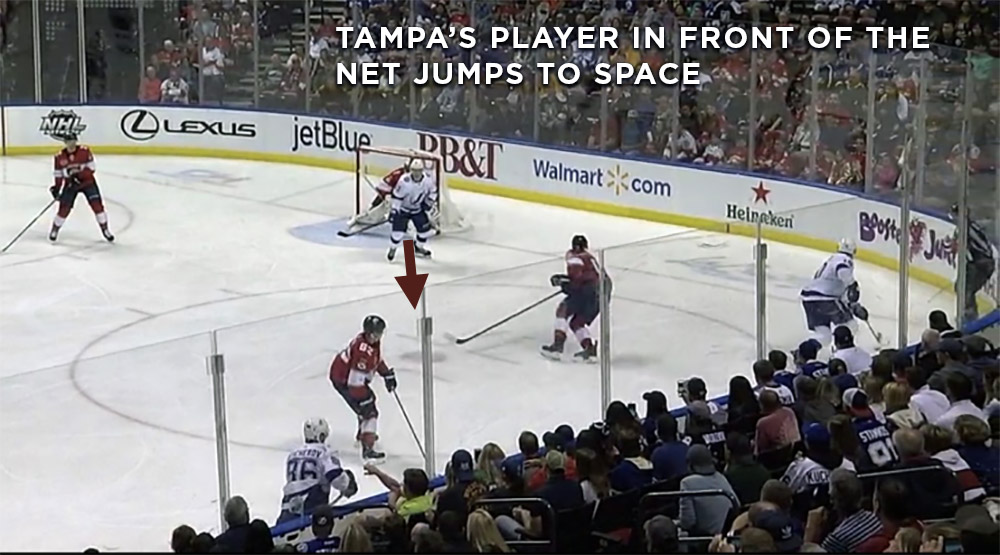 He jumps to the open space and provides his teammate in the corner an outlet. 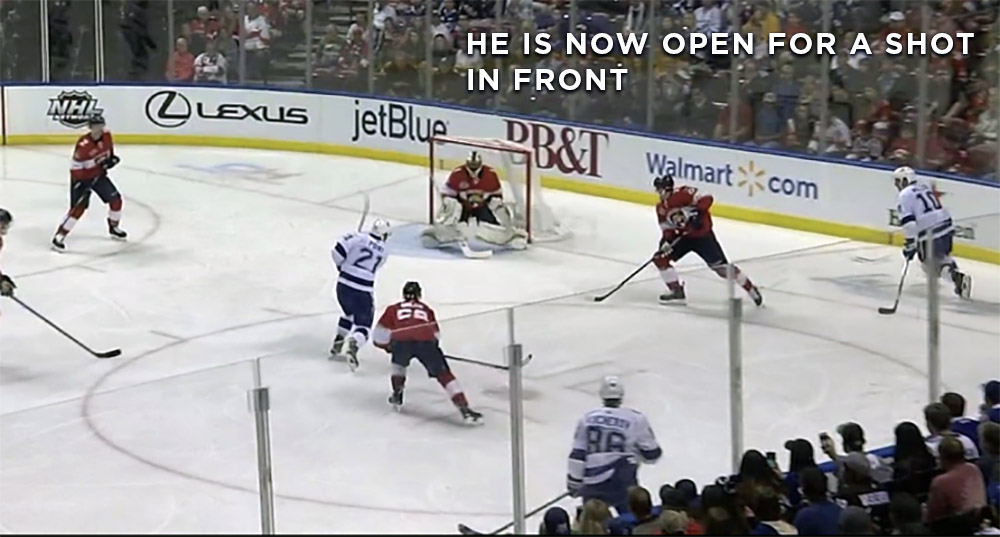 He receives the pass and one times it into the back of the net! 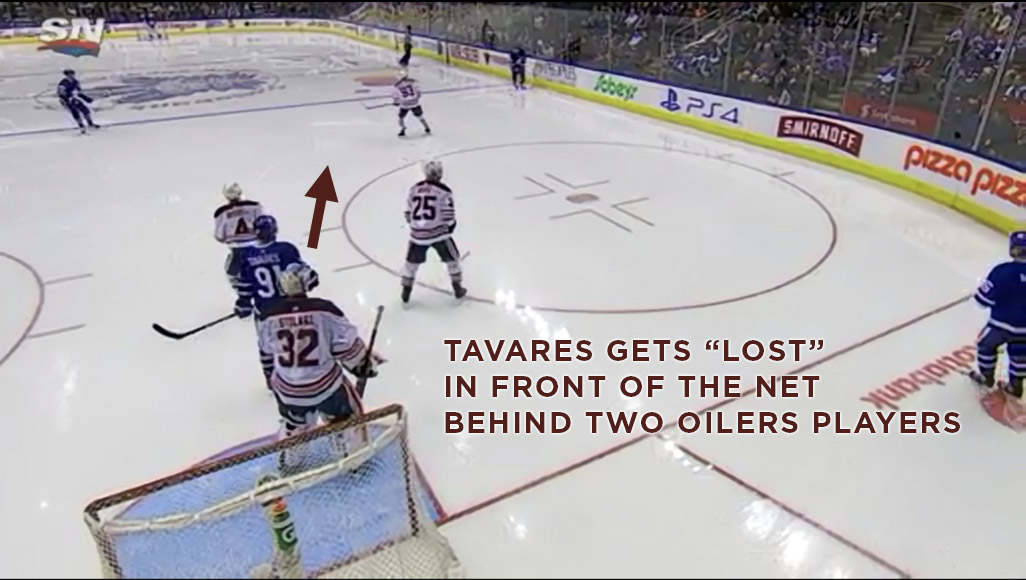 Example # 3: Pay attention to Jonathan Tavares in the next 4 slides. In this slide, you can see he is "lost" or "hidden" on the ice. He is behind two defenders and they do not know what he is going to do next.

He notices there is space in the high slot. He explodes to that open space as his teammate receives the puck in the corner. 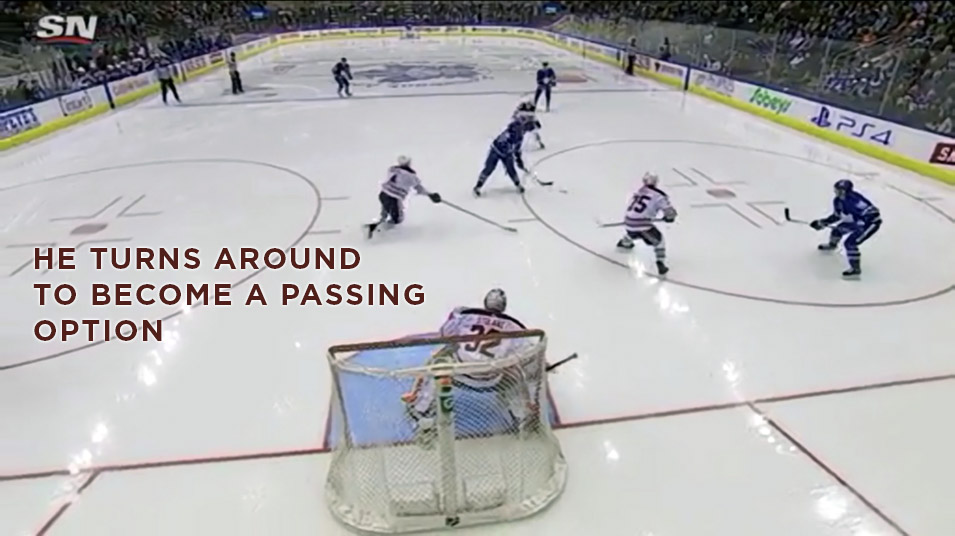 The teammate in the corner notices that Tavares is WIDE OPEN and passes him the puck as the defenceman are unable to react quickly enough. 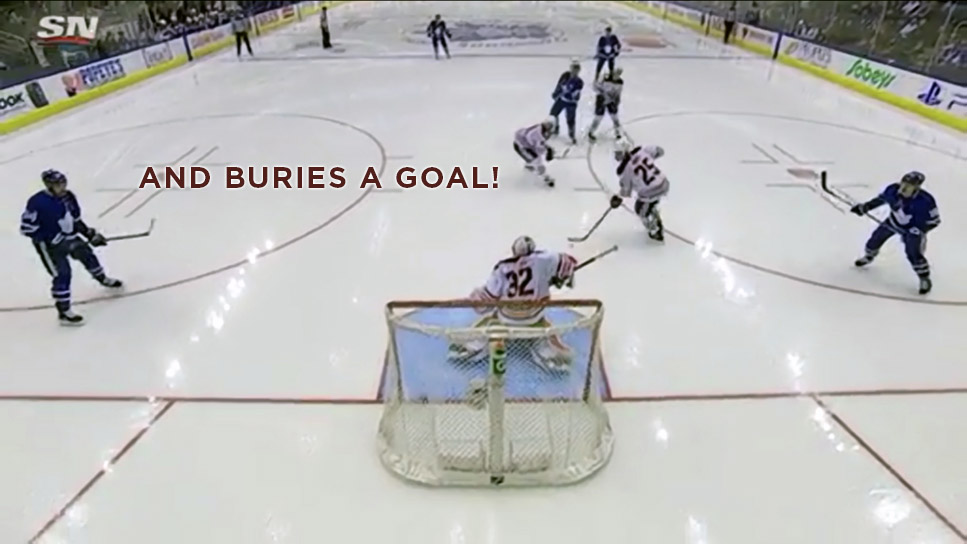 Tavares one-times the puck into the back of the net for a goal! 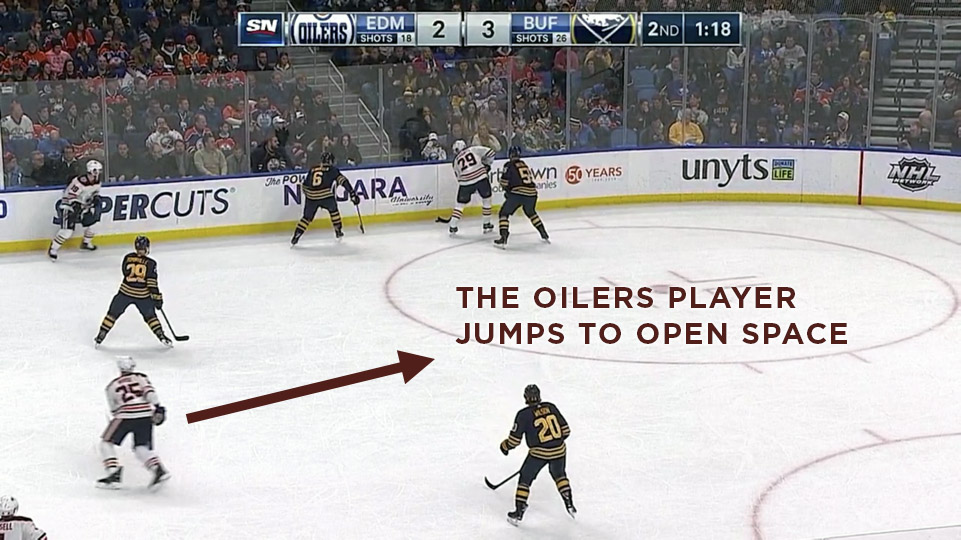 Example # 4: In this clip, watch the Oilers player in the high slot.

Also notice that all Sabres players are paying attention to the puck that is being tied up along the boards. 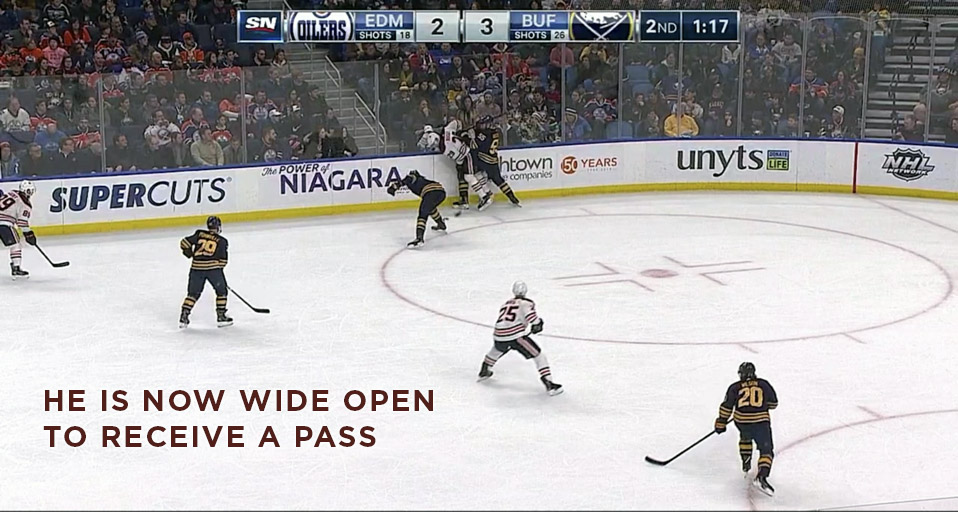 The oilers player sprints to the open ice! He is now WIDE OPEN to receive a pass and gives his teammate an outlet. 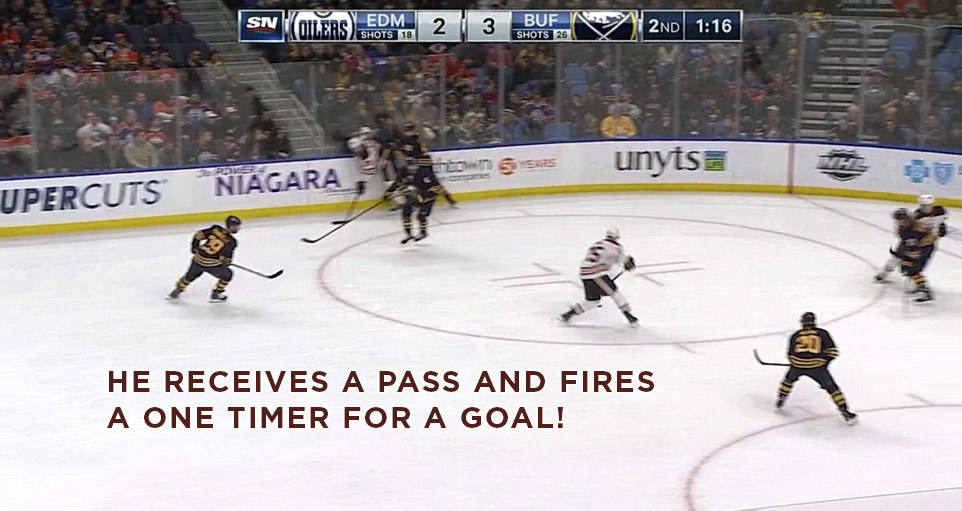 His teammate notices him wide open and chips him the puck in the slot for a one-timer goal!

Players will have to learn the concept of passing and moving to space in order to be successful. The size of the box can be changed depending on the skill level of the players.

Two players will play against each other and 1 player will be the "rover." To start the drill place a puck in the middle and have the two players compete to gain possession. When a player gains possession they try to make a pass with the "rover" and then skate to open space to receive a pass back. When they do this they earn a point.

A fun small area game that encourages players to jump to open space when they don't have the puck! After a player makes a pass they must jump to an open cone! The defenseman tries to block the passes. After a set number of passes (could be 2, 3, 4, or 5) the players are allowed to take a shot on net.

This is a great game that forces to get open that do not have the puck. The game can be set up in any size space of the ice. The smaller the space, the tougher it is. The goal is to have the forwards connect on 3 (or 4 or more) passes in a row. Once they do so, they are awarded a shot on net. The defense tries to break up the passes. If the defense breaks up the play 2 times, they are awarded a shot on net.

The Gates of Buffalo Passing Game is a fun game that encourages players to spread out and pass through "gates" to receive points. Teams are not allowed to pass through the same gate twice in a row so they must constantly move to open ice and communicate with each other.

As a competition, you can challenge teams to try to get the highest number of passes in 30 or 45 seconds before the next team comes on the ice.

Gates of Buffalo 3 on 3 Game

The Gates of Buffalo 3 on 3 Game is a fun game that has the same principles as the game above, but it is against another team. Each team works to pass though the "gates" while preventing the other team from doing so.

This challenges players to be alert and jump to open space when their team has the puck, and then be on the defense when the other team has possession.

As stated above, moving to open space when your team has possession is a great concept for every player and team to learn.

It will not always create a scoring opportunity, but it will be harder for the defense to defend and will give your teammate an outlet if they need it.

Remember that your play WITHOUT the puck will create opportunities WITH the puck!