In this video, Topher Scott from The Hockey Think Tank gives us a comprehensive breakdown of a goal that was generated by Brianne Jenner’s power-play principles on both the breakout and inside the zone. The video is a great example on how to successfully use your eyes and body language to deceive defenders and open up passing lanes. 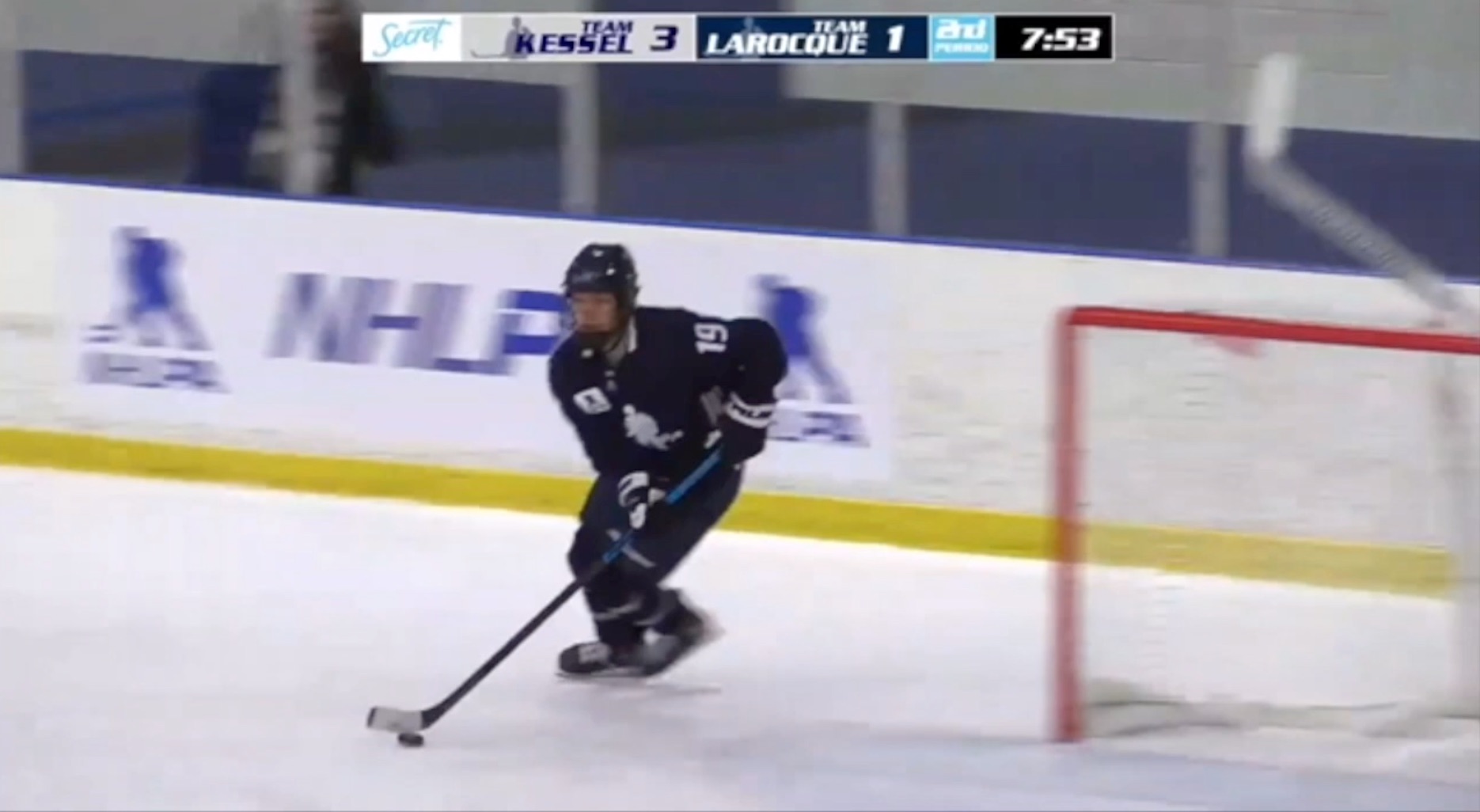 Image # 1: Jenner keeps her head up right after she picks up the puck behind the net to scan the ice and look for passing options. 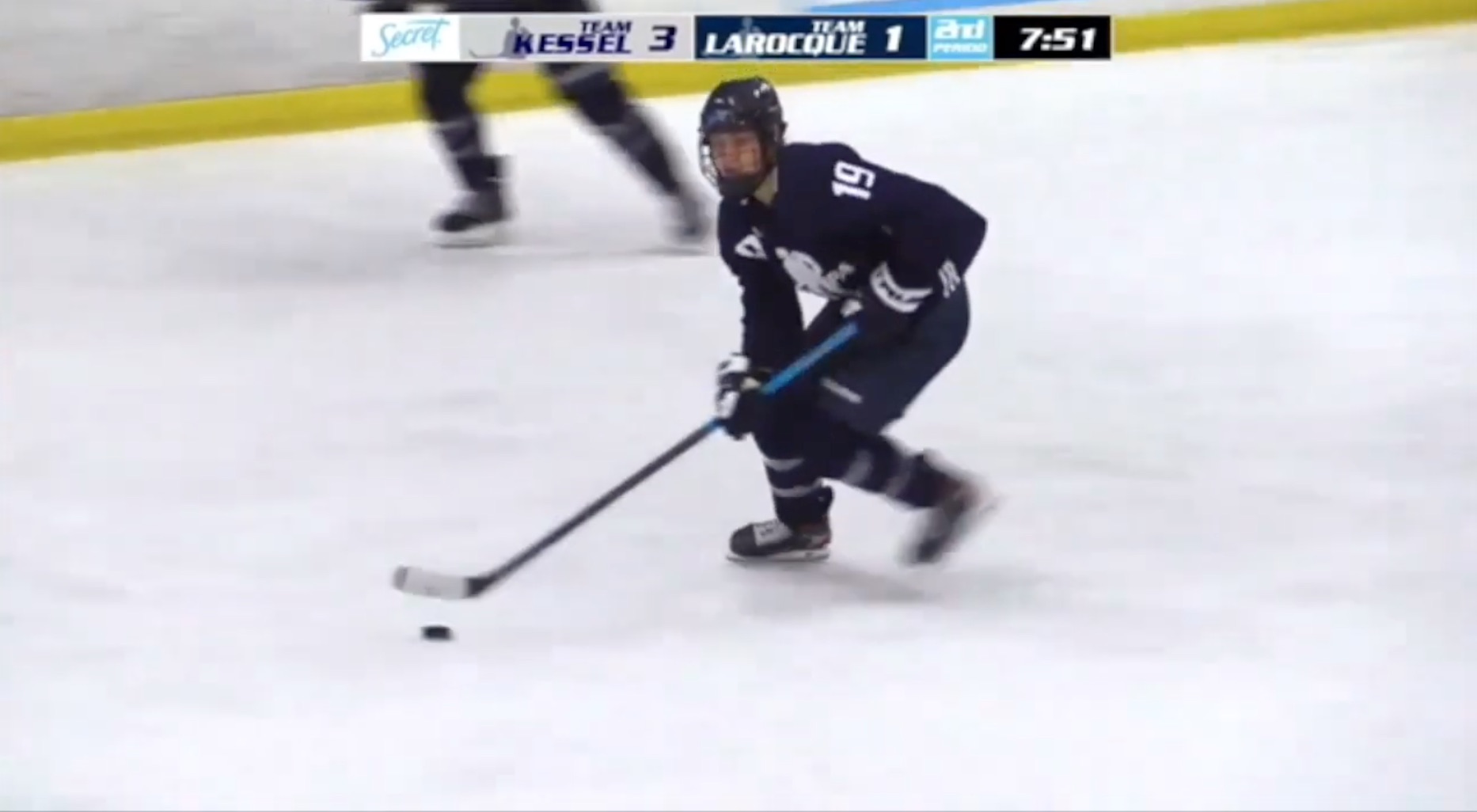 Image # 2: Jenner uses her eyes and body to make the opposition think she is going to pass to the center ice area. She does the opposite and quickly passes up the boards. 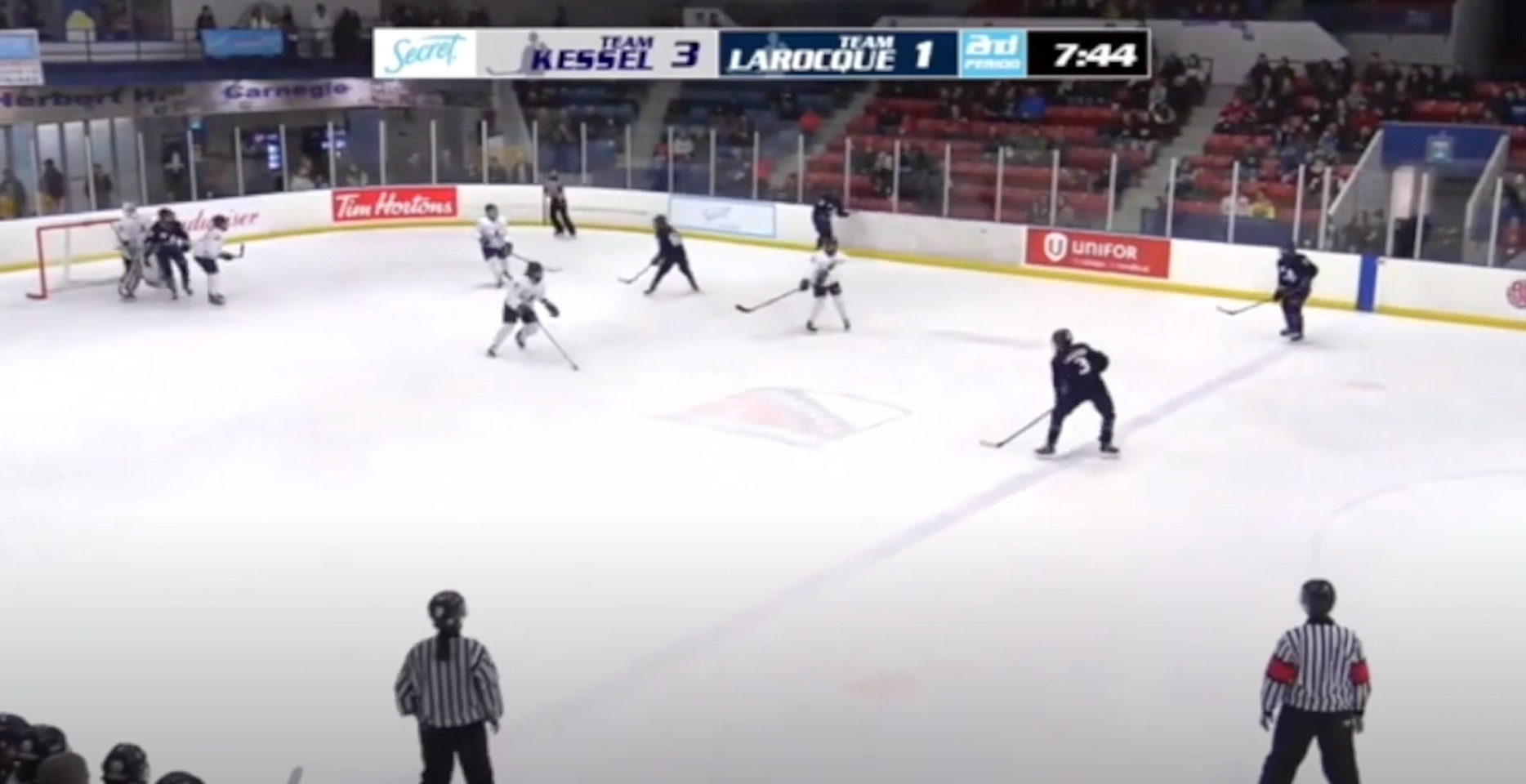 Image # 3: Jenner is in front of the net. After she passed to the winger she jumped to space to become a passing option. She did not immediately jump to her PP spot as she was waiting to see if there was a pass or shot on net. When she realized there would be no shot, she then went to her PP position. No need to rush to get to your position if there is a scoring opportunity unfolding. 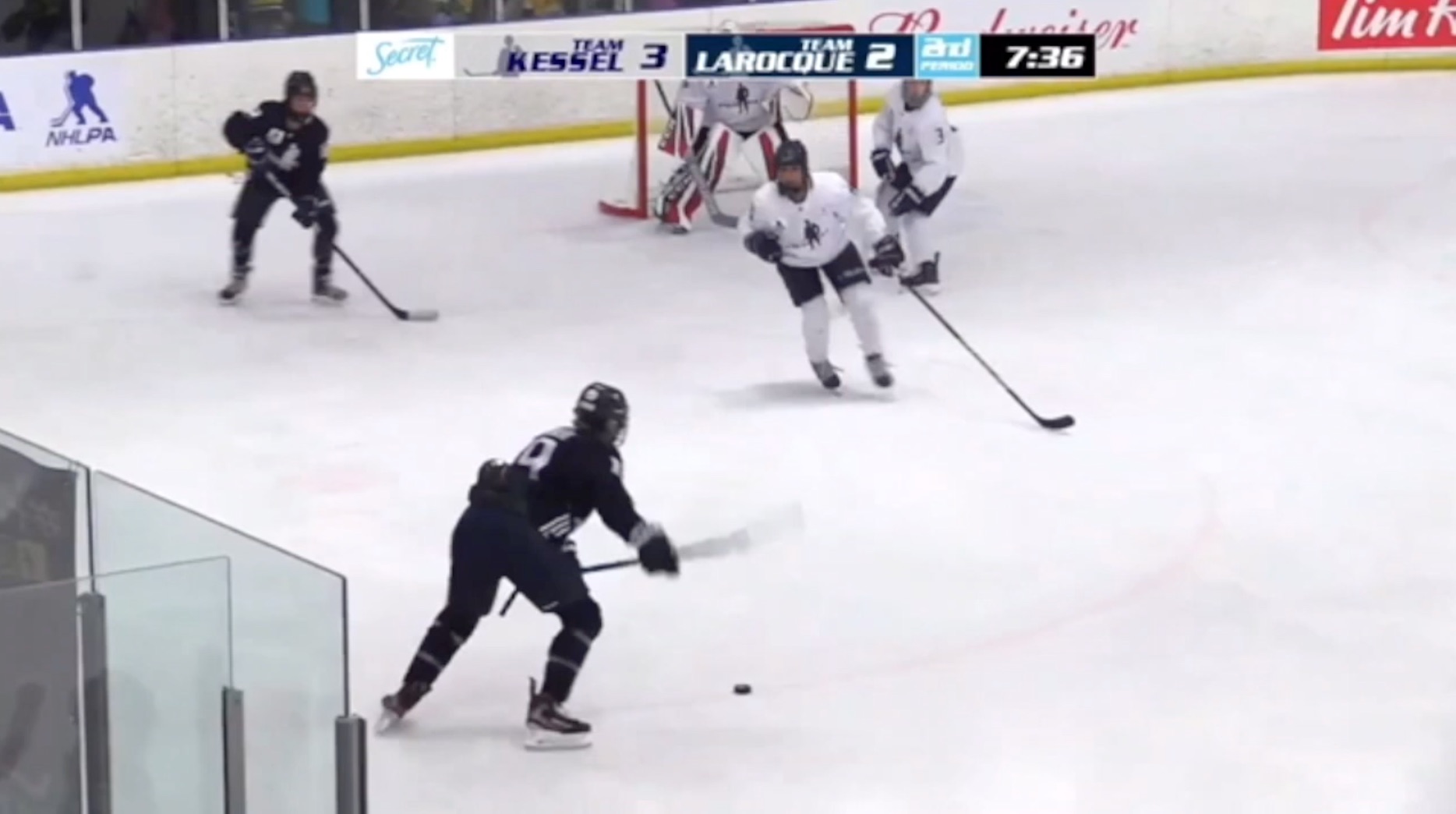 Image # 4: Jenner freezes both defencemen as she uses her body, head and eyes to make them think she is taking a slap shot. 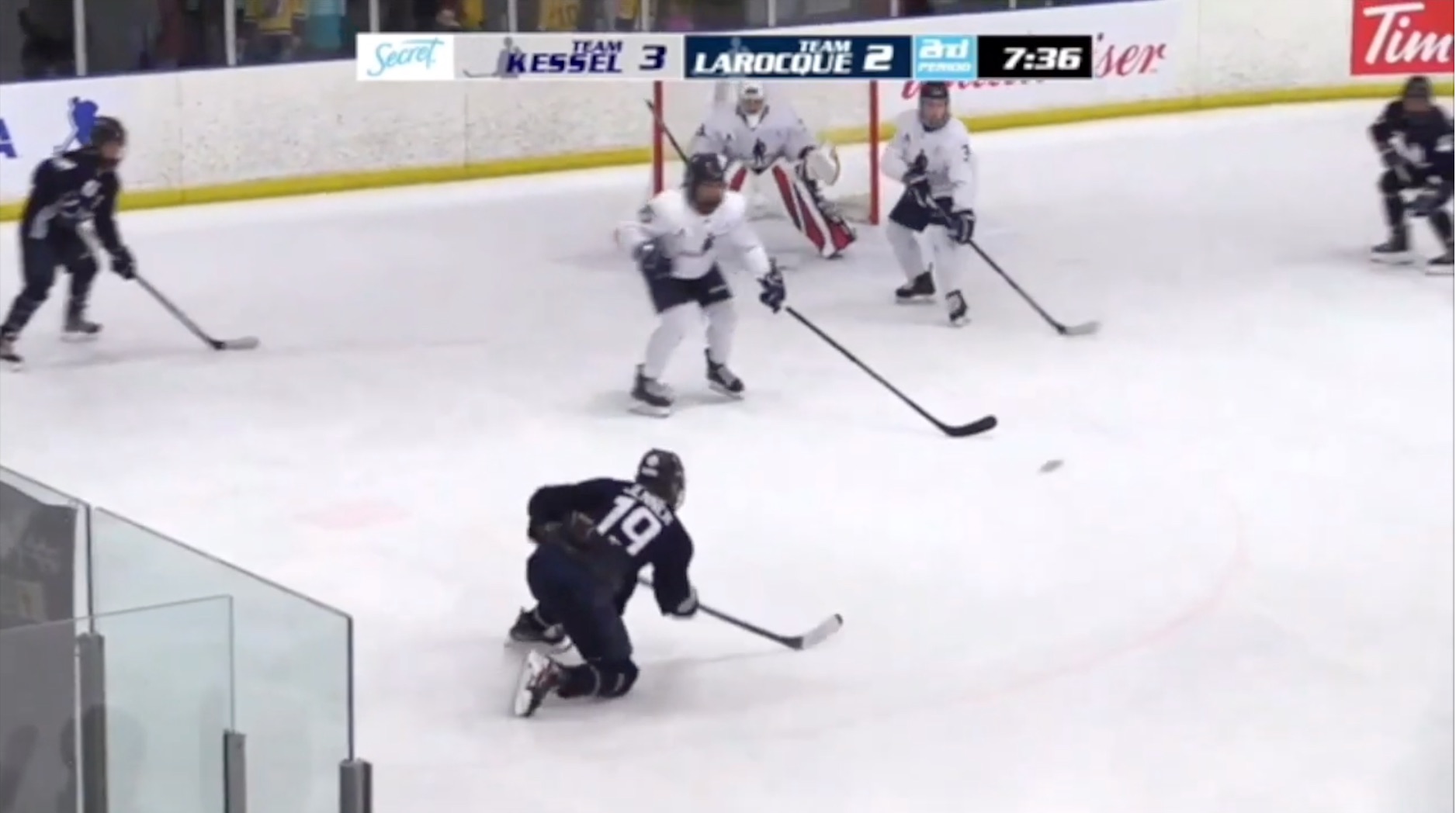 Image # 5:  Jenner fakes the shot and at the last second makes a pass to a breaking teammate. Amazing pass and a great Power Play Goal!

Players love this game! The Swiss 4 vs. 2 Scoring Game puts the defence at a disadvantage and helps the offence work on creating passing lanes and scoring opportunities. Use deception (and maybe even Brianne Jenner's fake slapshot) to be successful.

The Cross Fire Possession Game is a fun game to help players work on passing in tight areas. There are four players on each team. Two players on each team are inside the box while the other two players are on the outside of the box on opposite sides. The object of the game is to get the puck to go from one player on the outside of the box to their teammate on the opposite side using the players in the middle

Here is a setup of a power-play drill where defensemen and forwards can practice specific movements to generate space and look for scoring options. This video displays a first passing option. Coaches can also engage the other forwards in the corner along with the second defenseman at the point to make passes and practice redirects, one timers or tip-ins.

If you enjoyed Brianne Jenner’s power-play video breakdown from Topher Scott, please make sure to subscribe to the Hockey Think Tank Youtube Channel. You can also click the link below to learn more about Topher Scott's Distance Team Building Program.