For a 60 minute practice use the following outline: 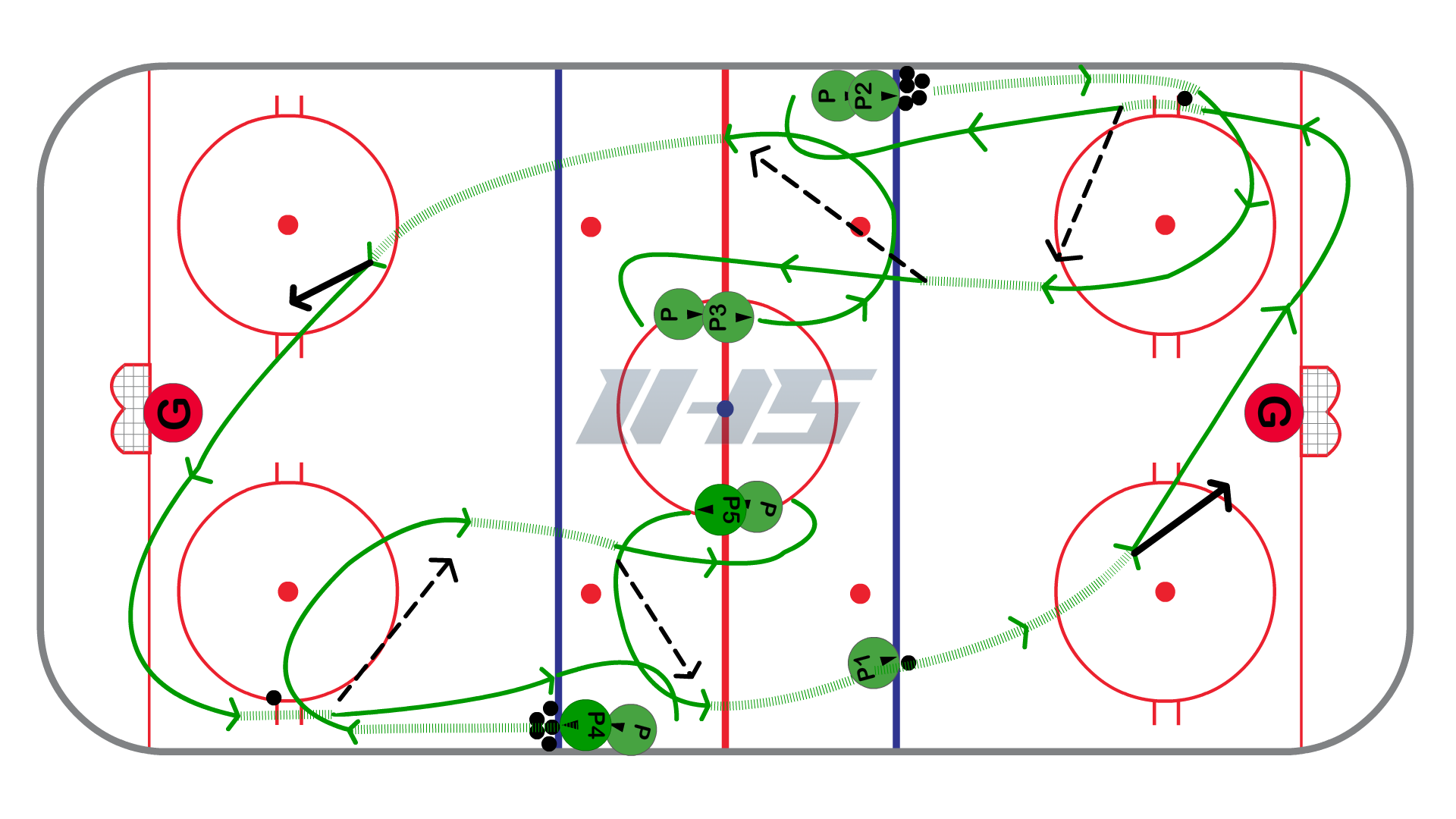 This is a full ice flow drill good for teams that are able to string together 3 consecutive passes without any trouble. For the most part this drill can be used for higher level bantam teams and all midget levels. The animation show this drill be used from one side only but once your players get used to the timing then you can run this out of both ends at the same time which gets 6 players involved at one time.

To start the drill have a player (P1) start at the blue line with a puck. On the whistle they go in and take a shot on net. After the shot they will go to the far corner and turn up ice. P2 will carry a puck down the wall and leave a puck for P1. P2 will turn towards the inside, face the puck, and receive a pass back from P1. P1 they goes to the end of the line where P2 started. As P2 starts to face up ice then P3 will swing towards the outside of the ice , face P2, and receive the pass from P2. P3 then goes down and takes a sho on net and continues into the corner. P3 now becomes P1 and goes to the corner before turning up ice to get a puck left by P2. 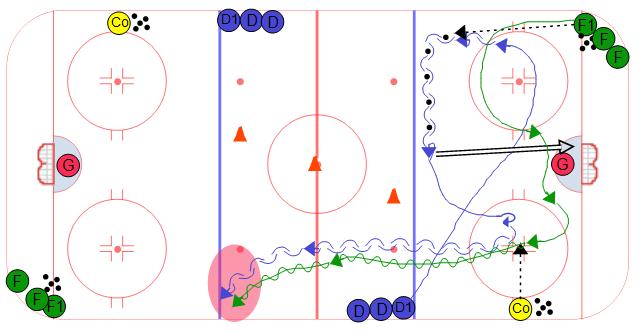 Here is a 1 vs. 1 hockey drill you can run out of both ends.  For defense, this hockey drill works on puck control, gap control, and transition footwork.  Forwards are able to work on hunting rebounds, proper puck support in the breakout, and 1 on 1 creativity.

Set up the hockey drill as shown in the diagram with pucks in the corner with the forwards and with the coaches along the wall.  On the whistle the defense will skate across the ice and transition around the face off dot.  The first forward in line will make a pass to the defense as they transition backwards.  The defense will control the puck and walk the puck to the middle of the ice for a shot on net.  The forward that made the pass follows the pass up the half wall and once the defense reaches the middle of the ice they skate towards the net hunting a rebound. After the shot the forward becomes the center in the breakout and provides an outlet pass for the coach on the wall.  The forward needs to try and stay inside the dots and receive a flat (horizontal) pass from the coach on the wall.  The forward wants to create seperation from the defense so they have time and space coming out of the zone.  If the forward gets too far ahead of the play and is looking back for the pass, then the defense can step up. 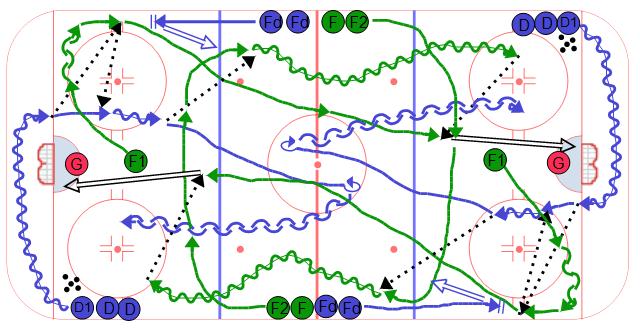 There are several points of emphasis in this hockey drill.  First, it allows wingers to get familiar with another option when receiving a breakout pass along the boards. So many times the wings try to force the puck up the boards when there is pressure coming from the point.  The defense in this drill provide support so the wings can give a pass back the defense.  After they make that pass they try to beat the pressure up the ice to create an odd man advantage.  The weak side forward needs to time their route to the middle so they are available for a pass from the defense and occupy the space vacated by the player applying pressure.  The attacking forward can then read the ice as they attack the defense from the other side.  Fd, after applying pressure becomes the backchecker.  You can run this hockey drill out of both ends if you have enough players.

This 2 on 1 hockey drill is a high tempo drill that works on fast 2 on 1 rushes, quick transitions, and timing in the neutral zone.  To set up the drill place four equal lines at the blue lines along the boards.  In this diagram the F1 lines will have the pucks.  The drill start with the defense jumping into the center of the ice, transitioning backwards, and calling for the puck from F1.  F1 takes a couple of strides with the puck and makes a pass to D1.  D1 controls the puck as they are skating backwards and tranistions up ice using an escape move if they desire. F1 continues with speed to be an outlet on the opposite side of the ice while F2 times their break into the center of the ice so they can be a middle outlet as the defense turns up ice. D1 can pass to either F1 or F2 in transition.   The forward that receives the pass then makes a pass to D2 for another regroup. After this regroup the forwards go agains D1 in a 2 on 1 towards the other net.

A couple of things for the players to work on in this drill.  First, good 2 on 1 habits for both the forwards and defense.  The defense should try to keep the forwards to the outside while still making the pass to the middle difficult.  Forwards should either go hard to the net or stagger their attack so the  defense cannot intercept the pass.  In transition, F2 has to time their break to the middle so they are not looking back for a pass.  The fowards should also try to be in position to make short passes through the neutral zone as opposed to long verticle passes.

If you like this drill then have a look at some more 2 on 1 hockey drills.  Denis Savard has also posted one of his favorite 2 on 1 drills called the Seven Pass 2 on 1 Drill. 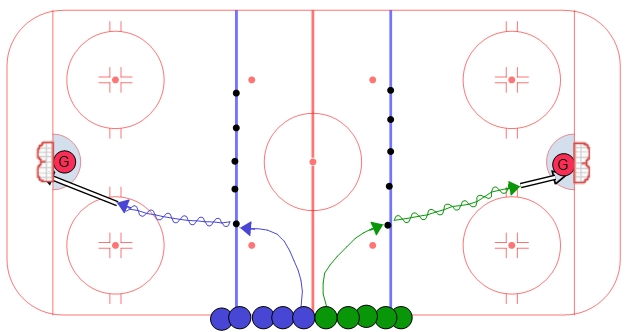