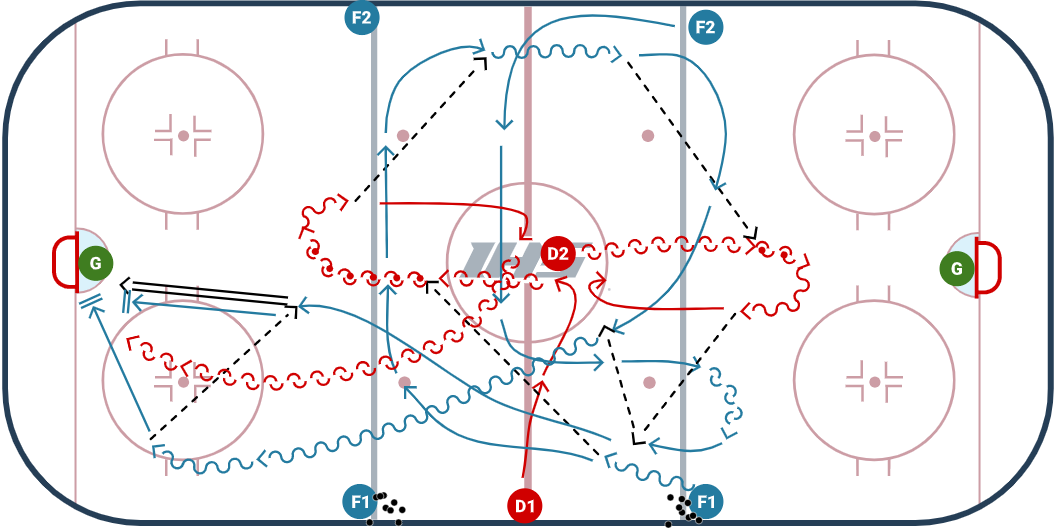 This 2 on 1 hockey drill is a high tempo drill that works on fast 2 on 1 rushes, quick transitions, and timing in the neutral zone.  To set up the drill place four equal lines at the blue lines along the boards.  In this diagram the F1 lines will have the pucks.  The drill start with the defense jumping into the center of the ice, transitioning backwards, and calling for the puck from F1.  F1 takes a couple of strides with the puck and makes a pass to D1.  D1 controls the puck as they are skating backwards and tranistions up ice using an escape move if they desire. F1 continues with speed to be an outlet on the opposite side of the ice while F2 times their break into the center of the ice so they can be a middle outlet as the defense turns up ice. D1 can pass to either F1 or F2 in transition.   The forward that receives the pass then makes a pass to D2 for another regroup. After this regroup the forwards go agains D1 in a 2 on 1 towards the other net.

A couple of things for the players to work on in this drill.  First, good 2 on 1 habits for both the forwards and defense.  The defense should try to keep the forwards to the outside while still making the pass to the middle difficult.  Forwards should either go hard to the net or stagger their attack so the  defense cannot intercept the pass.  In transition, F2 has to time their break to the middle so they are not looking back for a pass.  The fowards should also try to be in position to make short passes through the neutral zone as opposed to long verticle passes.

If you like this drill then have a look at some more 2 on 1 hockey drills.  Denis Savard has also posted one of his favorite 2 on 1 drills called the Seven Pass 2 on 1 Drill.