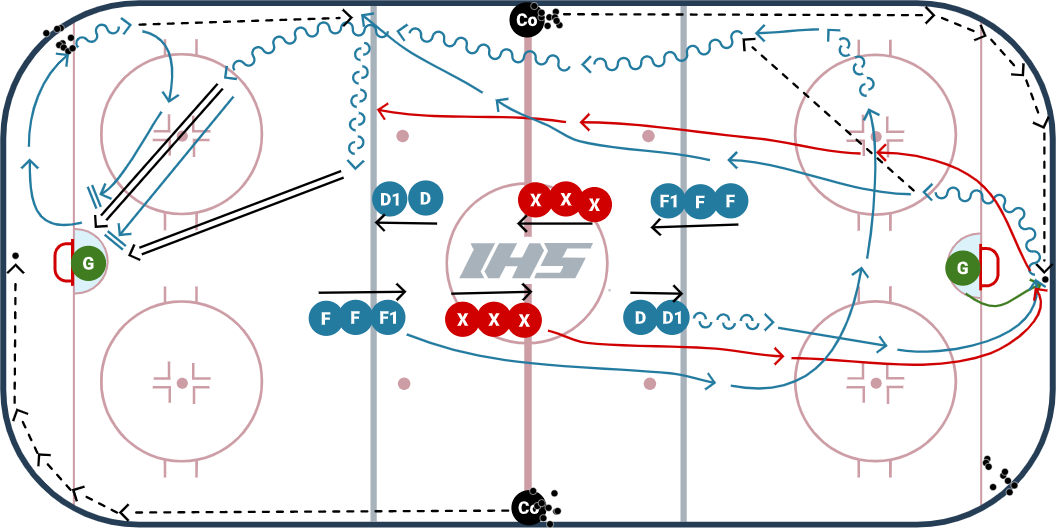 This drill creates a sense of urgency as the defense retrieve the puck behind the net, use the net to fend off the forechecker and then move the puck up ice to the forward with speed. It includes good concepts for forwards, defense, and goalies.

The drill starts by the coach rimming the puck around the boards so that the goalie is able to stop it behind the net and set it up for the defense. The defense starts backwards at the blue line, quickly pivots and skates to retrieve the puck behind the net. The defense will have to have urgency when retrieving the puck and use the net to fend off the forechecker. The forechecking forward has to pressure as hard as they can and after the puck is moved up ice they have to backcheck and try to pressure the puck all the way to the far blue line. The supporting forward will time their swing to support the defense as they bring the puck up the ice. The timing of their swing is important. They want to slightly ahead of the defense but not too far up ice so they don't have to look back for the puck.

After the initial rush the forward picks up a puck out of the corner and pass it back to the defense. The defense walk the puck along the goal line and takes a second shot on net.

To keep the diagram less cluttered it is only shown on one side of the ice, however, this drill runs out of both sides at the same time.

satter10 on 8/14/2015
Great drill for goalies to work on playing the puck and setting it up for the defense. It also allows defense to work on using the net and moving the puck up ice under pressure.