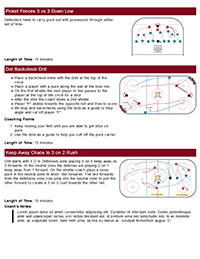 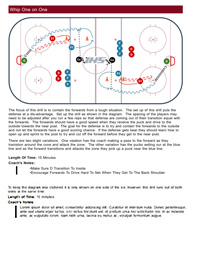 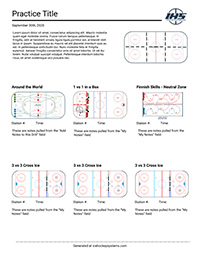 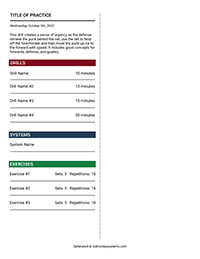 This practice plan is focused on fun and engaging competitions for players to use their skills to battle and work together. Modify the goals or points systems in each game based on your team's level and ability.

This practice encourages age-appropriate situations for 1v1, 2v2, and 3v3. A great way to build instincts, teamwork and skills in fun, game-like situations.

The 3 vs. 3 Handball Game from Topher Scott of The Hockey Think Tank is a fun game that reinforces offensive principles. Teams will have to communicate and perform lots of give & go's to be successful. No sticks and no pucks. Use any type of ball: soccer ball, basketball, football or anything else (even an extra glove can work)!

A great way to get players to think about spacing and puck support. Start practice with this game to get the competitiveness started right away, while also encouraging communication and letting the players figure out how they can work together to score goals.

The major concept of the Gates of Buffalo Small Area Hockey Game is to practice moving to open space, communicating verbally and non-verbally with teammates, so they can score Goals by passing through Gates.

This game framework will help players learn to play with their head up, communicate with teammates and move to open space.

As a coach, If you commit to working on activities like this instead of memorization drills for a portion of each practice, you will marvel at how your team begins to work together. It will look extremely messy at first, but players will get better with each repetition. Moving to open space, and moving the puck will eventually become second nature to the team.

Why do we call this small area game "Gates of Buffalo?" The game has been called "gates" in the world of soccer and we decided to add Buffalo to it for two fun reasons: First, IHS has strong ties to Buffalo, NY. Secondly, the imagery of a Buffalo can help drive home to your youth players why you are practicing this game. If you do not pick your head up and use your teammates while playing the game of hockey, you run the risk of getting trampled by the other team. This can feel like getting run over by a Buffalo (physically or on the scoreboard). This game helps prevent both of those situations by forcing players to keep their head up while communicating and working with teammates to score goals.

Keep score based on number of successful passes made between the gates.

Add some competition to your practice with this drill while working on footspeed, agility, control turns, and scoring. If you have access to two nets then split your half of the ice into two equal sections as shown in the diagram. Line the nets up even with the face off dots and place one line on each side. The tires or cones should be set up as shown.

On the whistle players start by going to the outside of the first tire. At the last tire the players do a control turn all the way around the tire starting on the inside. The coach will  play a 50/50 puck towards the net and the players will compete for the puck the first player to touch the puck is on offense and the second player becomes the defender and backchecks against the player with the puck. 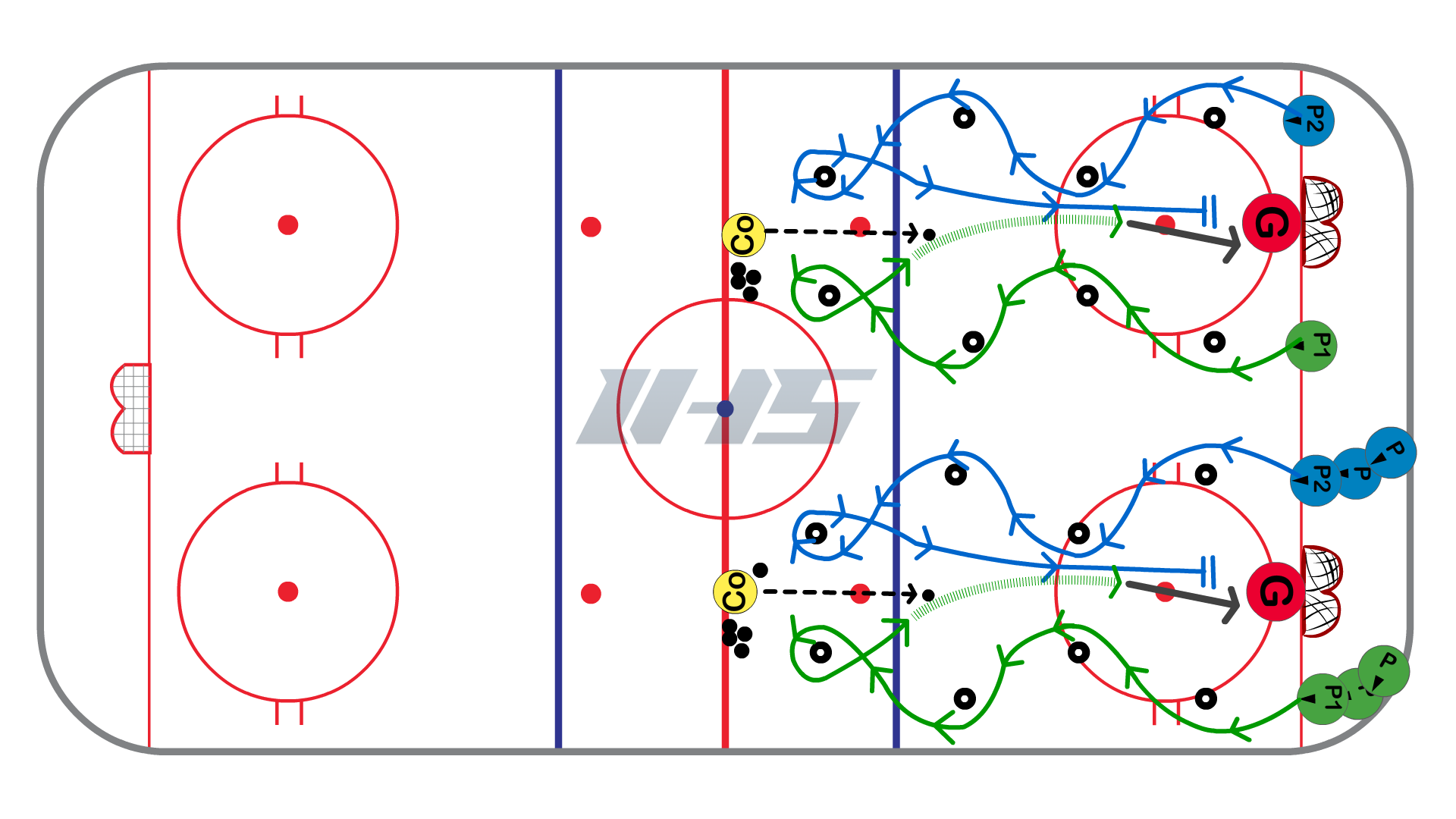 Corner Boards 1 V 1 Loose Puck Battle allows players & coaches to work on a very common play during the game, a loose puck battle along the boards. This is a competitive drill that can also progress to 2 V 2.

The Double Gates Activation Game from Coach Alyssa Gagliardi is a competitive small area game that starts out as a 1 on 1 and becomes a 2 on 1 after a player skates through one of the gates. This can also be modified to be a 2 on 2 that becomes a 3 on 2.

Progress the drill to start as a 2v2 with the opportunity to activated a third player to make it a 3v2.

The Union Scoring Small Area Game from Topher Scott is a fun small area game where teams can score on either net. The unique setup of the nets promotes creativity, thinking outside of the box to create time & space and score goals. 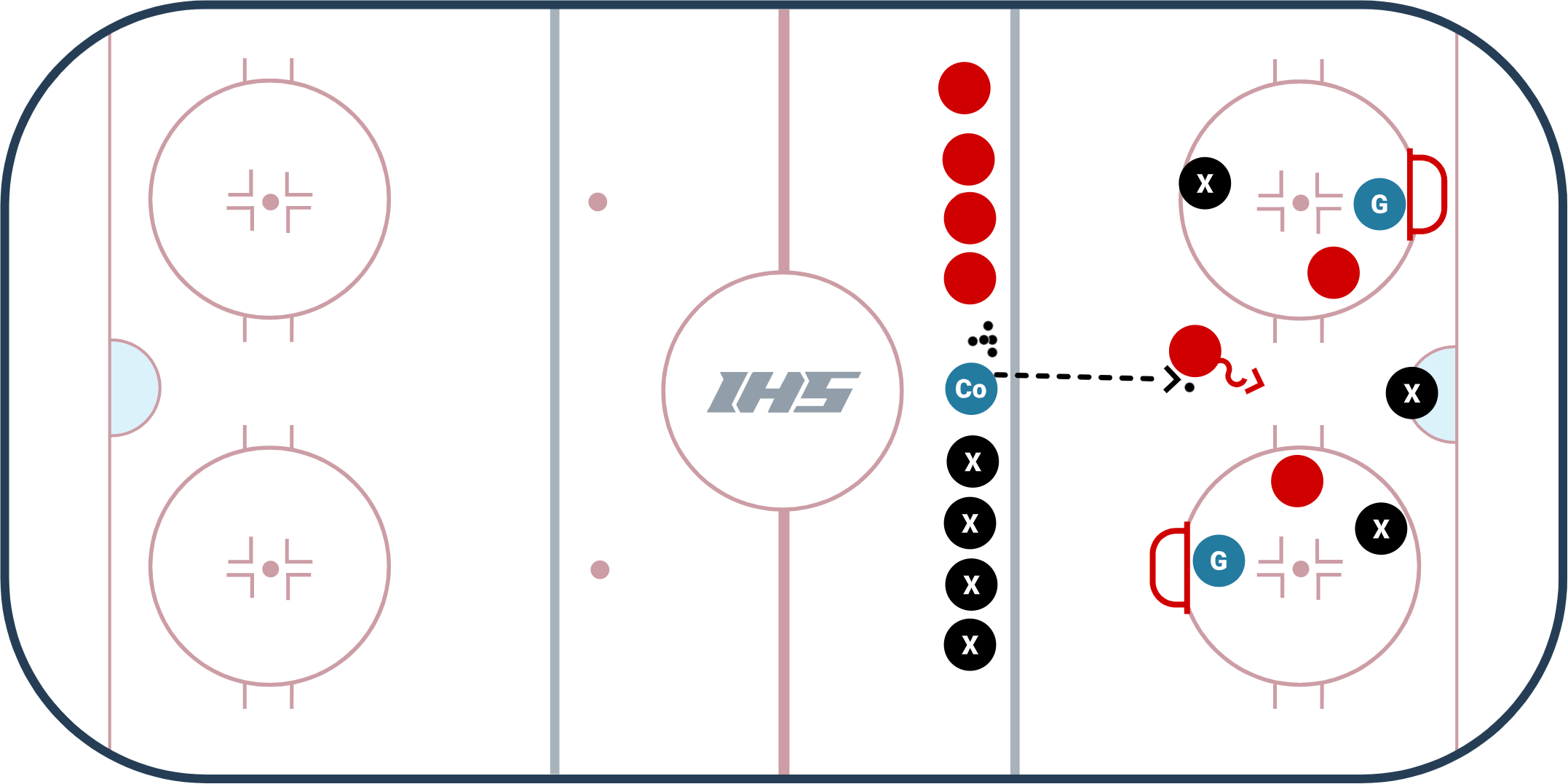