This practice is a 60-minute station based practice plan that works on puck control, passing, cycling, and shooting. It starts with a group activity / game and then the players are split into 3 groups and rotate between 3 stations. Each station is about 15 minutes. 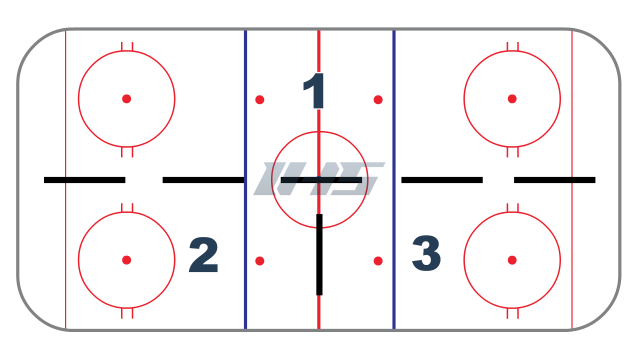 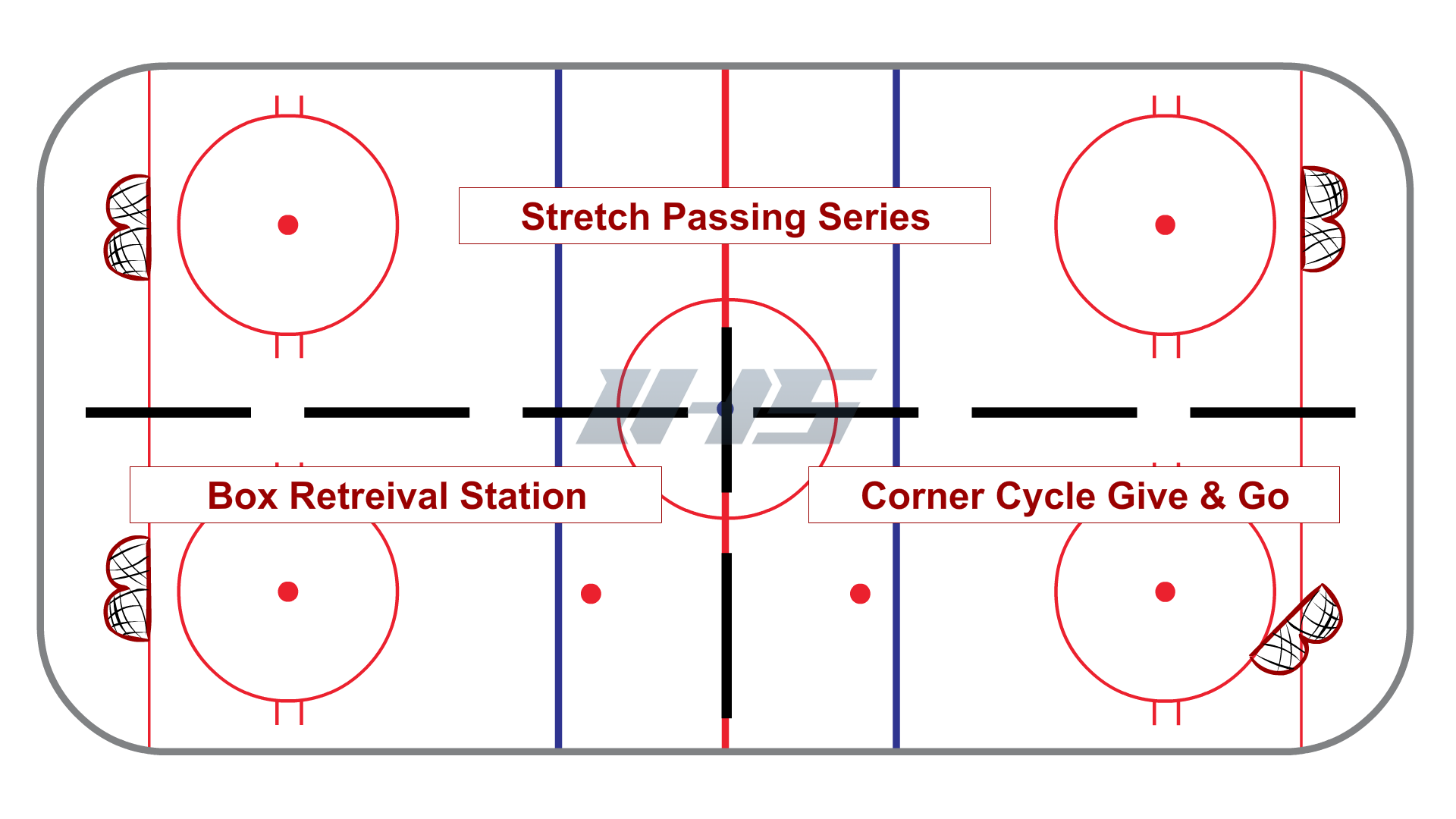 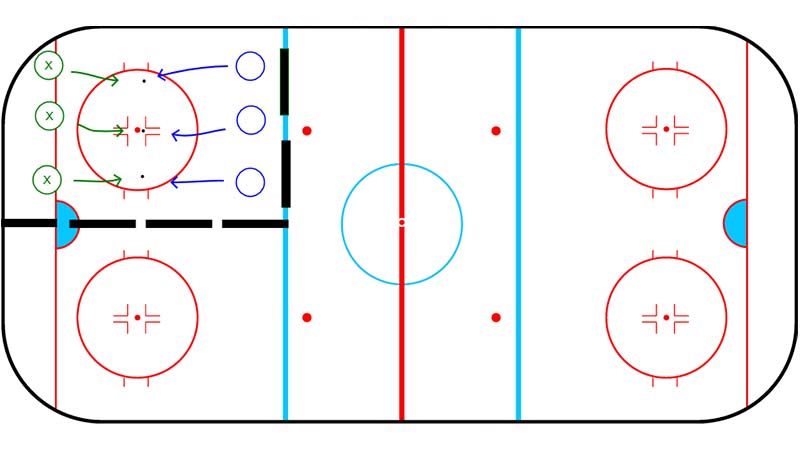 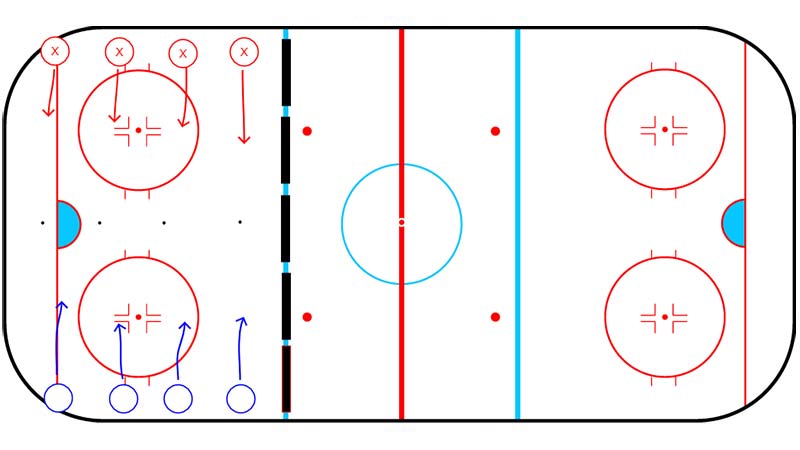 This is a great warm up hockey activity or station drill to incorporate into your practices. Players will love it and it helps ramp up the energy and excitement for practice. 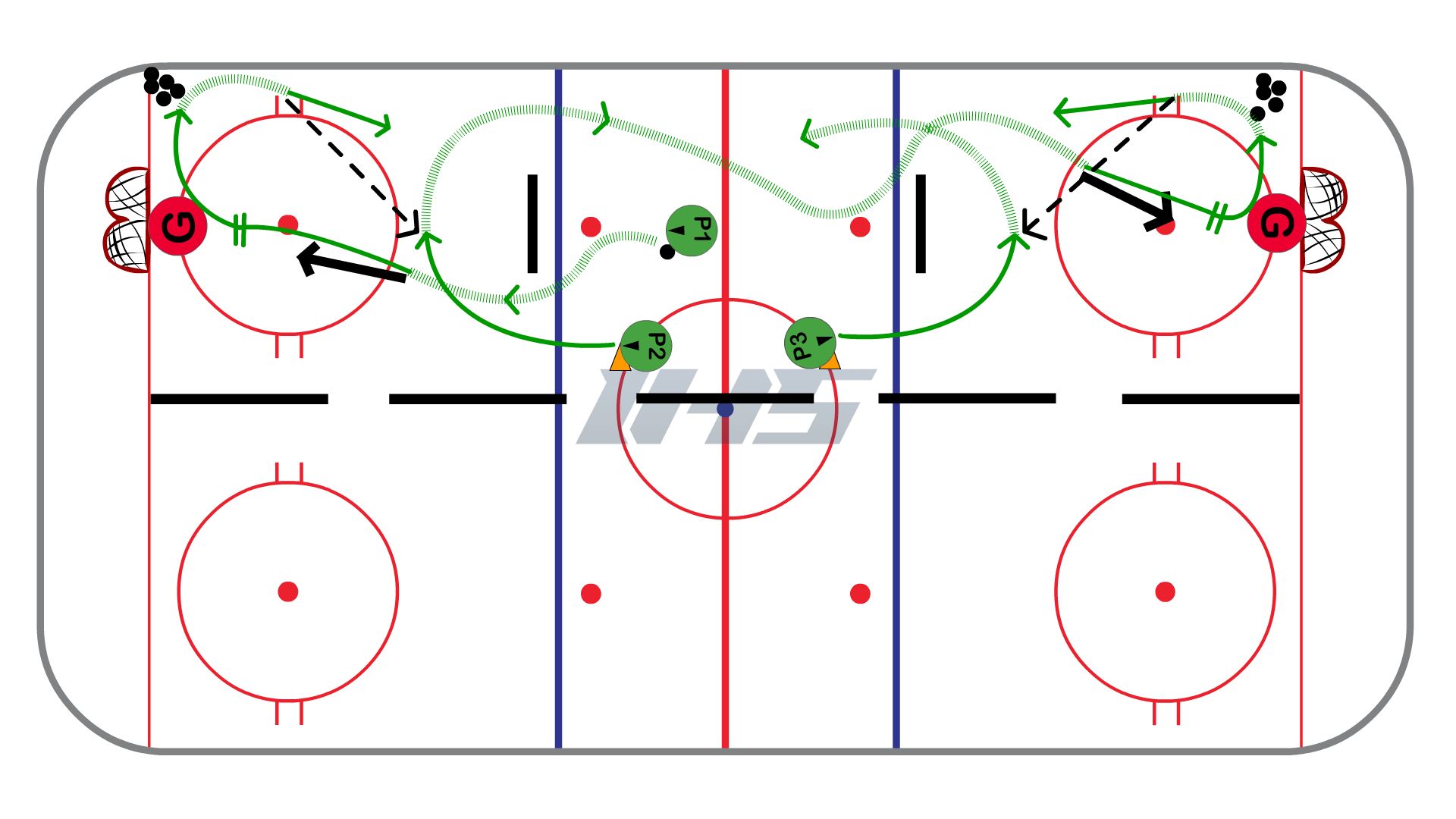 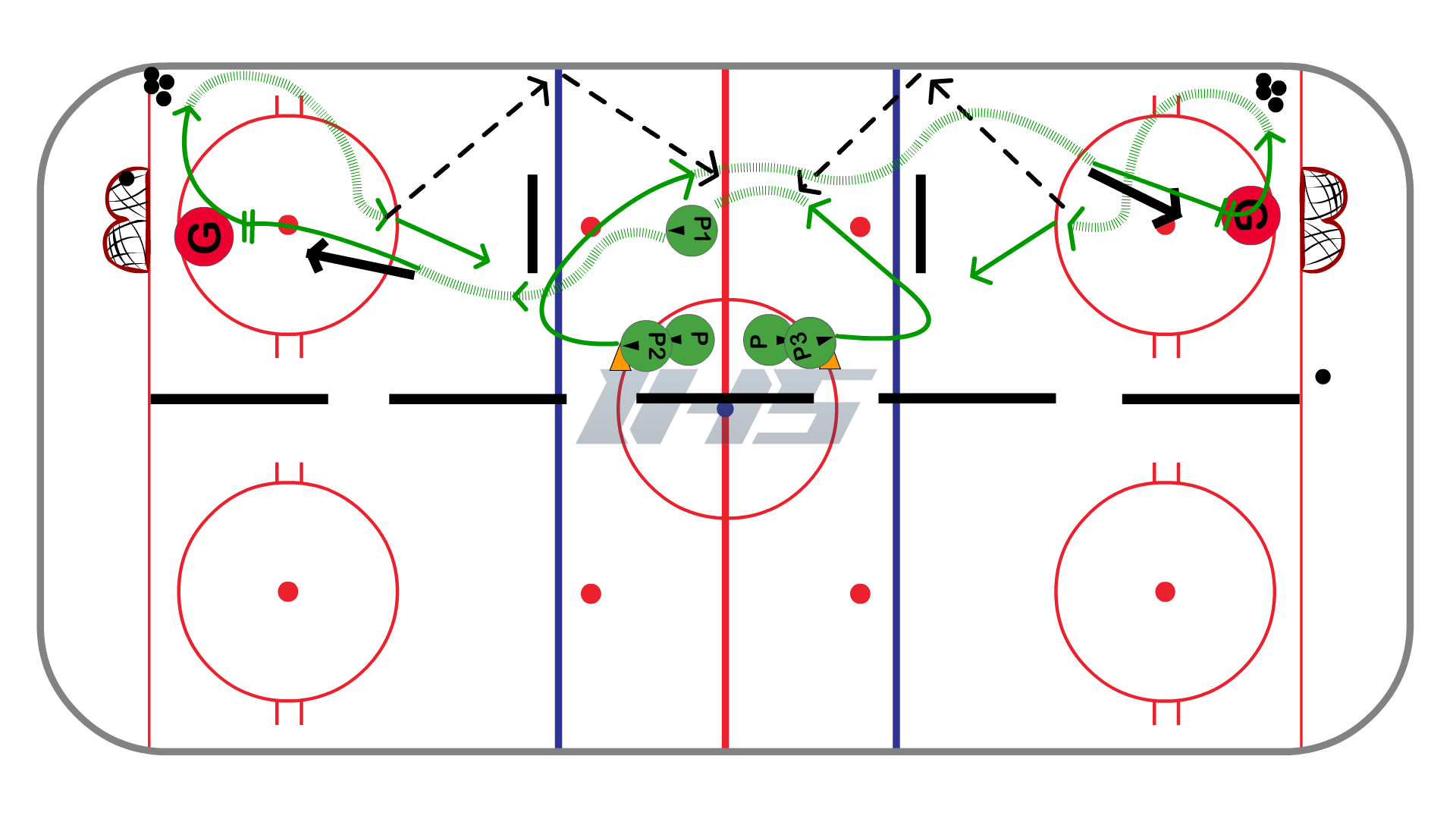 One down side to station based practices is that players don't get to skate the full length of the ice. Here is a station drill that uses half of the ice but the full length. This drill works on passing the puck up the ice using two different methods, a direct pass, and an in-direct pass (off the wall). The timing concept will most likely be the most difficult for the young players to grasp so it can be a good idea to place a coach at each line and let the coach dictate when to go.

One player will start the drill by carrying a puck through the neutral zone, make a lateral move around the barrier, and then take a shot. After the shot the player will make sure to stop at the net and look for a rebound then go to the corner to retreive a puck. Once player #1 has retreived the puck and is facing up ice then player #2 starts. Player #2 swings through just inside the pad showing their forehand and calling for the puck. They should receive the puck while facing the passer or slightly horizontal. After receiving the puck they will go down the ice, make a lateral move on the barrier, take a shot, and repeat what player #1 just did. Now the drill becomes continuous.

The next progression works the same way except now the pass is made off of the wall around the barrier. The receiving player will go behind the barrier to retreive the puck. They should time it so they are skating into the puck and NOT looking back for it. Everything else works the same as series #1.

If you want to add an element of intensity then you can add a backchecking element. The player that makes the pass will now backcheck against the player receiving the puck. This progression works best in series #2. 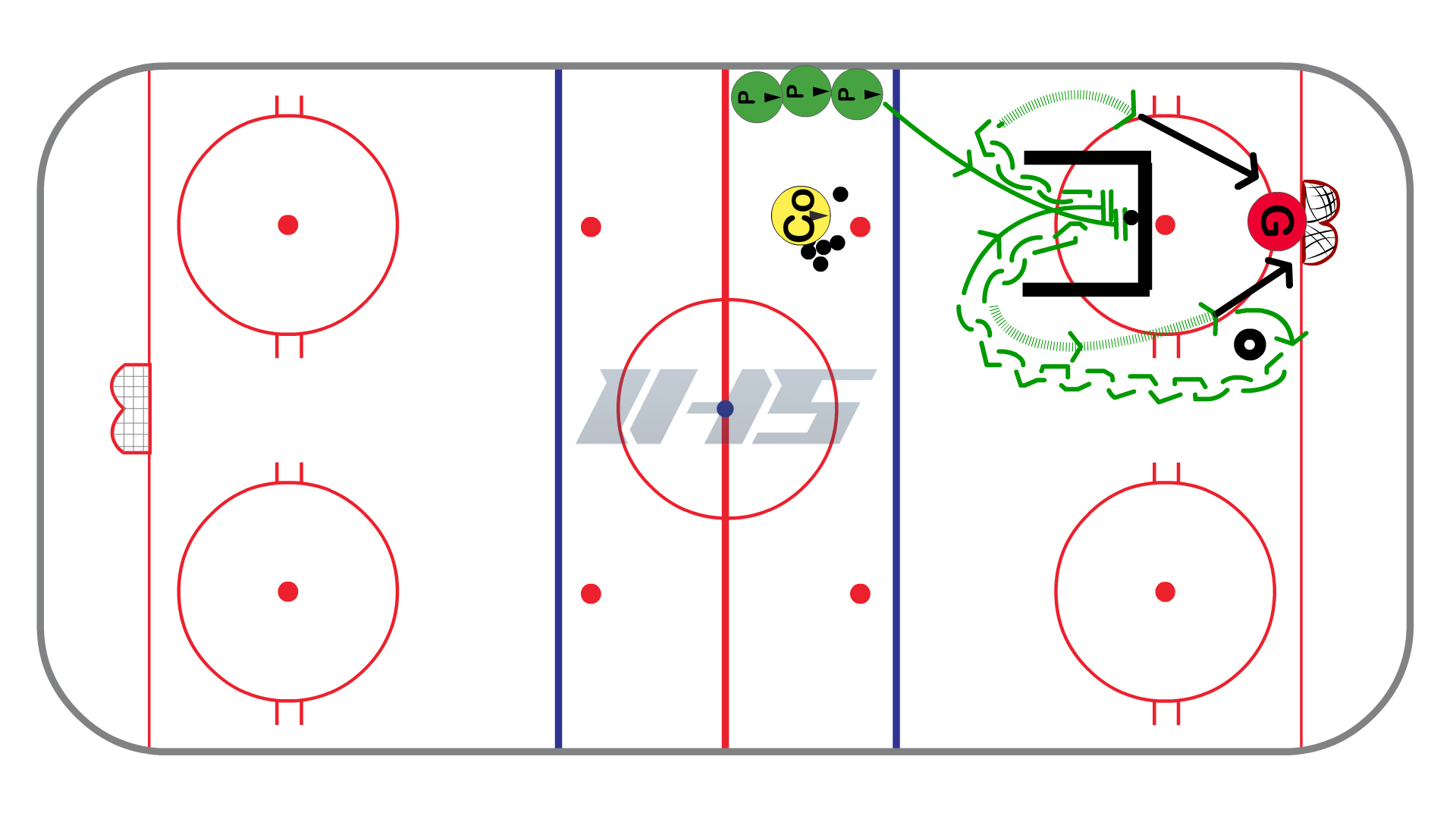 This is a good skill station that works on forwards to backwards transitions, backwards to forwards transitions, puck retrieval, and shooting. To set up this station you need three barriers, a tire or cone, and one net. Players will line up along the wall and the coach will have the pucks at the neutral zone dot (refer to the diagram). To start the drill: 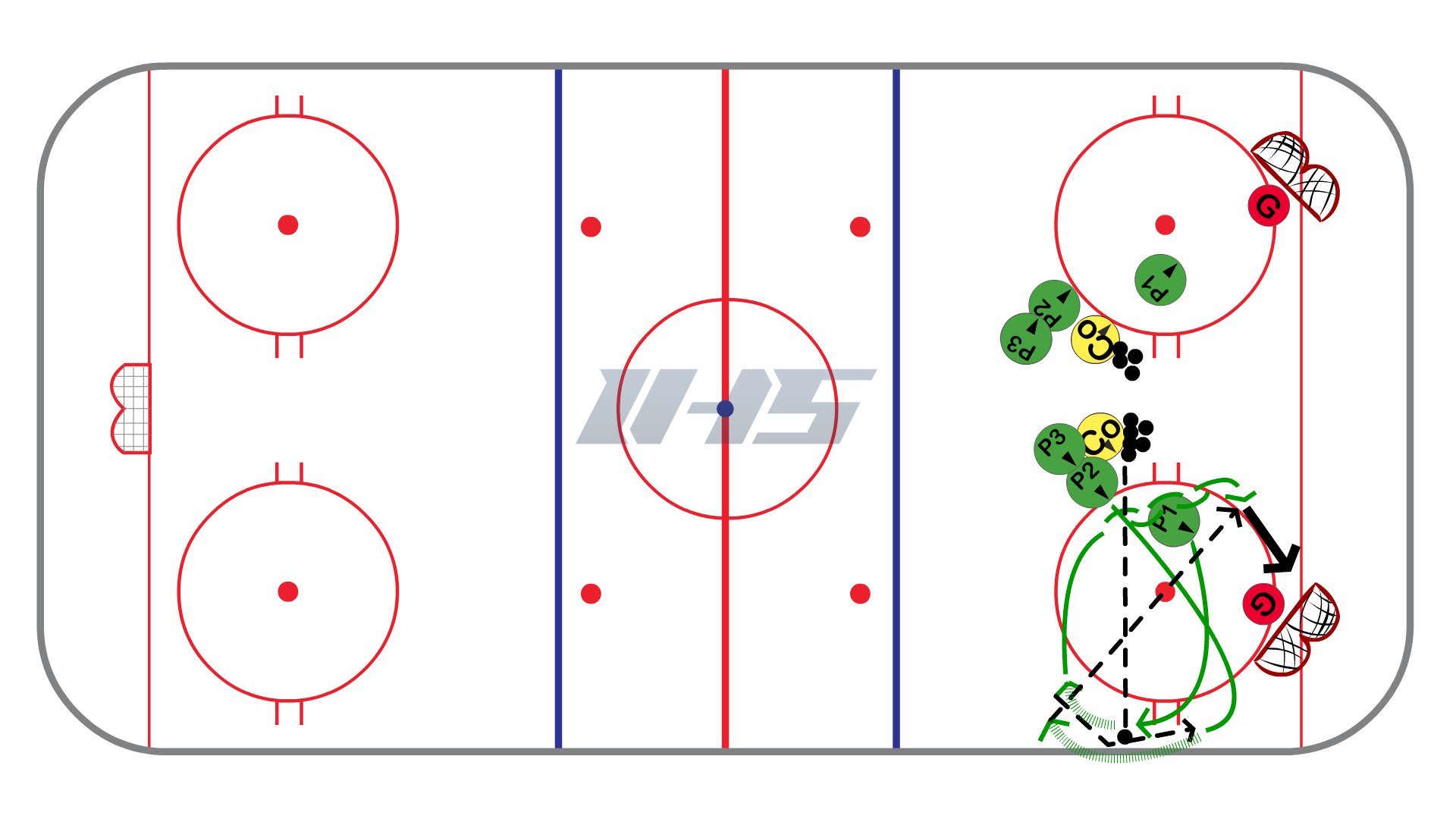 This drill can be used for station based practices or half-ice situations. It can be used as one station, or as shown in this animation you can set up two of these drills at one end of the ice. The concepts of this drill include cycling, opening up, and shooting off the pass.

To start the drill place a net in the corner as shown. The coach should have the pucks straight out in front of the net with a single line of players. The drill starts when the coach plays a puck to the wall. Player #1 (P1) will retreive the puck while Player #2 (P2) follows behind and calls for the puck. P1 will cycle the puck to P2 and then to the front of the net. If they are on their off-hand they will need to open up to show their forehand. P2 will give P1 a pass who will receive and shoot the puck. P1 then follows their shot to the net and then goes to the back of the line. P2 will now retreive a new puck along the wall and do the samet thing that P1 just did. The next player in line will then become P2 and call for the cycle and give a pass to P1 in front of the net. The drill continues in this way until the next whistle.