This drill starts with playersin two parallel lines on each side of the coach between the blue lines.  On the first whistle, one skater from each side skates forward and crosses over around low the face-off circle on their side of the ice and continue to where the blue line and boards meet where they stop and immediately begin to side-step across the blue line.  When they reach the line of forwards they stop and immediately skate forward to the redline where they side step across to the boards, where once again they stop, skate and finally side-step the blue line before one last stop and then crossover the low face-off circle before getting back in line.  Once the first skaters hit the blue line, the coach can blow the whistle and send the next two players in line.  There will usually be anywhere from 3 to 4 players completing the drill on each side of the ice at a given time.  It's a great drill to use to evaluate your player's skating abilities or to start a practice with.  It's also good to have the d-men do the drill skating backwards. 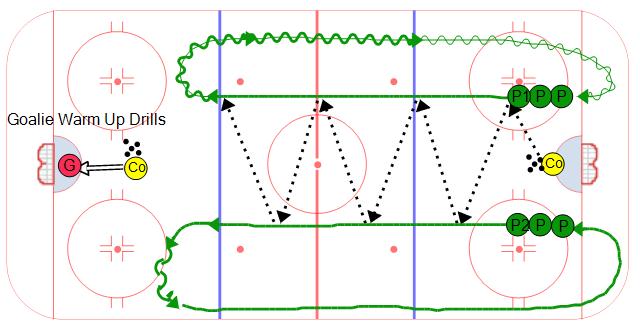 This hockey drill is a great way to start practice, the players get a lot of touches on the puck and you can emphasize skating aspects as well.  One way to start the drill is by having the coach make the first pass.  Once the first pass is made the players skate down the ice making as many passes as possible.  Once the players reach the far blue line they curl to the outside along the boards.  The player that has the puck makes a power turn and skates hard back to the far blue line.  This player should work on skating hard and maintaining control of the puck with their head up.  The player without the puck transitions so they are always facing the puck carrier.  As they turn up ice they sprint back to the far blue line.

The goalies can do their own warm up drills at the other end either with a coach or selected players. 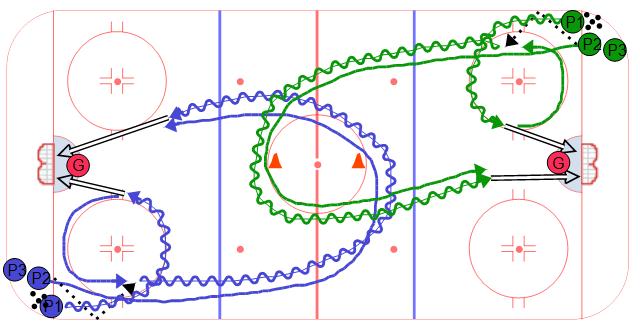 This hockey drill ramps up the competion.  It is a great competitive drill but make sure you have players of equal speed and strength going against each other.  At the start, the first player in each line carries a puck around the top of the face off circle and takes a shot on net.  After the shot the player continues around the circle.  The second player chips another puck off the boards and then chases the first player around the cones and back towards the net. 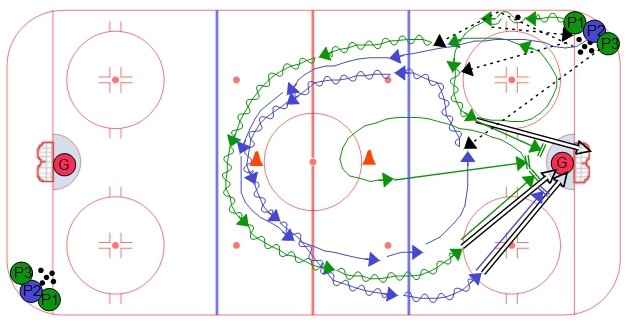 Here is a variation of the Chip & Chase drill.  This variation extends the length of each repetition so players are skating quite a bit.  The element of competition in this drill pushes players to skate hard.  Each repetition also incorporates 3 shots so goalies are active as well.  In this diagram it only shows the drill out of one end but you can run it out of both ends at the same time.

The drill starts by player 1 skating a couple of strides out of the corner with the puck, transitions backwards, makes a pass to the next player in line, and then goes to the slot to receive a return pass.  Player 1 takes a quick shot after receiving the pass and stops at the net.  Then they skate around the dot, player 2 chips the puck off the wall from the goal line and then persues player 1 from behind.  Player 1 carries the puck around the far cone with player 2 chasing them from behind. If player 2 catches player 1 then they can knock the puck away.  Player 1 tries to gain the zone and take a shot from the top of the circles and follow the shot for a rebound.  Player 1 then stops and sprints out of the zone and times their drive to the net with Player 2's rush.  Once inside the blue line player 2 swings through the zone and receives a pass from player 3.  Player 2 carries the puck out throught the neutral zone around the cone and back into the zone.  They should take the puck wide and shoot from outside.  Player 1 is driving the net looking for a rebound. Both players should stop at the net.

The focus of this drill is to contain the forwards from a tough situation.  The set up of this drill puts the defense at a dis-advantage.  Set up the drill as shown in the diagram.  The spacing of the players may need to be adjusted after you run a few reps so that defense are coming out of their transition equal with the forwards.  The forwards should have a good speed when they receive the puck and drive to the outside towards the near post.  The goal for the defense is to try and contain the forwards to the outside and not let the forwards have a good scoring chance.  If the defense gets beat they should learn how to open up and sprint to the post to try and cut off the forward before they get to the near post. 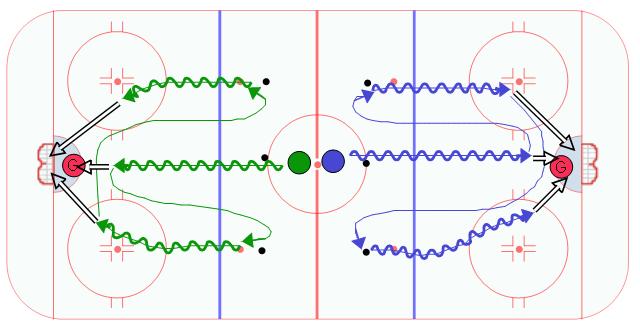 This is a fun ice hockey drill that will also give your players some conditioning as well. It can be done with 4 or five pucks as well if you really need to get your team in shape. Give your players a time limit that will make sure they go full speed. You can also make it interesting when you make the loser of each round keep going until they win. Once they win they are done with conditioning. Keeping things competitive and giving them something to compete for will fire up the intensity.