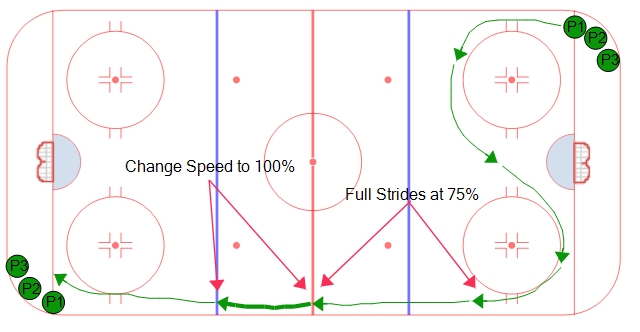 The overspeed variation works on changing speeds.  Players can line up in opposite corners and go two at a time.  The players need to have quick feet as do cross overs around the top of the circle then bottom of the other circle.  Then they skate in a straight line down the ice at 75% focusing on good, hard, full strides.  Between the red line and blue line they increase their foot speed to 100%, then back down to 75%. 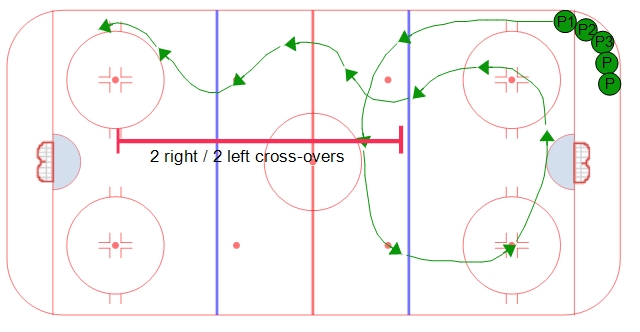 Another skating progression to incorporate into a warm-up with a lot of skating.  This has lots of variations and it is easy to come up with your own twists to this drill.  Pucks are also easy to incoporate many ways.  A few variations that incorporate pucks will soon be published.

This progression still focuses on quick feet and an emphasis on overspeed skating.  In this variation the skating route is a larger circle which should allow for more speed as they leave the zone.  The players should stay just inside the blue line and just inside the dots as they make a large circle in the zone.  Explain to the players their power will come from the cross under and to use a full extension so they get the most out of each stride.

As the players leave the zone they will do two cross overs in each direction all the way down the ice.  Quick lateral movement that is gained by exploding off the outside edge of the leg that is crossing under should be a point of emphasis. 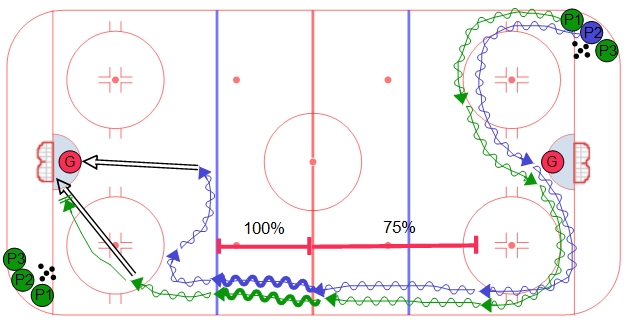 After completing a couple of repetitions without pucks you can get the goalies involved with some shots.  The only difference between this variation with pucks is that the two players attack the zone in different ways.  The first skater will carry a puck wide into the zone and take a wide angle shot.  The second skater will use the inside edge of their outside skate to cut to the middle of the ice and take a shot from the high slot.  Players from both ends can go at the same time depending on the amount of skaters on the ice. 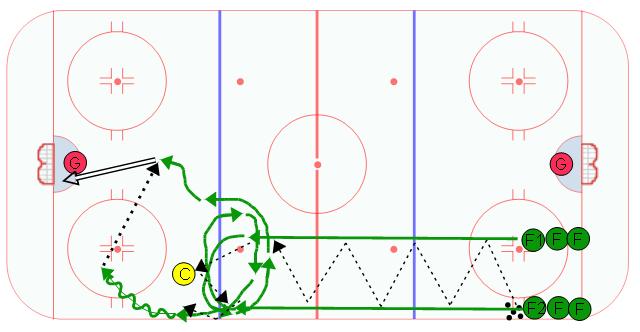 This drill is a fast moving warm up drill that get each player a lot of touches and goalies a lot of shots.  Ptwo lines in the corner, one at the face off dot and one along the boards.  If you have two goalies and enough players you can run it out of both corners at the same time.  A coach or player should also be stationed just inside the far blue line.  The first two players pass the puck down the ice until towards the coach and pass them the puck just after they cross the red line.  The two players then swing in front of the coach and receive a pass back from the coach.  Once they receive the pass the two forwards transition right back towards the coach and attack the net 2 on 0.

This hockey drill ramps up the competion.  It is a great competitive drill but make sure you have players of equal speed and strength going against each other.  At the start, the first player in each line carries a puck around the top of the face off circle and takes a shot on net.  After the shot the player continues around the circle.  The second player chips another puck off the boards and then chases the first player around the cones and back towards the net. 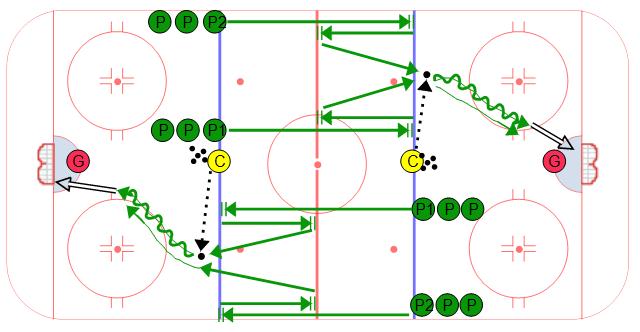 This is a good 1 on 1 battle drill.  Think about using this drill towards the end of practice for conditioning as players tend to push themselves more when competition is introduced.  To set up place four lines on the blue line as shown in the diagram. Place a coach in the center of the ice on each blue line with a bunch of pucks.

If you are focusing more on conditioning you can increase the the amount of lines the players are required to skate before racing for the puck.