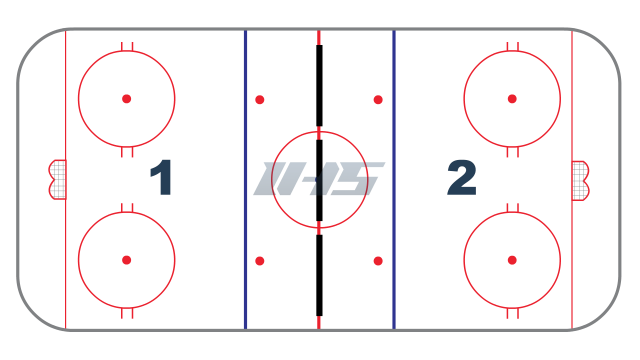 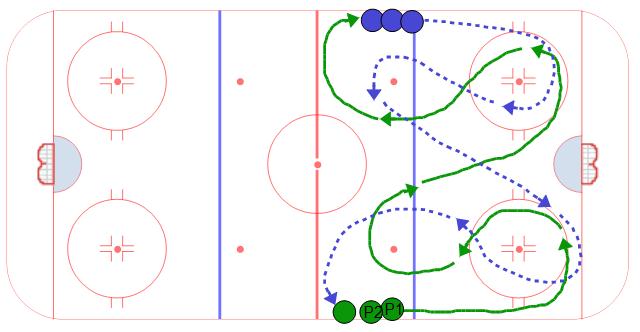 Here is a good hockey skating drill to do in warm up or at the end of practice.  Set up two lines at each blue line along the boards.  Players will go in groups of two for the sake of competing.  The first player tries to not let the second player catch them.  Have the players focus on moving their feet the entire time at an uncomfortable pace.  Once the players get to the end of the other line the next two players from that line can go. 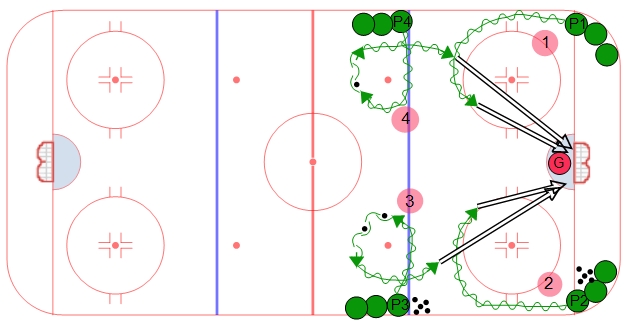 Each repetition consists of four shots. The repetitions are started on the whistle in which P1 carries the puck up the wall around the top of the circle and shoots. After the shot F2 does the same thing out of the other corner. After F2 shoots the puck then P3 carries the puck along the blue line and transitions around the face off dot so they are always facing the net. P3 then carries the puck into the zone and takes a long shot on net. Again, once the shot is taken then P4 does the same thing from the other side. Players out of the first two lines should work on moving their feet all the way through the shot. Players in lines 3 & 4 should work on controlling the puck while in transition and keeping their head up, especially as they enter the zone.

It is also important to remind players in the corner to move the lines up so they do not get hit by pucks that miss the net. On the same subject it is good to emphasize hitting the net!

This is a variation of the Eagles half ice 1 on 1 drill.  Now we add a forward to make it a 2 on 1. The forwards all line up in the corner without pucks.  The defense line up just inside the forwards with the pucks as shown in the diagram.  To start the drill F1 skates up along the boards and receives a pass from D1.  F1 receives the pass, skates around the circle and takes a shot on net.   F1 then continues around the circle.  F2 follows F1 out of the corner and also receives a pass from D1 out of the corner.  After their shot, F2 tranisions around the bottom of the other circle to receive a breakout pass from D1.  F1 times their break into the slot to receive a pass from F2.  F1 and F2 then continue outside the blue line and transition back against D1 in a 2 on 1 situation. 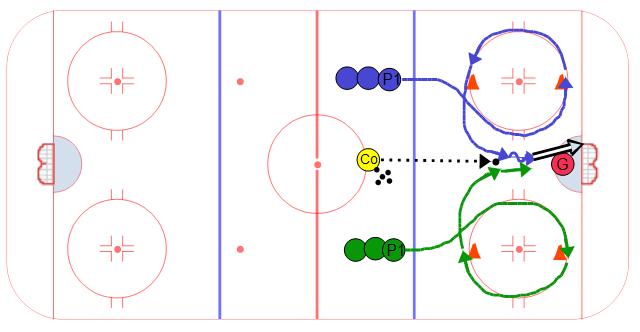 This drill is simply geared towards overspeed for forwards in the offensive zone.  To set up, the coach gathers the pucks in the middle of the ice just outside the blue line.  Divide players into two teams and line them up starting on the off sides face off dots.  To minimize the cheating place a couple of cones at the top and bottom of the offensive zone face off circle.  On the whistle the players have to skate around the circle, staying to the outside of the cones.  The coach will play a puck into the high slot.  The first player to get to the puck is rewarded with a scoring chance. You can even make it more challenging by making them go around the circle 2 or even 3 times.  If you go more than three you start to lose the overspeed effect. 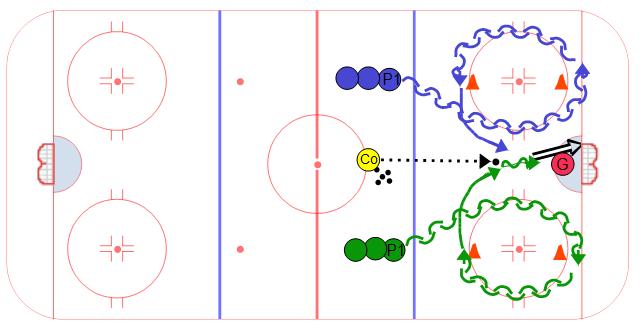 This drill is just like the Forwards overspeed drill but geared towards the footwork of the defense.  The players are split into two teams and the start of each line is placed on the off sides face off dots.  The coach has the pucks in the middle of the ice just outside the blue line.  Players have to start facing the coach.  On the whistle the players go into the their backwards crossovers to get speed offf the line.  They continue backwards around the circle.  At the top of the circle where the cone is placed they transition to a forwards skate and race for the puck.  Again, the first player to the puck is rewarded with a scoring chance. 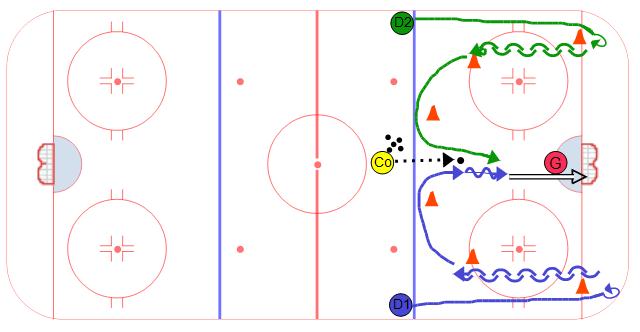 We have numerous overpeed races geared towards forwards so here is one that focuses on footwork for defense.  Similar to the previous drill, the coach will have the pucks at center ice just outside the blue line.  Set up cones or discs as shown in the diagram.  Two lines of players are required, each along the boards at the bliue lines.  On the whistle the players skate forward and transition towards the middle of the ice around the cone on the goal line. They skate backwards as fast as they can to the cone at the top of the circle.  At the cone they open up their hips and pivot forwards to skat around the cone in the middle. Emphasize no cross-overs.  In fact you can make a rule that a player is disqualified if they use cross-overs to transition to forwards.  The players then race to the puck that is placed in the slot by the coach.  This forces players to move their feet faster than what is comfortable.

The objective of this game is to score 5 goals before the other team scores 5 goals.  To set up the game line up players along the blue line as shown in the diagram.  Place 5 pucks in front pf the players as well.  On the whistle, the first player from each team carries a puck around the net and attacks the other net.  If the player scores then the next player from their team can go right away.  If they miss, then the player must retrieve the puck and pass it to the next player in line.  Each player must go around their own net before attacking the other team's net.  The first team to get all five of their pucks in the net wins.