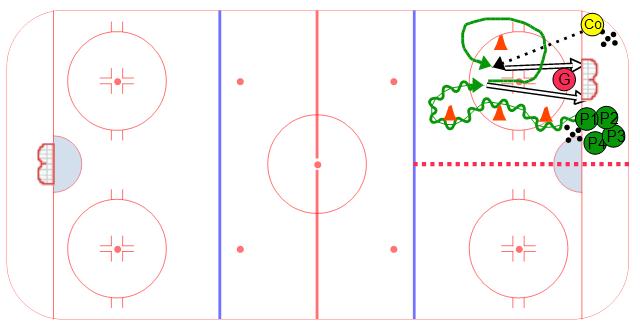 This a hockey drill for mites or teams that are using a lot of shared ice practices.  The drill allows players a chance to use their inside edges while handling the puck, shooting, and receiving a pass.  Place a net along the goal line in line with the dots as shown, a coach with pucks in the corner, and a line of players on the opposite side of the net.  Three or four cones can be place in front of the players and one cone on the opposite side at about the hash marks.  The players carry the puck through the cones so that they are protecting the puck from the cone.  As they come around the last cone they turn back towards the net and take a shot as quickly as possible.  After the shot the player turns to the boards, circles the around the cone and receives a pass from the coach for another shot on net.

nobody special on 3/28/2018
really? have the player turn their back to the passer after the initial shot and then shoot toward the line of players? no thanks, will pass on this very dated drill
tygretzky on 3/22/2018