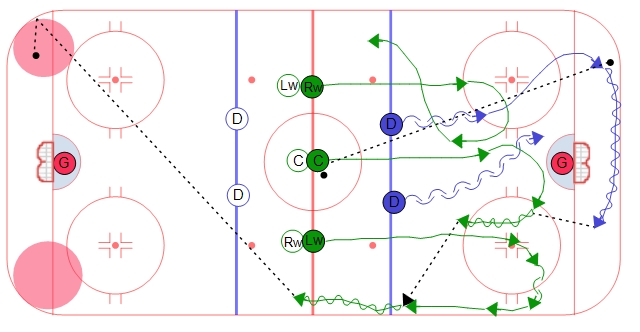 This is one of many continuous breakout drills that is great for pre-game practices and a practice that consists of flow drills. This drill starts by dumping the puck to the corner. Three forwards and two defense start in the neutral zone and they breakout using a pre-called breakout, in this case it is "Wheel to Center". As they are breaking out the next unit comes out to the neutral zone. After this unit breakouts out they will dump the puck into one of the corners. The next unit will then breakout using the same pre-called breakout. After a few repetitions change the pre-called breakout so you can practice as many different breakouts as you can. Possibilities for the breakouts include, but not limited to, the following: