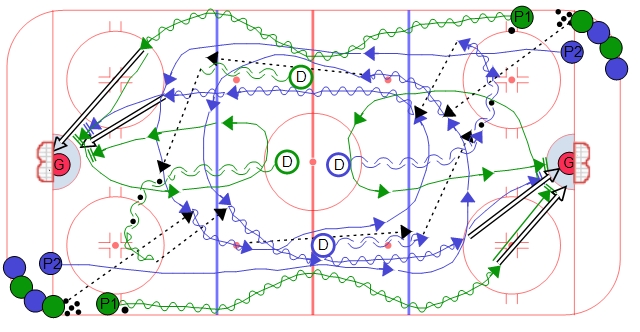 Great drill here if your looking for a flow drill that involves a lot of players, passing, shooting, and skating.  The setup is similar to the typical horseshoe drill with two lines in opposite corners with pucks except now there are four defense at center ice as shown.  Two players from each line will go on the whistle.  The first player will start at the hash marks with a puck, the second player will start on the goal line and put pressure on the first player from behind (the goal is to catch the puck carrier if possible).  The first player should attack the blue line inside out and take a shot from the top of the circles and follow their shot to the net.  The first player will stop at the net and then sprint out to the neutral zone to time their entry back into the zone and hunt a rebound.  The second player will swing through the neutral zone and receive a pass from the opposite corner. They will carry the puck to the red line and make a pass to the defense.  The defense will pass the puck from defense to defense and then pass back to the second player as they swing through the neutral zone.  The second player then attacks the zone and takes a wide angle shot with the intent of creating a rebound for the player hunting a rebound.  After a few repetitions have two new defense replace the defense in the middle and keep rotating every couple of repetitions.