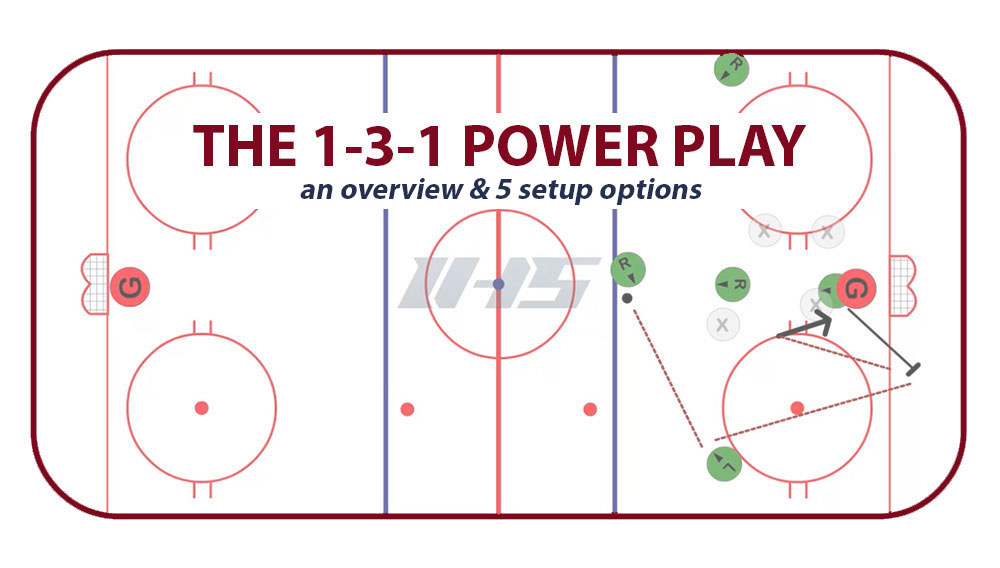 The 1-3-1 power play formation has become the go to power play system for most high level teams.  Almost every NHL team is using the 1-3-1, so there must be a reason. The reason? The 1-3-1 has the ability to spread players out inside the zone, keep a player in front of the net at all times, and place shooters in key positions so they can shoot off the pass.

Power play systems like the overload, umbrella, set pick plays, etc... can be effective until the other team knows how to play against them.  The 1-3-1 formation allows teams an endless amount of options and gives teams the ability to get into other formations very quickly, adding an element of surprise and confusion to the penalty killers.

In this post, we dive into how to setup the 1-3-1, a highlight video of the Washington Capitals using the 1-3-1, 5 options for the 1-3-1 setup, deceptive point examples from Roman Josi, and a variety of drills your team can use to improve their power play.

Four important factors when using the 1-3-1

When setting up the 1-3-1 it is important to try to get the puck at the top of the zone in the middle of the ice with full control.  The options below all use a strategy of getting the puck to the point and spreading the ice by going D to D, then back to the player at the top.  It is important to outnumber the opponents on any loose pucks and get the puck up high, then go D to D and stretch out the penalty killers.  Once you have full possession in the middle of the ice at the blue line you have many options.  Below we show a video of the Washington Capitals executing the 1-3-1 along with five options that are animated and described in detail below.

Sit back, grab some popcorn and have fun watching an 8 minute highlight montage of the Washington Capitals putting the 1-3-1 power play setup in action. Notice how they setup the 1-3-1, the point work, the variety of plays that can be made from the 1-3-1 setup, and how often they shoot quickly off of a pass (which makes it hard for the goalie to stop).

Below this video you will see 5 options that show potential 1-3-1 setup plays that your team can use along with drills your defenseman can use to improve their puck handling at the point.

If you have ever spent time watching the Nashville Predators then you most likely saw them trying to use this option. In the demonstration below we used the right side of the ice which placed a left handed forward on the half wall, a left handed player in front of the net, two right handed players on the point, and a right handed player in the slot.  The puck is worked around the perimeter to keep the penalty killers moving and hopefully create a bit of confusion.  When the puck gets to the half wall on the right side of the ice then the left handed player in front of the net slides out and presents their stick.  The penalty killers stick position is important. If they do not take away the pass then the pass goes down low.  The right handed player then slides down for a one timer.  It needs to be a bang, bang pass and shoot play.  Once the puck goes down to the low forward the right hand defense on the other side of the ice needs to crash the weak side post looking for a rebound.  They have to anticipate that once the puck goes low then the shot will be coming from the player in the slot.

This option uses the same side of the ice and again uses the player in the middle as the shooter.  Instead of the shooter receiving the pass from the player down low there will be one more pass back to the left handed player on the half wall.  This player will then look for the right handed player in the middle of the slot for a one-timer.  The player down low has to get to the front of the net once they pass the puck back to the half wall and anticipate that shot.

Once again the play should start high in the middle of the zone around the blue line.  This option can work from either side regardless of the personnel or which side you are trying to favor.  This option has the player at the top taking a shot from the point through a double screen.  The puck can get worked from low to high and when the puck is high you want the player in the middle and the player in front of the net slightly staggered so that there is absolutely no way the goalie can see the puck.

The player shooting the puck needs to keep the puck 4-6 inches off the ice and just hit the net.  With two of your players plus the penalty killers that will add to the bodies in front the goalie will have a heck of a time tracking the puck.  HIT THE NET and look for rebounds in this option.

If you have some dynamic forwards on your power play this may be an option they can favor because it can open things up and confuse the penalty killers quite a bit.  From the half wall the player moves it down low and then goes to the net similar to the typical give and go.  However, the player down low will carry the puck up the wall, wait for the player going to the net to clear a lane to the shooter, and make a pass to the shooter in the slot that is "posted up".

For this option to work you need to have a right handed player in the shooter's position in order to run it on the left side of the ice and a left handed shooter to run it on the right side.  There needs to be some communication between the player on the half wall and the shooter and they need to be on the same page.  The player on the half wall is going to be selling the shot from just outside the dots.

In addition to setting up the 1-3-1 Power Play correctly, it is beneficial to have a defencemen that is comfortable with moving the puck. Being able to move the puck and fake the team going to opposite directions will open up passing lanes and shooting opportunities. In the video below, we show Roman Josi's dynamic ability to move the puck around the ice during the course of one power play shift.

As a coach, it is important to work with your defencemen on various options and fakes they can use. It will take time for a defencemen to hone in their confidence at the point. At the bottom of this post we provide 3 drills that defencemen can use to practice their puck control on the blue line.

Drills to Help Defenceman On The Point

Activities For Your Team to Practice Moving The Puck

Tony Granato on 11/13/2018
This is clearly the best power play system to run if you are looking to get the most scoring options. Hope any coach that reads this will immediately convert their power play to this. You will find the most success in this system if the right intellectual players are put on the ice. On a side note, it is better to have the side shooters on their off hands to be able to attack the net off the pass. This will make for a quicker attack and better scoring opportunity.
Anonymous on 10/21/2018
Great options for many levels
Coachclifford19 on 10/1/2018